This story was posted 2 years ago
in Health
4 min. read 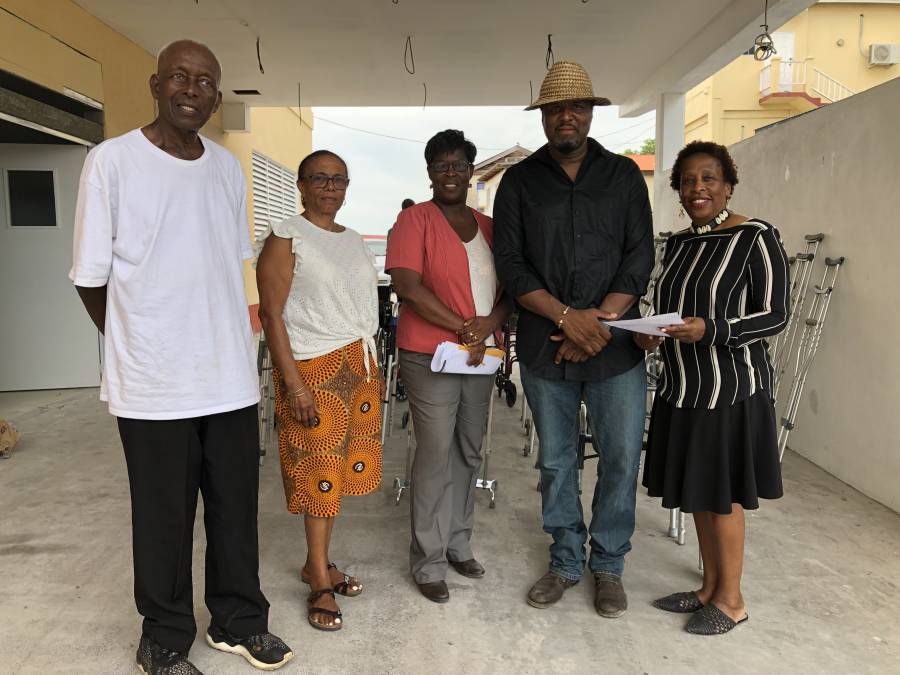 Following a 3-month wait before being able to clear durable medical equipment designated for the General Hospital through customs, New York-based Grenadian attorney at law, musician and philanthropist, Denison Forrester George was elated to be finally able to deliver these items to the Director of Hospital Services, Dr Carol McIntosh.

On Tuesday, George handed over two special wheelchairs, 14 essential rollators, and 35 pairs of crutches to be used throughout the health sector. This type of large scale philanthropical work which has been carried out by George for the last 3 years, started several years prior on a smaller scale after the release of his song “Grenada Will Rise Again” in 2004. The song’s proceeds were donated to assist in the reconstruction following the devastation caused by Hurricane Ivan. Last year a similar donation of durable medical equipment, including two kidney dialysis machines, was made to the Princess Alice Hospital.

During that time, toiletries were also donated to the Cadrona Home for the Aged and 150 gallons of paint were donated towards the repainting of the St Andrew Methodist School.

The cost to ship these items he said comes directly from his own pocket out of genuine love for his country and for the development of Grenada healthcare system. However, he said there must be an easier way to facilitate donations from Grenadians in the diaspora who wish to give back. “We had some bumps in the road of getting it here and I am sure everyone can learn from the mistake because it stayed on the pier for about 3 months before finally receiving a letter from the Ministry of Finance which I thought was ridiculous. But I don’t want to really criticise, it’s here and I am happy that it is here now. There are a lot of people who I know want to give back to Grenada, but the process has to be encouraging,” said George.

News of the difficulties faced by George and his team in getting the items through the customs department became a major talking point on social media. However, Director of Hospital Services, Dr Carol McIntosh reminded Grenadians within the diaspora who wish to donate towards the Grenada health sector to be mindful that there is a system in place to streamline the process.

In January 2019, the Focal Point Donation Desk was reestablished at the Ministry of Health for the coordination of donation of health supplies.

Guiding principles established by the Ministry of Health to guide the donation process are listed on their web page and include:

Dr McIntosh was extremely grateful to receive the donation adding that it goes a long way in assisting patients in their recovery after being dispatched from hospital. “People of colour, we are hit hard by diabetes, strokes, end-stage kidney chronic diseases and with that comes patients who are becoming paraplegic, paralysed and being unable to walk. We are a low to middle resource country so we don’t have a lot of access to a lot of funds to be able to do this, therefore, these items will assist us not only for patients in hospital, but afterwards.”

While encouraging donations of this nature, Dr McIntosh also admitted that they are aware that there are challenges throughout the process of donating supplies for the health sector. In apologising to George for having experienced such difficulties, she reminded that special arrangements have been put in place at the Ministry of Health to facilitate the process.

“I apologise for the fact that this was just sitting on the ground here. There is a process that we have put in place to shorten that and what happens that not every part of the government is part of the donations. The Ministry of Finance, Customs and VAT have their work to do. So that’s why we have now created the donation table which is made up of Ester Henry-Fleary who is our former director of hospital services, and others who are working together to make sure that the information and equipment coming in, once we get information about that through the General Hospital, we can then put into process the pathway.”

George’s next project will be to beautify and provide lights for the Paradise Bridge. He is also launching a fund to help rebuild the St Andrews Methodist School. Thus far, close to $50,000 has been spent on providing medical supplies to Grenada.