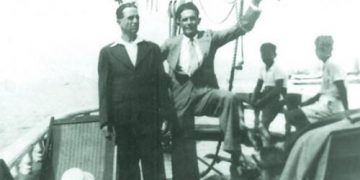 Island Queen disappeared without a trace 75 years ago

Island Queen disappeared without a trace 75 years ago

This story was posted 2 years ago
in Feature, History, Video
5 min. read
Share

Today 5, August 2019 marks the 75th anniversary since the mysterious disappearance of the schooner Island Queen.

On 5 August 1944 both the Island Queen and another vessel, the Providence Mark, set sail just one year shy of the end of World War II on 2 September 1945. Aboard was Chicra Salhab, a Syrian-Lebanese captain who was quite popular at the time, along with 67 passengers and crew all headed to Saint Vincent and the Grenadines. Among the passengers were students from St Joseph’s Convent St George’s and Anglican High School.

However, as fate would have it, only the passengers and crew aboard the Providence Mark were able to reach safely to their destination. There was also no trace of the vessel nnor the bodies aboard the Island Queen.

75 years later there still is no concrete evidence to indicate what transpired that day or what tragedy struck the passengers and crew to prevent the schooner from reaching Saint Vincent. Today, not much is spoken of that incident nor is there any national recognition for those lives lost at sea.

Historian, author and retired resident tutor at the University of the West Indies, Beverley A Steele, has extensively researched the vessel’s mysterious disappearance by interviewing the relatives and friends of those lost. Her findings led her to publish her book in 2011 entitled “Grenada in Wartime: The Tragic Loss of the Island Queen and Other Memories of World War II.”

“Now there is a historical method of writing history from what people tell you, and you must hear the thing at least 3 times for you to write it down as history; 3 separate people can’t remember the same thing exactly how it happened… but it was pretty easy to get confirmation because the experiences were similar,” said Steele.

She continued, “Some of it is written in the narrative, but there is a section at the rear of the book where I gave a short biography of each person as much as I can find out because these people were lost at sea. There is no tombstone, no memorial nothing for them… I wrote this book mainly for the survivors and I hope that the little memorial at the back of it will stand as a sort of comfort.”

At the time when the vessel came up missing, it was declared that a fire onboard the ship may have caused the shipwreck of the Island Queen. This was further corroborated by sighting smoke on the horizon off the coast of Carriacou, but this was not accepted by the victim’s families, and thereafter many theories, some outlandishly farfetched, started to emerge to explain the ship’s whereabouts.

Steele said these theories were carefully examined during her investigation. She indicated there was a faction of the population who believed that rogue waves may have been the cause, but climatic conditions at the time do not lend weight to that theory.

“Why it couldn’t have been a rogue wave, because of the climatic conditions at the time were not there and also when a boat is swamped you find debris and people are able to swim. The thing about the Island Queen passengers, there were at least 5 very strong swimmers on it, so if a rogue wave had taken the boat they would have been able to swim,” she said.

The second theory suggested that the vessel did not have any ballast and overturned, but that also was disproven.

Another theory suggested that Hitler was in a submarine that captured the boat, painted it over right there in the middle of the sea and sailed it down to a section of Argentina called Patagonia.

However, Steele said it was a third theory that was considered outlandishly farfetched but she understood why families clung on to that theory. “This was a mechanism among certain parents to make them feel that their children were still alive somewhere in the world. That theory didn’t really hold too much water, then they said that a German submarine had sunk it. Now there were no German submarines, there was one left but it wasn’t in the area.”

Steele believes the theory holding the most weight suggests that the turmoil of World War II may have played a major part in its disappearance. “We have no proof at all of what could have happened to the Island Queen, there are only guesses. It had a German engine, it was possible that somebody was tracking the sound of it and it is possible that they thought it was a supply ship for the one remaining submarine but something let go some powerful bombs on that ship because not a matchstick was found.”

As to the remnnants of the ship wreckage, Steele said this will require some underwater exploration.

Part of the book sought to document the lives of those lost and the reaction from close relatives and friends, but also draws the connection between what was transpiring at the time during the war and the contribution made by the military servicemen and women of the region towards the victory of Britain and its allies against German forces.

“Any documents to do with the Island Queen, they don’t exist and if they did exist, they don’t exist anymore. So, it is not so much these days as to what happened to the Island Queen, it’s a matter of remembering and that regardless of whether it was a German submarine sunk it or a friendly fire that sunk it, that it was a price that Grenada paid for being a colony of Britain during World War II.”

Steele is advocating for a memorial monument to be placed at the site on the Carenage where the vessel departed and that the day be nationally recognised as a day of remembrance of those lives lost.

“I am particularly keen that we remember the captain of the Island Queen, who was a Syrian–Lebanese called Chicra Salhab and he was much beloved… I would like to see for everybody, since they have no tombstone, a monument, maybe from the point at which they left, which is just outside of the fire station, with everybody’s name on it and I would like to see us remember. August is not just for celebrating Emancipation and carnival but it is definitely for remembering this tragedy that took place over the Emancipation weekend.”

A 2015 article published on Ocean71 magazine briefly mentioned the disappearance of the Island Queen and according to the article, a volcanologist from the University of West Indies (UWI) Trinidad & Tobago, Jan Lindsay stated that Kick ’em Jenny may be responsible since at the time the submarine volcano seemed to have been letting out large amounts of gas, creating clouds of bubbles above which, according to Lindsay, caused the drop in the water’s density above the crater, reducing the buoyancy of any object floating above.

NOW Grenada is not responsible for the opinions, statements or media content presented by contributors. In case of abuse, click here to report.
Tags: beverley steelechicra salhabcurlan campbellgrenada in wartimeisland queenkick 'em jennyprovidence markst vincent and the grenadinesworld war
Next Post