Grenada signs onto UNCAT; cannot extradite persons to be tortured

Grenada signs onto UNCAT; cannot extradite persons to be tortured

Thirty-two years after it went into force, Grenada on 26 September 2019 signed and acceded to the International Convention against Torture and Other Cruel, Inhuman or Degrading Treatment or Punishment, and will now have to put structures in place to ensure among other things that any person to be extradited will not be subjected to torture.

Article 3 of the convention, better known as UNCAT, states, “No State Party shall expel, return or extradite a person to another State where there are substantial grounds for believing that he would be in danger of being subjected to torture.” The clause also explains that for the purpose of determining whether there are such grounds, the competent authorities shall take into account all relevant considerations including, where applicable, the existence in the state concerned of a consistent pattern of gross, flagrant or mass violations of human rights.

Grenada has signed an extradition treaty with several states including China, the USA, the UK and Caricom. The convention says that each state which signs the document “shall ensure that all acts of torture are offences under its criminal law.”

“Each State Party shall make these offences punishable by appropriate penalties which take into account their grave nature,” the convention recommends.

By signing on the convention, Grenada shall take such measures as may be necessary to establish its jurisdiction when offences of torture are committed in any territory under its jurisdiction or onboard a ship or aircraft registered in that state.

Grenada will now have to train and educate law enforcement personnel, civilian or military personnel, medical personnel, public officials and other persons involved in the custody, interrogation or treatment of any individual subjected to any form of arrest, detention, or imprisonment regarding the prohibition against torture.

The island must keep interrogation rules, instructions, methods, and practices under systematic review regarding individuals who are under custody or physical control in any territory under their jurisdiction, in order to prevent all acts of torture.

Minister David also signed the Escazú Agreement and the Treaty on the Prohibition of Nuclear Weapons.

NOW Grenada is not responsible for the opinions, statements or media content presented by contributors. In case of abuse, click here to report.
Tags: escazú agreementinternational convention against torturelinda strakerpeter davidtreaty on the prohibition of nuclear weaponsuncatunited nations general assembly
Next Post 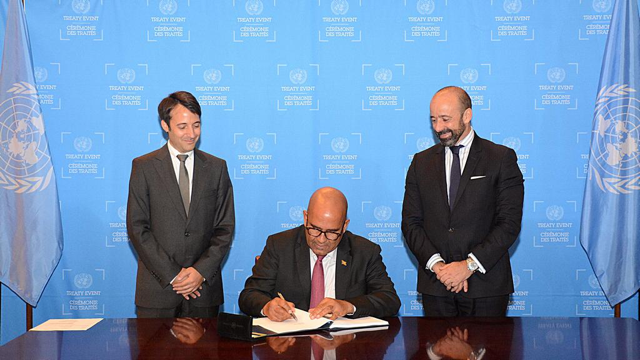