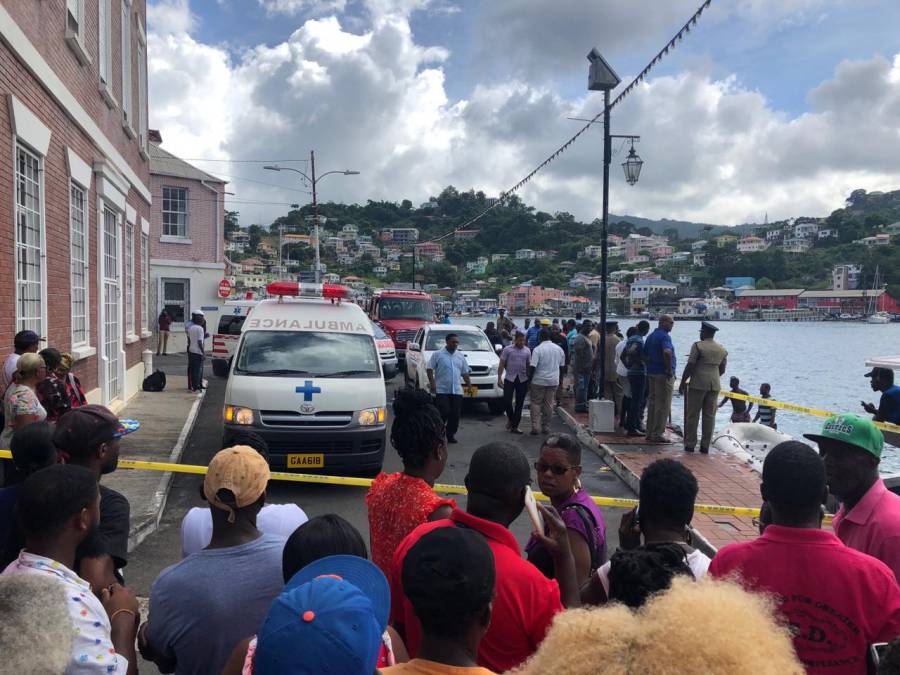 Ambulance and fire service on scene at Carenage where a bus plunged into the sea.
Share

A female senior citizen from the parish of St John lost her life in the Carenage road accident on Friday morning. Police have confirmed 65-year-old Altrice DeCoteau from the community of White Gate in St John, was the only fatality. DeCoteau is a well-known market vendor.

Besides a 9-year-old student who is presently warded at the Intensive Care Unit (ICU), all other persons including the baby who was the first to be rescued were discharged by Friday evening.

In video footage, the white passenger bus registration HP 148 is seen exiting Young Street onto the Carenage road, jumping the sidewalk and plunging into the sea close to the Hubbard’s Appliance Department.

“The driver lost control of the bus,” said Traffic Investigator Ryan Smith, in a news briefing at the incident scene.

Another video has appeared on social media showing what appears to be the brake of the bus which plies the #2 route, which travels between St George’s and the communities of Springs, Woburn, Woodlands and areas in proximity.

“At the time of today’s incident, the passenger bus was travelling along Young Street, St George’s, en route to Woburn from the bus terminus,” said a release from the Police.

The main rescue team comprised three civilian divers who are fishermen and one police officer. The fishermen were on their boats within the vicinity and immediately sprang into action after realising the bus had flipped into the sea.

“The Royal Grenada Police Force has launched an investigation into the cause of this morning’s (Friday, 20 September 2019) incident involving a passenger bus that veered off the road and sidewalk, and into the water at The Carenage, St George’s. The emergency call was received about 9:20 am,” said a police news release.

Acting Commissioner of Police Edvin Martin has commended members of the public who responded immediately, diving into the water to assist in the rescue of all persons who were on board. The RGPF has expressed its condolences to the family of the victim of the incident and wishes all others a speedy recovery.

The bus was removed from the water on Friday afternoon. The release from the police said that the bus remains in possession of the police, and the driver is currently in police custody assisting with the investigation into the cause of the accident.

The release said persons who were on the bus can collect their belongings at the Traffic Department Headquarters, Carenage, St George’s.