NDC Heartbeat: Is the MNIB inquiry a sham?

NDC Heartbeat: Is the MNIB inquiry a sham?

This story was posted 3 years ago
in Business, OPINION/COMMENTARY, Politics
5 min. read

In January 2018, a newly built extension to the MNIB’s offices at River Road, comprising a sizable section of the administrative office went up in flames. Around the same time, allegations of serious corruption in the MNIB surfaced.

The allegations of corruption at the MNIB included that a very senior manager purchased an MNIB vehicle valued over $100,000 for less than $30,000. There were also claims of corrupt practices in relation to the purchase of commodities for the MNIB from a company in Miami. Certain of the MNIB’s senior personnel were alleged to be associated with this Miami entity.

Prime Minister Mitchell, who is also responsible for the MNIB, publicly stated that he was shocked by the extent of the wrongdoing that apparently occurred between 2013 and 2018. In so doing, he exposed his own failure as the minister responsible, with wide and far-reaching duties and powers.

As a result of the public outcry following the exposure, Ruel Edwards, MNIB’s Chief Executive Officer was transferred to a high paying assignment at the Ministry of Finance, under the same Keith Mitchell, an apparent reward for mismanagement. A few months later Edwards was fired from that position because of more public outrage.

Under mounting pressure, the Prime Minister told the nation that an Inquiry will be launched to look into the operations of the MNIB.

The political affiliation and loyalty to Keith Mitchell of some members of the Integrity Commission and their immediate family is a matter of public record. No amount of explaining and deflection will convince the public at large that Anande Trotman-Joseph, who initially joined the commission as the NNP nominee and is the wife of Dr Lawrence Joseph and Rupert Agostini, a long-time member of the executive of the NNP, can be completely impartial in any inquiry in which Mitchell as the line Minister is up for serious investigation and scrutiny. Added to that, the newest member of the commission, Jasmine Redhead, appeared on the platform of the NNP during the last elections. The concerns raised here are not personal, but the fact is, public confidence in any inquiry carried out by this commission, some members of which are so closely connected with those under investigation, is bound to be very low. It is quite reasonable for the public to view them as having a conflict of interest and therefore not suitable to conduct this inquiry.

The Integrity in Public Life law itself defines conflict of interest as: “a situation in which a person in public life has a private interest which is such as to influence, or appear to influence, the impartial and objective performance of his or her duties.”

The terms of reference for the inquiry show that it will cover the period 2012-2018. In a 15 August 2018 press statement published by the Government of Grenada, the period under investigation was said to be five years, from 2013 to 2018. In fact, the Prime Minister expressed dissatisfaction with certain aspects of the MNIB’s management “over the last 5 years.” He said there was no problem before.

The question now is why has the Integrity Commission included the year 2012 in the period under investigation? Is this a red herring to give the public the impression that there was corruption in MNIB before 2013? Is this a sign of those loyal to Mitchell within the commission already setting up a scenario for him to spread the blame around for his abject failure as the Minister responsible for the MNIB? Are they helping Mitchell to get ready to say “all ah we at fault”? He already suggested that he is not prepared to take all the blame. Will the commission disclose any failures of the Prime Minister that it discovers?

Then there is the commission’s declaration that the inquiry will be held “in-camera or closed-door sessions.” That is, in secret, closed from the public. In a press conference held by the commission last year at the PWU building, Chairman Trotman-Joseph urged the media and the public to fact check before speaking on the issue. Madam Chairman, how can the public fact check a secret? The NDC calls on the commission to tell the public why an inquiry into corruption and mismanagement of a public asset should be held in secret and the findings remain hidden from the public, to be shared only with the persons responsible for the MNIB, that is, those who are under investigation?

The commission’s statement also says that the inquiry will “involve the full commission”. Rupert Agostini is a member of the commission and he was the auditor for the MNIB during the period under investigation. This is a clear conflict of interest and Chairman Trotman-Joseph acknowledged this conflict in the press conference mentioned above. She assured the public that Agostini had already recused himself. The commission, therefore, needs to quickly clarify these two conflicting statements.

The NDC is ever conscious of the hardship Grenadians face in terms of lack of adequate healthcare, our dilapidated schools and other public facilities and the need for strengthening of the social safety net programmes. Therefore, we will object to any more wastage of public funds. Some of the terms of reference of the commission of inquiry seem rather superfluous. For instance, sections 8, 13, 14, and 17 of the MNIB law say clearly what the roles and responsibilities of the board and management are. Why then does the commission need to expend resources to determine this very question?

The terms of reference seem to be unduly long-winded. The NDC urges the government not to waste taxpayers’ money on a lengthy investigation in which the public will lose interest. Focus on the real issue of mismanagement and corruption in the MNIB under the watch of Keith Mitchell and his hand-picked CEO. Don’t use our scarce resources to help Mitchell clear his name.

The MNIB was set up to find markets for local produce as a means of helping small farmers. Today some farmers refuse to sell their produce to MNIB because they fetch better prices marketing and selling on their own. It will be good to uncover why farmers are not being paid or are paid late, and why some complained of receiving bounced cheques for their produce. It points to serious financial mismanagement and the commission’s findings in this regard must not be hidden from the people. This is why the NDC insists that not only should the hearings be public but the findings must also be published.

NOW Grenada is not responsible for the opinions, statements or media content presented by contributors. In case of abuse, click here to report.
Tags: integrity commissionintegrity in public lifemnibndcruel edwards
Next Post 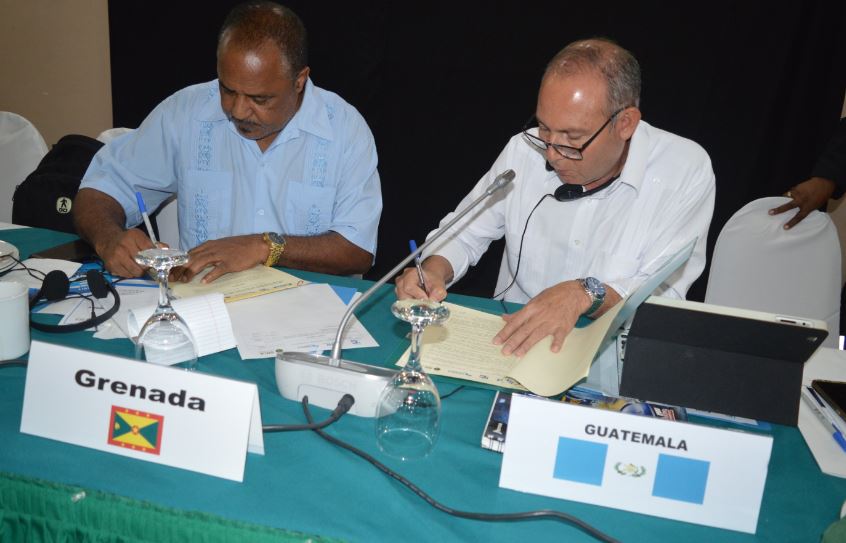