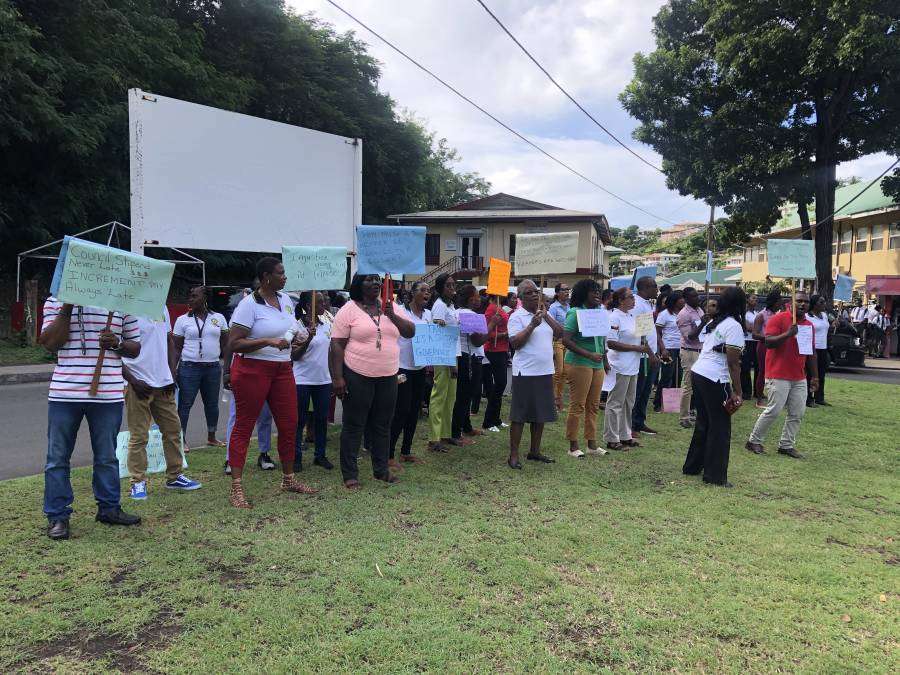 This story was posted 3 years ago
in Business, Education, General News
3 min. read

Protestors apart from the Public Workers Union-led protest at the TA Marryshow College (TAMCC) said they have the greater interest of the college and students at heart, however, this action is deemed necessary after years of waiting.

Adunni Johnson is among the 243 permanent workers at TAMCC who are stuck between a rock and hard place. They are confronted with a difficult situation that has forced them to disrupt the operations of the college in the ongoing protest demanding the payment of increments of over $6 million.

Johnson who serves as President of the Lecturers Association at TAMCC said the staff of the college who are protesting are also cognisant of the fact that students are being negatively affected in the process and that is being taken into consideration. “The reason we would not have been out before being that as someone in the teaching and learning profession, it is difficult, you are between a rock and a hard place, but at some point, you need to stand up for yourself because at one point you want to stand up for yourself but at another point in time you are concerned about the students.”

Without divulging information on their next move, Johnson said they have devised a number of strategies that will seek to force the hands of the government but will also ultimately affect the college day to day operations. “We hope that this thing ends as soon as possible because we have the greater interest of the college and the students. We have long term strategies that we have been planning so we are here until we get a solution that is satisfactory. So, we have some long-term plans in place that will affect the operations of the college and we have some short-term plans, but we hope it does not reach to that.”

Public Relations Officer for the Public Workers Union (PWU), Daisy Hazzard, is very disappointed in the pronouncement made by Minister for Tertiary Education, Skill Development & Education Outreach, Pamela Moses, at a recent post-cabinet briefing where she stated that the present impasse is a matter between the affected workers and the college council and that government is not involved.

In response, Hazzard said that statement left out some important facts and is just an attempt of government to wash their hands of the issue that is directly under their jurisdiction. “It is wrong of the government to attempt to wash their hands of the matter or to play a hands-off game and say it is not our responsibility. Yes, it is a government responsibility. TAMCC falls directly under the Ministry of Education; the Minister of Education appoints the council.”

The PWU is demanding payment of increments for the period 2014 to 2018 totalling EC$6.1 million from when Grenada entered into a 3-year Homegrown Structural Adjustment Programme which forced various public sector unions to accept a freeze on increments.