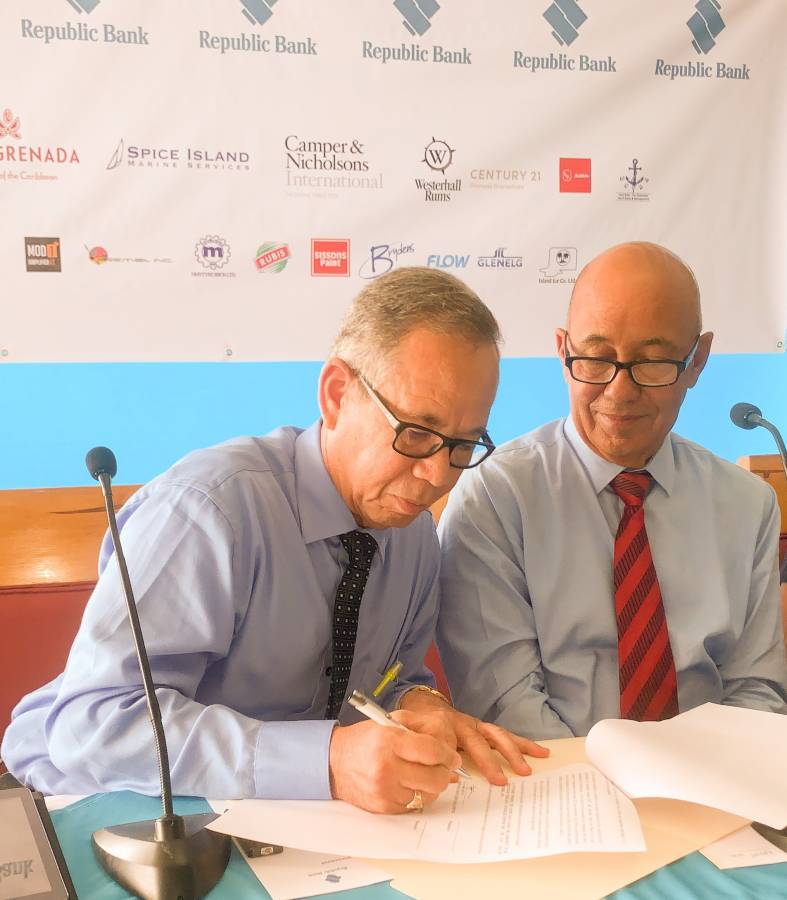 This story was posted 3 years ago
in PRESS RELEASE, Watersports
2 min. read

The 2020 Republic Bank Spice Island Billfish Tournament (RBSIBT) was officially launched at the Grenada Yacht Club, signalling the start of the 51st Grand Slam, to be held 26-30 January 2020.

Managing Director of Republic Bank, Keith Johnson and Chairperson of the tournament committee, Richard McIntyre signed the agreement in the presence of committee members, other supporting sponsors and the media, signifying the official commencement of Republic Bank’s title sponsorship. Republic Bank has, over the past six years, partnered with the Spice Island Billfish Tournament at the Blue Marlin or Tier 2 sponsorship level.

Commenting on this elevated sponsorship tier, Johnson remarked, “I have had the privilege to interact with the tournament organisers since 2014, and it is an honour to partner with this committed group of volunteers who have ably and admirably hosted this tournament for half a century.”

In his address, an elated Mc Intyre welcomed Republic Bank as main sponsor, commenting, “I would like to personally thank Mr Johnson and his team at Republic Bank for so willingly stepping in as title sponsor of the 2020 tournament.”

The Spice Island Billfish Tournament Committee over the years has shown consistent growth and development, and continues to play an important role in the stimulation of our local economy. A recent economic impact assessment estimates an injection of approximately $2 million annually, to the local economy.

During the launch, committee members paused to pay tribute to Bob Evans who recently passed, for the pivotal role he played in the development of the tournament over the years. Evans was a stalwart in the recent expansion project of the birthing facilities at the Grenada Yacht Club, the home of the tournament.

As Republic Bank celebrates 40 Years of Excellence in Grenada, the launch of the 51st Republic Bank Spice Island Billfish Tournament heralds a new thrust for both the Bank and the tournament organisers, to ensure sustainability of this time-tested traditional sporting event.

Having just expanded its regional presence with the acquisition of Scotiabank operations in seven Caribbean territories, including Grenada, Republic Bank is particularly elated to be the main sponsor of this event which also promotes regional collaboration and integration, and supports ongoing development within our region. The bank looks forward to working with the SIBT Committee and fellow supporting partners to forge greater ties, and to welcoming all participants to the 2020 Republic Bank Spice Island Billfish Tournament.

NOW Grenada is not responsible for the opinions, statements or media content presented by contributors. In case of abuse, click here to report.
Tags: keith Johnsonrepublic bankRichard McIntyrespice island billfish tournament
Next Post