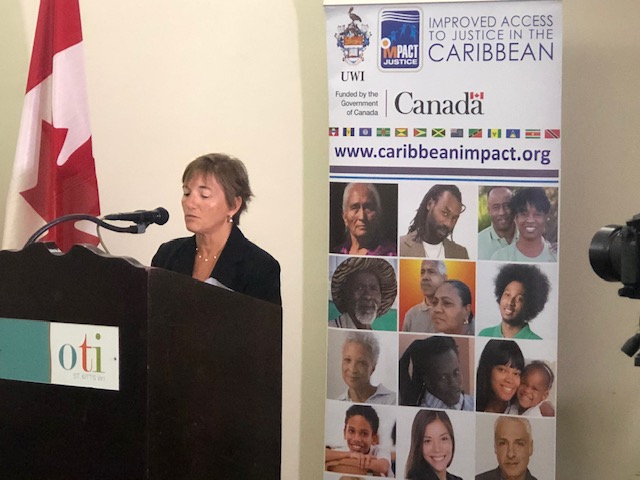 This story was posted 2 years ago
in General News, Law
3 min. read

Marie Legault, High Commissioner of Canada to Barbados and the OECS
Share

Marie Legault, High Commissioner of Canada to Barbados and the OECS, wants Grenada and other regional countries to look at the various model legislation drafted through the Improved Access to Justice in the Caribbean and modify them for their own needs.

“These bills have been drafted, and as you know drafting bills takes a lot of time, and having drafted over the last few years by the Impact, it is really up to you to use those bills,” Legault told participants attending a conference on The Constitutions and Model Legislative Initiatives in the OECS which opened in St Kitts on Thursday, 5 December 2019.

“My plea is really is for you to look at those bills and see how it can be adapted for your own needs to improve the access to justice,” she said while pointing out some of the benefits of the nine legislations. Some of the bills are economic in nature like the business model and trademark bills.

Referring to the model legislation which can result in establishing a sexual offences registry for the region, the High Commissioner said that it is key to impacting the lives of women and girls in the regional. “In particular so where there are high levels of sexual violence,” she said. Other bills will focus on the legal profession, mediation and arbitration.

“I appeal to you to look at those bills, to make sure that you use them. For you members of the media that you talk about them. Also use those 43 new drafters who are now available to you in this region, because this is all about justice access to all our citizens to make the world a better place,” she said during the opening ceremony which is taking place at the Ocean Terrance Inn.

The purpose of the conference organised by the IMPACT Justice Project with funding from Canada is to inform legislators, bar associations, interest groups and citizens of the OECS through the press, of the objects and purposes of the eight pieces of legislation to be discussed.

Profession Velma Newton, Regional Project Director of IMPACT Justice, said that every bill completed has been sent to individual Attorneys General and the Caricom Secretariat to be considered by the Legal Affairs Committee. “However, so far the only bill approved by the LAC over a five-and-a-half-year period is the IMPACT Justice Model community Mediation Bill,” she said, explaining that two years ago the Sexual Harassment Bill was circulated to Caricom member states for consideration.

IMPACT Justice is an eight-year regional civil society justice sector reform project funded by the Government of Canada. It is being implemented from within the Caribbean Law Institute Centre, Faculty of Law, The University of the West Indies (UWI), Cave Hill Campus since 2014 and will conclude in 2022.

The project is working towards addressing deficiencies in the justice sector in Caricom and promoting economic and social development in the region. The ultimate outcome is enhanced access to justice to the regional participating countries of Antigua and Barbuda, Barbados, Belize, The Commonwealth of Dominica, Grenada, Guyana, Jamaica, Montserrat, St Kitts and Nevis, St Lucia, St Vincent and the Grenadines, Suriname and Trinidad and Tobago.