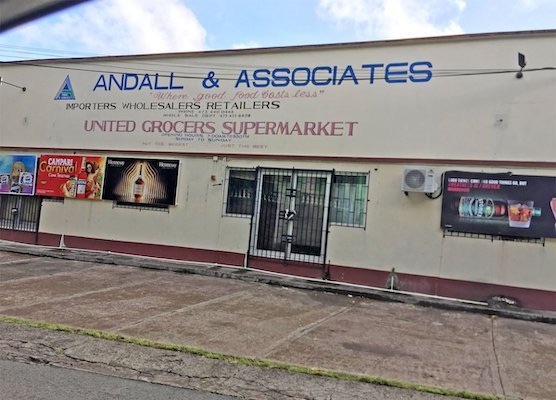 Michael Stephen, Comptroller of Inland Revenue Department, said on Tuesday that when the owner of Andall’s Supermarket decided to reopen the retail chain on 23 December 2019, the outstanding tax matter was not resolved. A deadline of 31 January 2020 was given to resolve the matter.

The supermarket closed its doors on 8 December 2019 without notification to the public, but in a memo to staff dated 8 December 2019, the management informed that the action to close was based on recent actions taken by the government against the company.

“The government has made it impossible for the company to operate as a business entity. The company has therefore decided to close its operations with immediate effect,” said the memo which was forwarded to members of the media.

15 days later, the management of the supermarket chain reopened its doors on Monday, 23 December 2019, less than 48 hours after the owner, Peter Andall, held a news conference where he explained to the media that the closure was due to a breakdown in talks about outstanding taxes to the state.

In providing an update on the matter, Stephen said that the situation is not settled as claimed by the owner in an interview on the day the business reopened. “In fact, the discussions are still ongoing, the matter has not been settled. The individual could have reopened his business on December 23, we could have received a letter from him on that day saying he has some proposal in order to settle his taxes in a very period of time.”

“I responded to him accordingly and giving him a timeframe in order to do so, that timeframe has not expired as yet. It’s a long outstanding matter. I wish to settle it so that government can receive their due taxes and he can operate comfortably,” said Stephen.

He explained that government had no intention of shutting down the supermarket, but the law provides for action to be taken against noncompliant taxpayers which could have provided difficulties for the company. “There are measures government could have taken that could have caused the individual to be in a challenge so he would have had to take that course of action. It’s not something that we wanted to happen because we understand that there are persons who are working and have personal obligations,” he said.

Stephen said the taxes due and owing have accumulated over the years, and once it was drawn to the attention of government that the company’s building in the heart of the city was sold, his department approached the owner with a view to settling or significantly reducing the outstanding taxes.

The tax administration law does not provide for the State through the Minister of Finance to waive taxes due, but a request may be made to reduce penalties and interest. A period of general amnesty can also be declared by the cabinet of ministers’ decision on penalties for a certain period.

As of 31 December 2018, the company’s indebtedness according to public records at the Corporate Affairs and Intellectual Property Office (CAIPO) in respect of all mortgages and charges of the kind which are required to be registered with the registrar under the Companies Act, was EC$6,783,047.66.

NOW Grenada is not responsible for the opinions, statements or media content presented by contributors. In case of abuse, click here to report.
Tags: inland revenuelinda strakermichael stephenpeter andallsupermarkettaxvalue added taxvat
Next Post