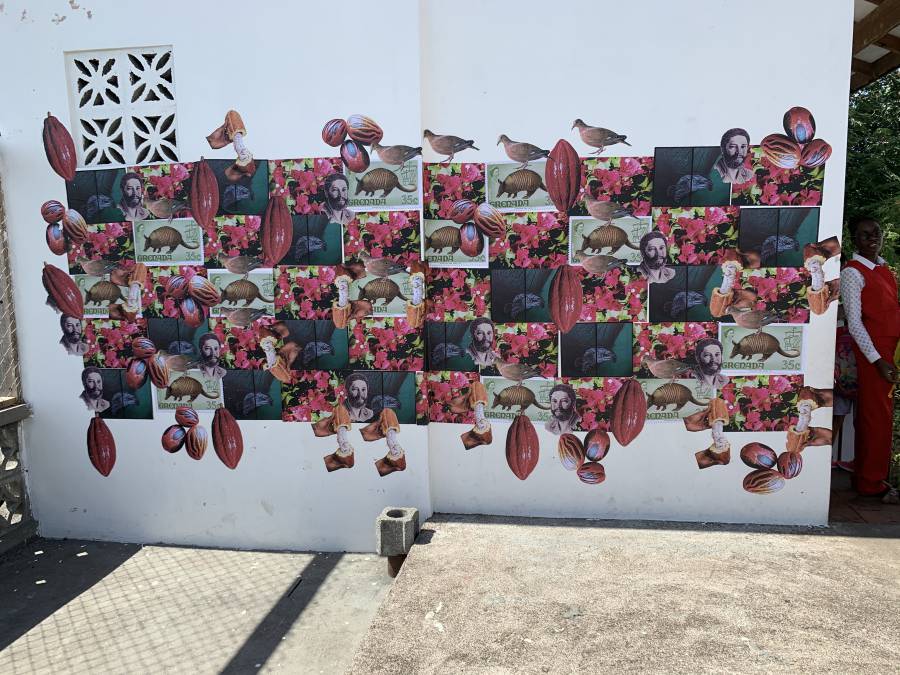 Early on Monday if you were passing on Upper Lucas Street, you may have seen the children of Berean Christian Academy (BCA) clustered around one of the newly painted blank walls on the school compound.

In what seemed like no time, a colourful mural appeared highlighting some of the visual icons of Grenada. Local Artist Susan Mains worked with the children to activate this blank space into a message of love for Grenada.

The work of Richard Williams of Trinidad, now resident in Germany is comprised of what he calls a “paste-up”. He meticulously cuts out printed images, then collages them together in a vast expanse to convey a message. Repetition of patterns is part of the charm of the work, and it is often that you are admiring the beauty when suddenly you are hit by the strong message.  His work follows ecological themes — saving the environment, particularly turtles, is high on his agenda.

Williams became aware of the rise in art activity and appreciation in Grenada through Grenada’s first participation at the Biennale di Venezia, Itay, in 2015. Since then he has been in constant touch with the Grenada artists, and participated in the Grenada Contemporary in 2017.  He freely offered to send one of his paste-ups here, and now it is installed.

The work is ephemeral — since it is outside, it will only last as long as the wind and weather permit. Then another message in art will replace it.

The children’s participation in installing the paste-up was delightful. They were excited to be a part of a big project, and they were intrigued by the visual symbols. Some young ones didn’t know what a tattoo was, (armadillo). Some were surprised by the Grenada dove, but all recognized the cocoa pods instantly.

During the Independence period, the teachers of each class at BCA will spend time with the children in front of the mural talking about the importance of each and every icon. It is an exciting way to inculcate the importance of local culture and to reinforce pride in country. Parents are free to take pictures of their children in front of the mural, and post on social media to extend the power of its reach.

In recent times #GrenadaArtIsland has been trending. Visits from artists from Trinidad and Barbados, and coming in February from Italy seem to indicate that something special is happening here that others want to be a part of.