This story was posted 7 months ago
in Crime
Reading Time: 2min read 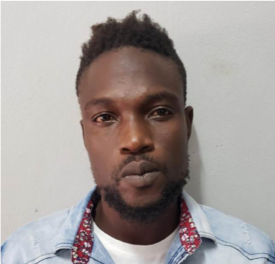 Ronald Thomas is the only suspect among 3 men, not granted bail in connection with the seizure of 698 pounds of cannabis valued at $1,578,528.00 in December of last year.

Rol Mc Queen 31, of La Fortune, St Patrick and 43-year-old mechanic, Finbar Phillip, of Soubise, St Andrew, were bailed in the sum of $75,000 after being charged with Conspiracy to Traffic in a Controlled Drug. Ronald Thomas, 35, of Post Royal, St Andrew will be held at Richmond Hill Prison.

The men appeared before Magistrate Nevlyn John at the Grenville Magistrate’s Court on Tuesday, and were not allowed to plea, since the matter is an indictable offence. They are represented by Criminal Defence Attorney Arley Gill, who unfortunately was not able to attain bail for Thomas. Thomas was recently extradited to Grenada from neighbouring St Vincent by law enforcement officers.

The police prosecution expressed the view that Thomas, who also has a Dangerous Harm matter pending before the court, was on the run to evade law enforcement. This claim was refuted by his attorney, who indicated that Thomas, who has strong family ties to the neighbouring country, was only released from prison in St Vincent last July after serving a 2-year sentence.

However, in relation to Thomas specifically, Magistrate Nevlyn John pointed out that the court should have been informed since there were specific bail conditions attached to the Dangerous Harm offence pending before her.

With regard to Phillip and McQueen, although the prosecution did not object to bail, they asked that special conditions be attached. Both men were ordered to surrender all their travel documents, to seek permission to leave the state and to report to the Grenville Police Station between 9 am and 4 pm once per week.

The 3 men are expected to reappear in court on 5 March for mention; while Thomas is expected to also return to the court on 13 March to answer charges for the Dangerous Harm offence.