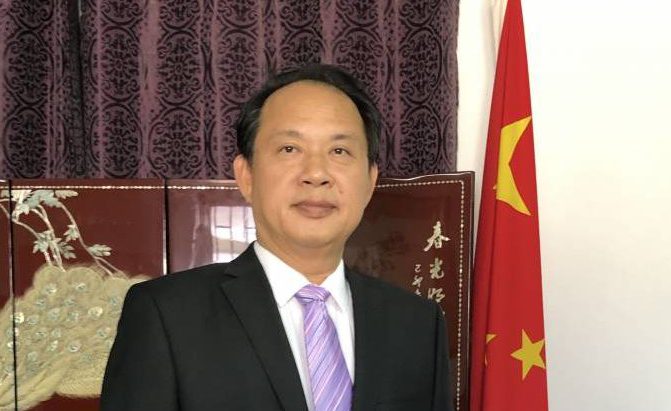 This story was posted 2 years ago
in Health, OPINION/COMMENTARY
4 min. read

by HE Dr Zhao Yongchen, Chinese Ambassador to Grenada

Although the Novel Coronavirus Pneumonia (NCP) continues to spread, the international community is firmly standing with China in the fight against the epidemic.

Many country leaders and heads of international organisations have expressed their support and sympathy for China, highly commended China’s firm and strong actions, and shown confidence in the ability of the Chinese government to prevail over the epidemic. In the past few days, the Chinese Embassy in Grenada has received a lot of messages from many Grenadian friends which encouraged us a lot. We are very much grateful. I would like to share my viewpoints on some common concerns of Grenadian friends.

Will China win the battle against the NCP? My answer is YES!

Early this month, the Central Leading Group on Responding to the NCP Outbreak was established to comprehensively carry out the prevention and control work. China has established an all-around and multi-level epidemic prevention and control system, focusing on Wuhan and Hubei Province, and covering central and local levels, mobilising the whole nation into the battle against the epidemic. The work of all aspects is in an open, transparent, scientific and orderly manner. Obviously, the Chinese government’s firm measures to control the spread of epidemic are effective. WHO Director-General, Tedros Adhanom Ghebreyesus, has repeatedly applauded China’s forceful measures. He said, “China’s speed of detecting the outbreak, isolating the virus, sequencing the genome and sharing with WHO and the world is very impressive and beyond words. So is China’s commitment to transparency and supporting other countries”. Tedros praised the Chinese government for its swift detection which has significantly slowed the spread to other countries. So, it is safe to stay in China, we have sufficient capacity and resources to control the epidemic in an early date. As the Director-General put it, “The only way we will defeat this outbreak is for all countries to work together in a spirit of solidarity and cooperation, this is the time for facts, not fear, this is the time for science, not rumours. This is the time for solidarity, not stigma.”

How are Grenadian students in Wuhan?

As far as I know, more than a dozen Grenadian students are studying in Wuhan, their safety has attracted high attention of the Grenadian people. I can be very responsible to say, they are healthy and safe in China. We have been in close touch with the Grenadian government and the Grenadian Embassy in China to ensure their lives and address their concerns and needs in a timely manner. We believe that it is better and safer for them to stay in China.

A few days ago, a chartered airplane from china landed in Grenada. Recently a few Grenadians returned from China. Will these pose any new challenge to the prevention of NCP epidemic?

The excessive fear of epidemic is unnecessary. As a major responsible country, China has been taking effective measures to fight against the epidemic while preventing the spread. Chinese citizens with suspected symptoms in China are not allowed to board the flight or ship. Chinese border pre-checks health status of anyone going abroad. To my knowledge, the private jet took off from Beijing on 26 January and arrived in Grenada on 28 and left on 30. But at that time Beijing was minimally affected by the epidemic. With a responsible attitude, Grenadian health department attaches great importance to people’s safety. As soon as the plane landed, medical staff were sent to check the health status of passengers on board the aircraft.

As to the Grenadians who came back from China, they did not live in Wuhan. China is a vast country with 9.6 million square kilometres, thanks to China’s efficient and effective control measures, conditions of different localities vary a lot. We understand the concerns of Grenada public, but there is no need to panic or overreact.

Frankly speaking, China and Grenada are thousands of miles apart. Compared with the neighbouring countries, the number of Chinese travelling here is quite limited. I hope the people of Grenada could calm down, not overreact, live and work with ease; everything would work out.

The Government of Grenada is very responsible to its people, by adopting forceful measures to ensure the efficient operation of health system and maintaining close communication and coordination with my embassy.

A friend in need is a friend indeed. Just as the Chinese people extended a helping hand when Grenada suffered hurricane disasters, the Grenadian government and people also render empathy and support to China’s fight against the epidemic. The epidemic is temporary but our friendship and cooperation last. I hope that after this special short period, more Chinese and Chinese enterprises will come to Grenada to invest, promote the economic and social development of Grenada. I also hope that Grenadian students could acquire achievements from studying in China and contribute to the development of Grenada in the future.