This story was posted 11 months ago
in Environment, Feature, Travel/Tourism
6 min. read 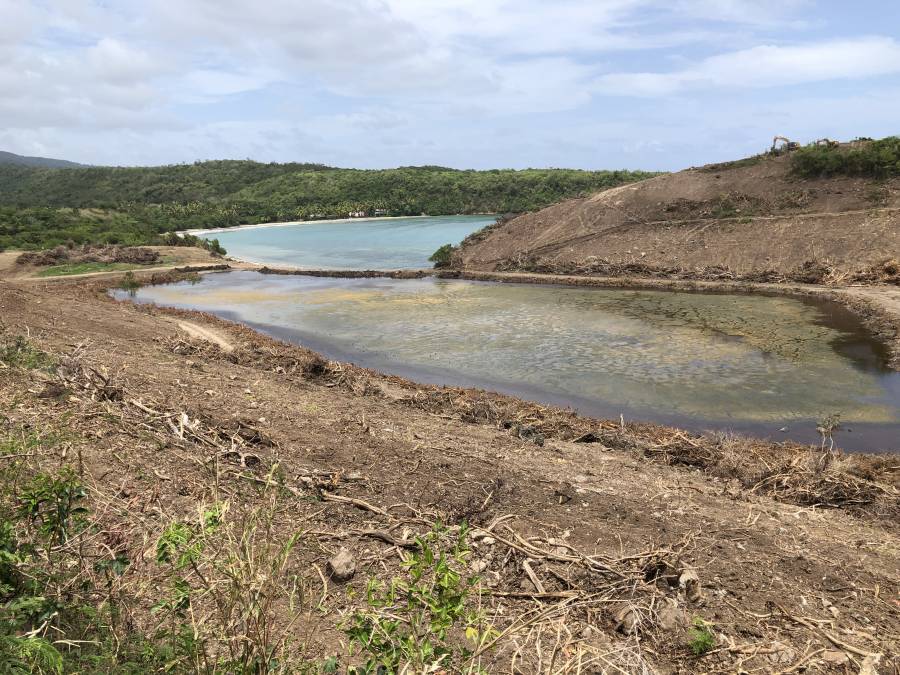 Once a haven for over 70 species of migratory birds, a striving mangrove population and a saltwater pond, bulldozers and other heavy machinery have reduced the area to a wasteland destined for the construction of Six Senses Hotels Resorts Spas.

Concerned wildlife conservationist and veterinarian Dr Kenrith Carter, questioning the motive of the developers, posted a video on social media highlighting the extent of deforestation of the mangroves. Concerned citizens also uploaded earlier pictures of the La Sagesse salt pond, comparing them with current images of the area.

For over 30 years since the construction of La Sagesse Nature Centre, there was no major development on the La Sagesse beach until recently when the government and project developers Range Developments, marked the groundbreaking ceremony. The first of two Six Senses Hotels Resorts Spas is slated to open in 2022, part of the latest luxury hospitality projects in the Caribbean by Range Developments, under the Citizenship by Investment programme.

The developers gave the assurance that over 500 jobs will be created during the lifespan of the project. However, with La Sagesse being the third most diverse birding site in Grenada, Dr Carter and other conservationists are of the view this will in no way compensate for the degradation of the environment.

Take for example the salt ponds which attract a large number of migratory birds that come south for the winter months and hosts many year-round resident bird species. Dr Carter identified some major species of birds including shorebirds, waterfowl, marsh birds, pigeons, doves, gulls, pelicans, mangrove and dry forest species that have made the salt ponds home.

He further explained the significant role the salt ponds and surrounding habitat plays. “This birding site is used by 46% (72/152) of all bird species documented here in Grenada. Salt ponds provide a range of different habitats with their varying levels of salinity. At different depths different water plants, algae and invertebrates exist providing food sources for smaller birds to feed on. The presence of fish supports larger birds like herons, egrets, terns, pelicans, rare kingfisher, and ospreys. The salt ponds are not only feeding grounds, they provide shelter and breeding grounds. They are not only vital to birds, but all wildlife and the mangroves provided coastal protection against natural disasters.”

The conservationist foresees major consequences that the removal of mangrove will have on wildlife species and the environment. “The removal of their habitat is disastrous for our migratory species who spend weeks flying thousands of miles across continents to their known shelter, feeding and resting place. On arrival, migratory species have lost 30-40% of their body weight and it is crucial that they are able to get adequate nutrition before they migrate again to breed. If they are unsuccessful in gaining enough mass, they will die on their journey.”

“The loss of the vegetation around the pond will alter its quality. With the entire pond now being exposed to the hot sun, the water quality will change, and silt from the cleared land will wash into the pond. This will likely cause a change in nutrient levels, resulting in unwanted algae blooms, reducing oxygen levels and killing off fish and invertebrates living in the pond,” Dr Carter said.

NOW Grenada understands that one salt pond will be an integral part of the overall architectural design of the resort, however, sources close to the project claim the developers intend on narrowing the salt pond by reducing its size.

Despite the announcement by Managing Director and Member of the Board of Range Developments, Mohammed Asaria, that all preconstruction studies, environmental assessment, and soil tests were completed prior to the start of construction, Dr Carter is still not convinced that those environmental concerns were taken into consideration. “Based on the complete destruction of the area, I do not believe an adequate, unbiased EIA (environmental impact assessment) was conducted to identify and evaluate the environmental consequences the development would have prior to the clearing of the landscape.”

He is also seeking answers from the Minister for Climate Resilience and the Environment, Simon Stiell, on whether they followed the necessary procedures before commencing construction. Under the Physical Planning and Development Control Act, 2002 it states: ‘The Authority must publish in the Gazette and in one newspaper in general circulation in Grenada a notice of the places where and times when the draft may be inspected and must give such other publicity of the draft and of the right to make representations. Any person may make oral or written representations. The Authority must consider and forward a report on them to the Minister. The Authority must make copies of an approved plan available for inspection at its offices and for sale to the public at a reasonable price. Such provisions also apply to any modification or alteration.

“I do not believe this has been done,” Dr Carter said.

Dr Carter, a current member of the Grenada Birding Club, has played a role in the data collection of bird listings that are shared with international organisations, such as the Caribbean Waterbird Census, and The Cornell Lab of Ornithology. He reminisced during his childhood utilising the area for recreation and expressed a sense of sadness for what is currently unfolding.

“Growing up as a child, I was always fascinated by birds. We usually went to La Sagesse to see the ducks. Everyone knew the salt pond would be full of different coloured ducks at certain times of the year. Bird watching takes you outdoors into nature and has been a growing hobby in Grenada amongst locals and visitors. It is fascinating to know you can take a 5-minute drive, with your pair of binoculars and bird ID book to see species that people will normally travel thousands of miles to observe. As an avid birder, I have done bird watch checklists in most of Europe, USA, Canada, and even central America; yet the highest number of species I have documented has been here in Grenada. La Sagesse Salt Pond is my top local site for observing and listing bird species,” Dr Carter said.

Mike Meranski, owner of La Sagesse Nature Centre, although not opposed to development coming to the parish of St David, believes that protecting biodiversity and ecosystems can go hand in hand with development. “Development is wonderful, we are excited about it but we are concerned about overdevelopment and the destruction of the ecosystem, so like everything else you have to find the balance. So we just hope that with this development takes place at La Sagesse that they balance the ecological and environmental needs together with the development of the tourism industry.”

Meranski hopes that project developers are aware of these environmental concerns and take steps to ensure that the problem is minimised. “We understand that Six Senses is very environmentally conscious and aware of these things, but ripping up that entire mangrove worries us. And the whole hillside now when the rainy season comes, where is all that mud going to go? It goes into that salt pond and that salt pond won’t have the capacity any longer to filter itself because the mangrove is gone,” he said.

Efforts to reach Minister Stiell for comment on the matter were unsuccessful. An email sent to Range Developments and as of the publication of this article, a generic response received stated that “someone will be in touch with NOW Grenada shortly to assist you further with your requirements.”

According to the United Nations Environment Programme (UNEP), mangroves are being destroyed around the world 3-5 times greater than the average rate of deforestation causing billions in environmental damages.