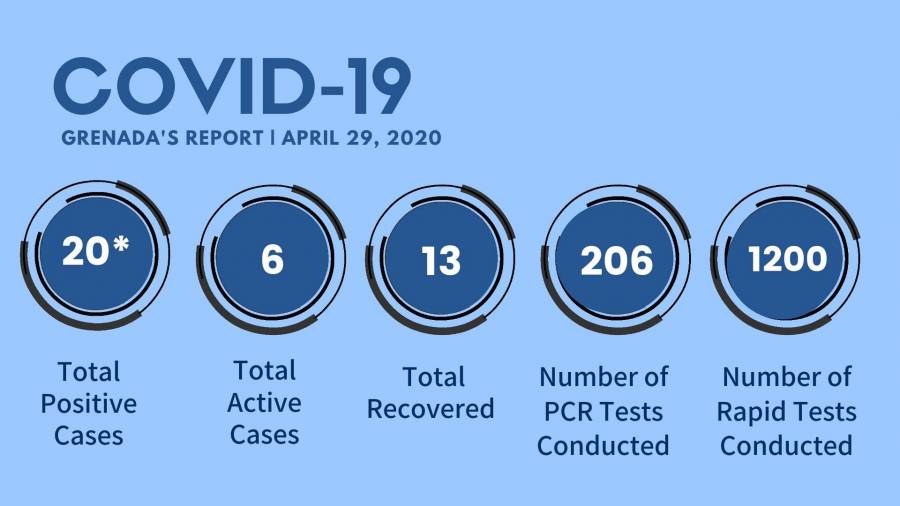 This story was posted 2 years ago
in Business, Health
2 min. read

Grenada’s active Covid-19 cases now stand at 6, because 13 of the 19 cases have been declared recovered.

Grenada has confirmed 20 cases in total, including one of the earlier positive patients who left the island without medical permission and flew back to the United Kingdom via an Air Canada flight.

Health Minister, Nickolas Steele, in providing an update to the Nation on Wednesday afternoon said that the new case brings to 5 the number of persons associated with a company which has since been asked to shut its doors. “The individual confirmed today is a 54-year-old female, who is the relative of one of the positive workplace cases reported previously. She is presently isolated and monitored, as are all other positive cases.”

The company is Caribbean Agro Industries, which is the island’s lone flour mill that also produces animal feed from wheat imported from the USA. The company is yet to issue a statement. The first case related to that company is the person only identified as case 15. Health authorities are yet to confirm how and where he contracted the coronavirus.

The health minister told citizens that while the ministry has been emphasising safety protocols at every turn, it is evident, from this particular company, that workplace safety was not followed rigidly enough, and that employees were in too close a proximity to each other. “Therefore, this particular company is now closed for the duration of our tracing. We apologise to the general public, especially to the direct stakeholders and beneficiaries, but our actions in asking that the company stay closed are necessary in ensuring public safety.”

Explaining that it is quite easy to transmit a virus in the workplace, especially in enclosed spaces, where staff are in close quarters, Steele said that it is against that knowledge, companies that are allowed to resume operations do so with a mandate to practice the health safety protocols.

“That is why we asked that companies that are allowed to open only do so under strict safety protocols, such as wearing of masks or face covering over the nose and mouth, and practicing physical distancing of at least 6 feet; along with proper hygiene measures such as disinfecting public areas,” he said, calling on everyone to stay vigilant, and not to drop their guard.

“You must take responsibility for your own personal hygiene as well, including frequent handwashing,” reminding the general public that the precautionary measures are most effective when combined. “So please wear your masks whenever you leave your homes; exercise proper hygiene, and practice physical distancing,” Steele instructed citizens.

NOW Grenada is not responsible for the opinions, statements or media content presented by contributors. In case of abuse, click here to report.
Tags: caribbean agro industriescoronaviruscovid-19hygienenickolas steele
Next Post

Deadlines extended to 30 April are due on 4 May