This story was posted 1 year ago
in Business, Health
3 min. read 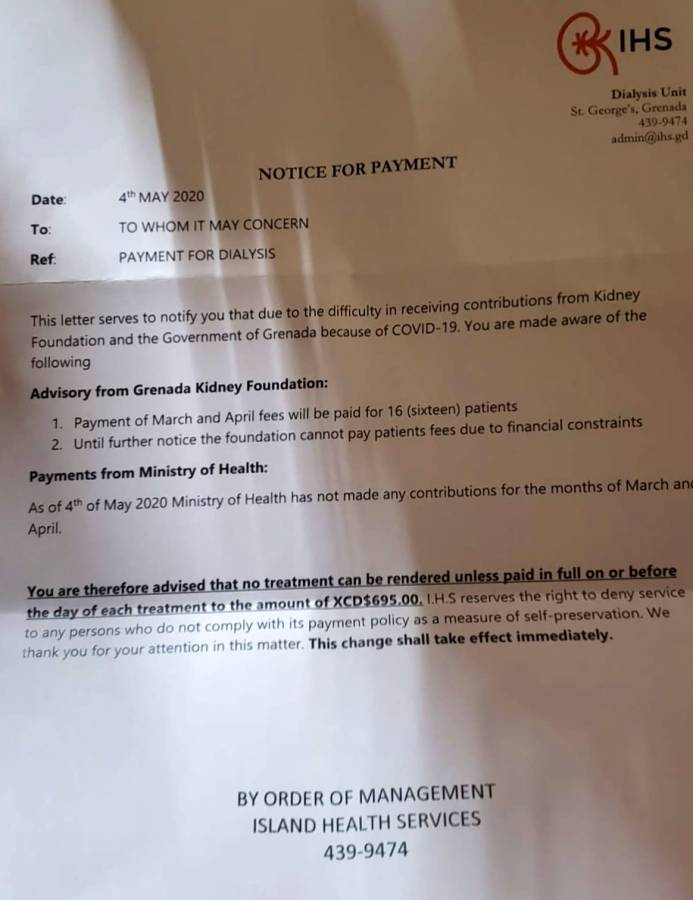 The lone clinic in Grenada which treats dialysis patients has informed that due to the failure of government through the Ministry of Health, to pay for services during the months of March and April 2020, and the Kidney Foundation’s inability to provide financial support, only those who can pay for the treatment will be provided with the service.

An unsigned letter was given to patients who received service on Monday, 4 May, entitled “Notice for Payment” on the company’s letterhead, that said each treatment will cost EC$695. “You are therefore advised that no treatment can be rendered unless paid in full on or before the day of treatment to the amount of XCD$695. IHS reserves the right to deny service to any person who does not comply with its payment policy as a measure of self-preservation. We thank you for your attention in this matter. This change shall take effect immediately.”

Marva Gilkes, President of the Grenada Patient Kidney Foundation, was surprised to learn of the letter, and admitted that the foundation has written to the management of the clinic explaining why payment will be delayed.

Almost one hour after learning about the letter, she sent a message saying that the matter should be resolved because the cheque expected from government was ready for collection. “Things are working out, payment will be made on Wednesday, 6 May,” she said. “I am collecting the government contributions today, so I will make the payments on Wednesday for the months of March and April.”

Health Minister, Nickolas Steele, was also unaware of the letter given to patients. He then explained that the onset of the Covid-19 pandemic has affected the implementation of many government projects including the setting up of the dialysis clinic which was spoken about during the month of January.

“We are going to do what is presently in the best interest of the patient, but things will be different soon,” he said, pointing out that the cheque for the foundation was ready for some time but was not collected by a representative.

Steele could not recall receiving any form of communications expressing concern for payment from the management of Island Health Services which is owned by Trevor Forrester, who is the son of opposition politician Terrence Forrester. “We recently assisted in the delivery of supplies for the clinic from Trinidad using the RSS aircraft and I cannot recall him saying anything to us about outstanding payment,” Steele said.

Grenada declared a state of emergency on 25 March and since then the country has not been functioning as normal, with limited days shopping and business, and without public transportation available.

In January 2020, Steele, during the weekly post-cabinet briefing announced that the General Hospital will be offering dialysis treatment to patients seeking renal replacement therapy as of mid-February at almost 50% less to what is currently charged by the private sector.

Dialysis is a treatment that filters and purifies the blood using a machine. This helps keep fluids and electrolytes in balance when the kidneys can’t do their job. In medicine, dialysis is the process of removing excess water, solutes, and toxins from the blood in people whose kidneys can no longer perform these functions naturally.