Human trafficking, sex work and Covid-19 in the Caribbean region

Human trafficking, sex work and Covid-19 in the Caribbean region 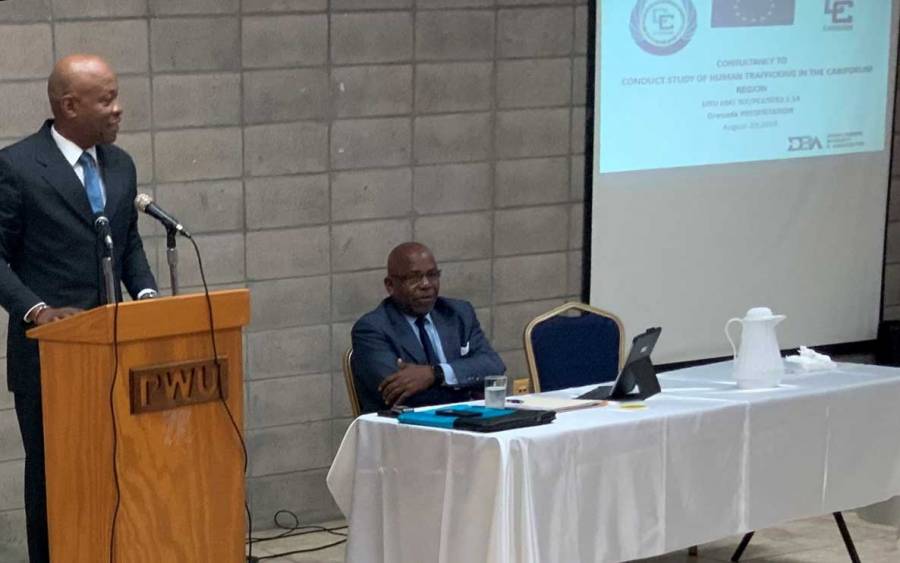 The issues are coming to the forefront within national, regional, and global conversations. Human trafficking and all the linkages with it, have been growing societal concerns in the region, even before the Covid-19 pandemic. How do we respond NOW?

During the pilot and stakeholder consultations held in Grenada, in August 2019, it was revealed that human trafficking which involves sexual exploitations, forced labour and domestic servitude is on the rise in the region. Consultations were coordinated by the Canadian firm, Dunn, Pierre, Barnett & Company Canada Ltd.

During these consultations, it was noted that the scope and nature of trafficking in persons within the region may have slight variations in terms of higher prevalence of internal vs cross-border trafficking and nationality of victims identified. However, what remains consistent is that the most prevalent form of human trafficking across the region involves the sexual exploitation and forced labour of primarily women and young girls.

Additionally, many countries experience internal as well as cross border trafficking. Most of the cross-border trafficking occurs intra-regionally within Cariforum and the broader Americas. Increasing migrant flows due to political instability in Venezuela and Haiti has resulted in an upsurge of vulnerable Venezuelan and Haitian nationals being trafficked in the region. Structural factors in addition to political instability, such as poverty and unemployment have also been determined as some of the root causes based on the profile of victims identified in the region.

Traffickers have preyed on these vulnerabilities, luring victims primarily through false job opportunities and the marketing of “HOPE”; using deceit to mislead them.

Another interesting conversation is the response to sex workers – especially during this Covid-19 experience. Will they be given considerations – stimulus packages etc, as other sectors of society? Obviously, they would have lost incomes!

According to Dr C Justine Pierre, Migration and Human Trafficking Consultant, and the lead researcher on the Cariforum/Caricom Human Trafficking research project, who said during a Panel Discussion on “Prostitution in the Caribbean in the times of Covid-19” that the region has the highest percentage of prostitutes (sex workers) per population in the world. He said, “the Caribbean also has one of the world’s largest brothels.” Furthermore, Dr Pierre cited that we have more than 30,000 prostitutes operating in over 83 brothels with 5 or more sex workers.

“We may not like what they do, however these women provide a very essential service to the region: Firstly to serve and comfort persons in the military, people who work in the mines and oil rigs, the sailors on boats, transportation workers such as truck drivers, and many of the tourists that frequent the Caribbean. The most interesting findings which was revealed, he said that there is a high local demand for sex and prostitution in most of the Cariforum and Caricom countries.

He also revealed that 37% of their customers are married men. The question is being asked, is sex considered an essential service now?

There are reports of some regional governments providing work permits to sex workers. They are provided with the opportunity to do business for specified times and are expected to return to their home country. Upon return to their homeland they can engage in educational, vocational and other capacity building and development programs or projects from the economic gains of the industry. This has turned out to be a positive experience for the workers whose livelihoods are being empowered through self-employment and community development.

That is the reality, the new normal. We all have a free will. People are people! remarked a Human Right and Sex Work advocate. Noting that “everyone is entitled to a temporary space on earth… Whether you earn $40,000 a week or $4; as priest or prostitute, you are not leaving earth with it…!”

According to statistics human trafficking and prostitution are major businesses in the region. There is a Caribbean Sex Work Coalition (CSWC) for which Grenada participates.

Adding, “Currently, we are partnering with the Organisation of Eastern Caribbean States (OECS) to work in other smaller islands such as Barbados St Kitts/Nevis and St Vincent,” stated Edwards. “In the countries that we work in, the countries have laws and policies that prohibit sex work and solicitation. For example, in Grenada, an individual can get up to 10 years in prison for sex work. Sex work is not regulated in the Caribbean. Sex workers work whenever and wherever.”

A recent article in the Jamaica-based LOOPNewsCaribbean – dated 1 May 2020, described (sex work) the world’s oldest profession, as floundering in the wake of the coronavirus pandemic which has single-handedly, in only a few weeks, curtailed an industry that has been around for millennia. The article featured an interview with a sex worker, quoted as saying, “I feel like running away.”

According to the article, sex workers are seeing firsthand the negative impacts of the pandemic. Even the sex workers who plied their trade in massage parlours and exotic clubs, now find themselves pushed onto the streets, where they are more vulnerable to violence, sexually transmitted infections (STIs) and even human trafficking. Others, especially the marginalised streetwalkers, have been severely impacted by curfews and the paranoia surrounding a disease which is a killer and about which little is known.

Sex tourism is an aspect of revenue generation for several regional governments. This sector, undoubtedly, can be considered a ‘high-end activity’ within the industry that’s very secretive and undercover. The World Tourism Organisation, a specialised agency of the United Nations, defines sex tourism as “trips organised from within the tourism sector, or from outside this sector but using its structures and networks, with the primary purpose of effecting a commercial sexual relationship by the tourist with residents at the destination.”

Is it a case of stigma and discrimination or highly judgmental? This Covid-19 virus is not discriminating against professions or disciplines. Why are we? They are people too!