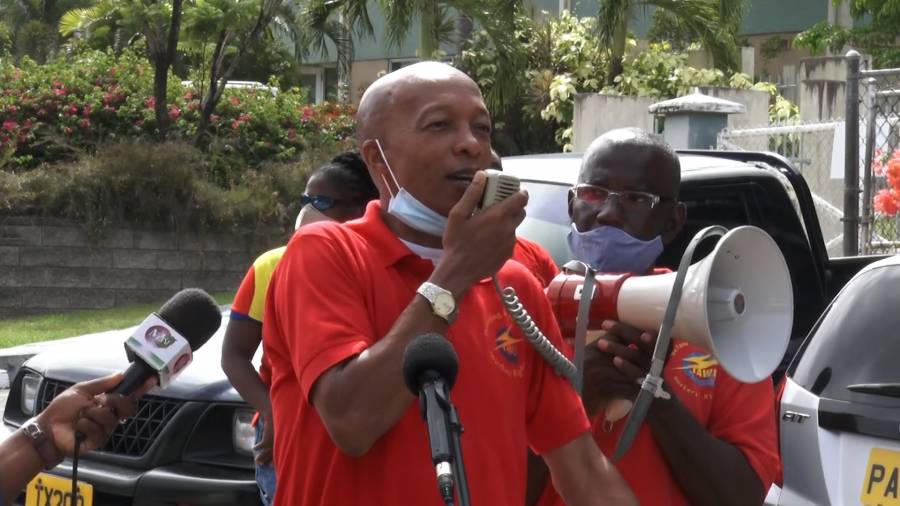 The Grenada Technical and Allied Workers Union (GTAWU) have accused the management of Grenada Electricity Services Ltd (Grenlec) of attempting to recoup losses by unilaterally deciding to dock from workers annual vacation leave during the lockdown period.

President General of TAWU, Andre Lewis, said it is believed that this move by the company may be prompted following the commitment made by the government on behalf of Grenlec to have a 30% reduction in electricity costs, in order to cushion the financial impact of Covid-19 on consumers.

The trade union on Monday, 6 July 2020, and again on Monday, 13 July 2020, held a protest meeting outside the Grenlec main branch on Dusty Highway, in solidarity with workers to send a strong message to the management that the workers will not give up their annual vacation leave during the lockdown period dated 20 April 2020, to 20 May 2020.

Lewis said the management of Grenlec was supposed to inform the union of their decision last Friday following weeks of negotiation on this matter. However, a response from the company has not been forthcoming. “Annual vacation is a liability to the company…plus there were other moves the company was contemplating of taking monies from workers for the commitment the government made on their behalf that they have to fulfil in terms of the electricity reduction. The workers have unanimously decided that they will not give up their Annual vacation during the lockdown period after that period it is understandable and we have told the company that.”

GTAWU’s President General does not see the rationale behind the company’s decision. “Even if the company’s cash office was closed for a while you (customer) still have to pay your bill so there is no need for the company to try to dock the worker’s annual vacation leave during the lockdown.”

GTAWU was also able to mobilise workers from various Grenlec branches across the island to stand in solidarity, except for those workers that are deemed essential to the operation of Grenlec. “We are hopeful that the company will recognise and accept the responsible position that the union have adopted…it is not a good period for a company to force workers into industrial action but the workers are prepared to do what has to be done under the leadership and guidance of the Technical and Allied Workers Union,” he said.

In a release, Grenada Electricity Services Ltd (Grenlec) condemned the arbitrary action taken by the union to stage 2 previous unauthorised meetings that the company said disrupted company’s operation. Grenlec also denies that it “scheduled vacation for team members to recover the discount given to customers. This issue of vacation for team members is completely unrelated to the discount given as part of Grenlec’s partnership with government,” the release said.

On Monday, 13 July 2020, GTAWU again staged another protest meeting outside the Grenlec main branch on Dusty Highway. Lewis, while addressing the workers stated that Grenlec approached GTAWU to agree to have workers take a 10% salary cut for 3 months starting in April. “The company approached the union for you to take a 10% salary cut for April, May and June to make back the money that they gave to the government. The company wanted you to give up 10% of your salary after they went ahead and gave the government $3 million as a rebate for the 30% that consumers were allowed to receive.”

Grenlec stated the matter has been referred to the Labour Commissioner for resolution.

Leave a Reply to a Cancel reply