This story was posted 10 months ago
in Arts/Culture/Entertainment, Community, Youth
2 min. read 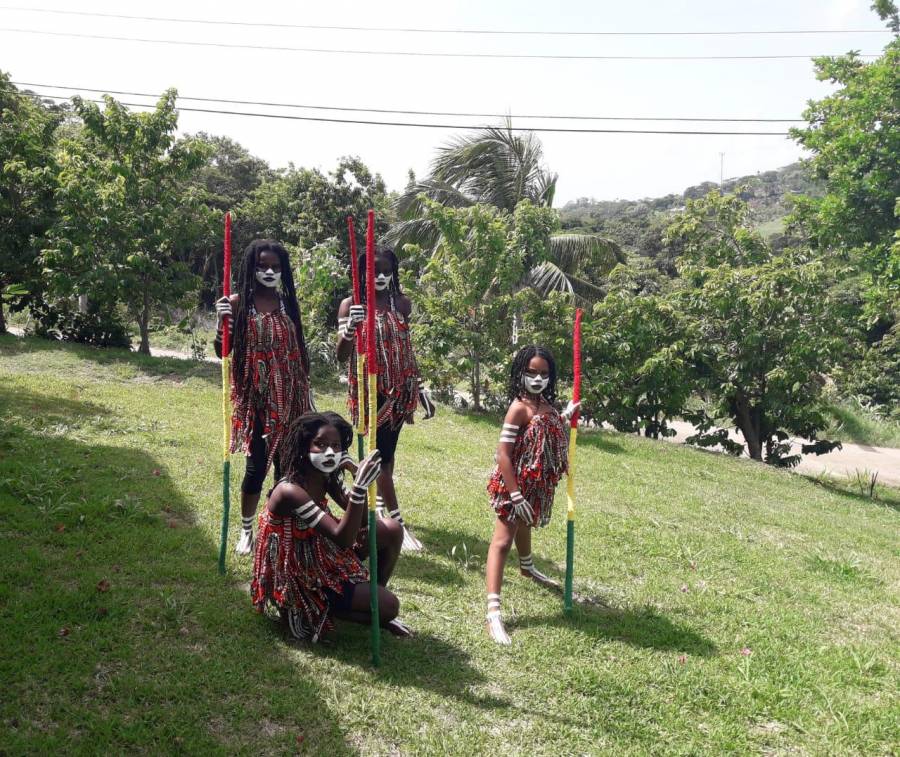 Despite the cancellation of Spicemas 2020 due to the ongoing Covid-19 pandemic, the St Patrick Juju Warriors remain proactive to continue the display of traditional mas’ in the northern parish.

Cultural entertainer and activist, Gertrude Baptiste, better known as Trudi Baptiste, is the founder of the traditional mas’ band and she is also the director of Poetic Drumming Group Inc. Both organisations seek to actively engage young people in a meaningful way by instilling a sense of cultural pride.

Inspired by the rendition Juju Warrior by Trinidadian calypsonian, Linda McCartha Monica Sandy-Lewis, better known as Calypso Rose, in the mid-90s, the St Patrick Juju Warriors took their custom designs from the mas’ portrayal from the music video originally designed by Christopher Pinheiro and Rubadiri Victor who provided the art direction and costume designs.

“The purpose of the creation of the St Patrick Juju Warriors is to recreate the traditional mas’ that has been long forgotten in our culture. My main aim is to keep the culture alive and to continue to be inspired by African roots. The costume itself represents Africa and the rhythm of the drums is deeply influenced by African tempo. I presented the St Patrick Juju Warriors under the registered group Poetic Drumming Group Inc in 2019,” Baptiste said.

Baptiste is spearheading a mas camp at the Eco Art Ranch cultural centre which started on 15 July 2020, for young people as a means to continuing the tradition despite the cancellation of Spicemas 2020. “As for this year, we were preparing for Spice Mas 2020, however, it has been cancelled due to Covid 19. I took it upon myself to stage a small gathering of Juju Warriors funded by myself. The skills I intend to teach whilst delivering the mas’ camp is to build the kids confidence in their cultural expression, build their self-confidence itself, team building and people skills, painting skills, coordination and organisational skills,” she said.

The St Patrick Juju Warriors received funding in 2019 from SpiceMas Corporation and donations by Mindful Bees from Sweden and Patrick Ventour who have assisted the club over the years.