This story was posted 2 years ago
in OPINION/COMMENTARY, Travel/Tourism
7 min. read

Picture the scene: It’s cruise ship day in Grenada, and two giant ships are docked at the Cruise Port, a third at the Cargo Port, and a fourth is anchored offshore.

Including off-duty crew members, up to 20,000 sun- and fun-seeking visitors descend on the island, temporarily increasing its population by one-fifth. Onshore it’s a soup: thousands of tourists are strolling through town, looking for the best duty-free bargains, or just looking. Every shop, restaurant and bar is packed, the streets are so crowded you can barely move. Offshore, catamarans and speedboats are whizzing up and down, water taxis are ferrying tanned tourists to and from Grand Anse Beach, brimming sand-to-sea with deckchairs. Vendors are happy; shopkeepers are happy; restaurants are happy; taxi drivers are happy. And tourists are happy – a win-win, right? Wrong.

You know who aren’t happy? Grenada’s tourists. By whom I mean Grenada’s real tourists: the ones who spend real money. My brother and sister-in-law, Gerry and Pat, are Grenada’s archetypal tourist: they live in Wimbledon and should get gold medals, for the number of times they’ve visited Grenada. They love Grenada’s laid-back tranquility, the friendliness of its people, and most of all the absence of crowds. Except on cruise ship days; they abhor cruise ship days, when they flee from the overcrowded beach and hole up in their room. The old people (i.e. us!) have a term for this: cutting off your nose, to spite your face.

We are pissing off real tourists, those who spend in excess of US$1,000 per visit, to please masses of day-trippers who, according to the cruise ship industry’s own survey, spend a paltry US$45 per visit. Why? Because of numbers, and our politicians’ addiction to big ones. Jamaica’s Tourism Minister Ed Bartlett loves to boast how Jamaica received 1.5 million cruise ship visitors in 2019; but he wasn’t pleased, when I asked him at a conference: Yes Minister, but how much do they spend? Ask the same question to any vendor at the Falmouth Cruise Terminal – you won’t be able to print the answer.

But this is what Caribbean tourism has become: quantity over quality; numbers over impact; size over sustainability. We, and I mean all of us: governments, investors, financiers and so-called experts like me; have been so caught up on numbers – numbers of hotel rooms, numbers of tourists, numbers of flights – that we have totally failed to see the bigger picture: that endless growth, in a finite and usually small island, is (a) short-sighted; (b) misguided; and (c) simply impossible.

Even after the lessons of the Covid pandemic should be clear for all to see, Grenada is continuing with this folly. The government is simultaneously pursuing two multi-billion dollar, Chinese-backed tourism projects: one at Levera, a pristine beach to the north of the island, home to the highly endangered Leatherback Turtle; and another at Mount Hartman, a pristine National Park and home to the highly endangered Grenada Dove. There are only two words that can describe these projects, with thanks to HRH Prince Charles: monstrous carbuncles.

As a Grenadian, it makes me proud when people tell me how beautiful my island is. And not just physical beauty, Grenada has a rich historical heritage, reflected in its iconic Georgian architecture, along with more recent touches that are inherently Grenadian. Not so these carbuncles: Chinese designed mega-hotels which have absolutely nothing in common with their host environment. A host environment that is rapidly being attacked by these same projects. At the beautiful Levera Beach, a swathe of land has been clear cut, and ugly living quarters constructed, for the expected influx of Chinese workers. Further down the coast a beautiful wetlands habitat, La Sagesse (Wisdom), has been utterly destroyed, clear-cut by another developer. And at Mount Hartman, over several years several mega-hotel developments have all stalled, leaving nothing behind but scars in the earth. Repeat: this is a National Park. These projects are the centrepieces of the government’s “tourism-led recovery” strategy.

Tourism-led recovery? In my opinion, tourism will be the last sector of the economy to fully recover – if ever. And it certainly won’t recover through the kinds of mass-market, bargain-basement tourism that the government is currently promoting. The average visitor to Grenada is: (a) older; (b) more affluent; and (c) more discerning than the normal tourist; they come to Grenada, precisely because it’s not a mass-market destination, and doesn’t have the kinds of abominations pictured above.

Haven’t we learned anything at all? Are we still trotting out these same old, failed strategies? That bigger equals better? Every person on the planet is gun-shy about getting on a plane, a shyness that will last for years – particularly among Grenada’s tourist demographic: middle-aged and above. In the post-Covid world (whenever that may be), air travel will become: (a) less competitive; (b) longer queues; and (c) more expensive. It’s not pleasant, spending an eight-hour overnight flight wearing a mask, especially when Southern Europe is just a short hop away (and Spanish beaches are just as nice as ours, believe me).

In addition to being unpleasant, travel will also become more expensive. With the certain failure of many of the world’s airlines, those left standing will be more able to dictate prices, as they used to in the bad old days before liberalization. In aviation, social distancing is expensive: who do you think will pay for that empty seat next to you? You will. Another factor is travel insurance: middle-aged tourists will think long and hard before travelling anywhere without cover, and in the post-Covid world, premiums will become a lot more expensive.

And in the midst of this global pandemonium, this is when we decide to promote mass-market tourism? Do the math: it doesn’t compute.

Not only doesn’t it compute, it’s not even doable. Grenada is a tiny island, 23 miles from stem to stern, there’s no capacity to absorb a billion-dollar project, let alone two. Yet our Prime Minister assures us: “The initial stages of work on the $300 million hotel project by Range Developments in St David and the over $1 billion Grenada National Resort Project in St Patrick are now underway.” Do these “initial stages of work” include anything more than destroying the previously pristine environment? In return for destroying our natural habitats, how many Grenadians have been employed on these billion-dollar projects? More to the point: are these the type of tourism development that Grenada needs?

All my life I’ve worked in finance, I’m the archetypal numbers nerd. I would love to see the feasibility studies for these projects! How many hotel rooms would a billion dollars build? Two billion? Three? How many new tourists would need to visit Grenada, paying what rate, to make a billion-dollar hotel profitable? How many Grenadians would it employ? We may not know the answer to the first two questions, but we certainly know the third: not many. Chinese businesses abroad have a proven record of hiring predominantly Chinese workers. The only locals hired on previous Chinese-funded projects in Grenada have been a handful of janitors and security guards. Where will we find the thousands of trained hotel staff to work in these Chinese mega-hotels? Don’t be silly: China.

In Grenada, you can’t get further from the airport than Levera Beach: via a long, potholed, narrow and very winding road. Are we going to build a new high-speed highway, to whisk these thousands of new visitors to the previously pristine beaches of Northern Grenada? Water, electricity, sewerage and solid waste disposal: Grenada can’t even provide sufficient infrastructure for its own citizens, how will we provide for these billion-dollar projects?

What is particularly depressing about these mega-projects, is the total lack of any effective environmental oversight. My good friend the irrepressible Dr Hazel DaBreo is leading the charge to get some answers on the La Sagesse debacle, where the developers ignored their own Environmental Impact Assessment (EIA) and clear-cut hundreds of acres of mangroves, in one of Grenada’s most diverse natural habitats. The Chinese projects do not even have this minimal level of environmental screening – they just move in with the bulldozers.

Covid-19 has been a harsh lesson in reality: that our over-reliance on a fickle industry like tourism is a double-edged sword. And to use the vernacular: we just get a hard lash, with the backside of the machete! But do we learn? Evidently not, because in response to the pandemic that has exposed the fragility of tourism, what do we do? Rely on tourism even more! Isn’t it clear to any rational person, that we need a change of direction?

Naturally, tourism must play a central role in the regeneration of the Grenadian economy, but the crucial question is: What kind of tourism? You can’t fit square pegs into round holes; a country’s tourism strategy has to gel with its natural and human attributes. There are 2 distinct types of destination: mass-market tourism; and niche tourism; and Grenada sits squarely in the niche category. Our biggest hotel only has about 250 rooms, tiny by mass-market standards. During a recession, it is often the smaller, more upmarket hotels that are better able to weather the storm; as their clientele tends to be more well-heeled than the mass-market segment.

My contention is simple: These are the wrong hotels, for the wrong market, at the wrong time, on the wrong island. Apart from destroying the environment, bad design, and wrong locations; what else do these mega-projects all have in common? Their financing. None of them is backed by the traditional deep-pocketed “foreign investor”: a single entity or consortium that put their money where their mouth is and invests millions to make their dreams a reality. All these projects are predicated on the sale of one thing: Grenadian passports.

But that’s another story – altogether!

Watch out for Part 2 – Island for Sale: Grenada

NOW Grenada is not responsible for the opinions, statements or media content presented by contributors. In case of abuse, click here to report.
Tags: brian samuella sagesseleveramount hartmannational parktourism
Next Post 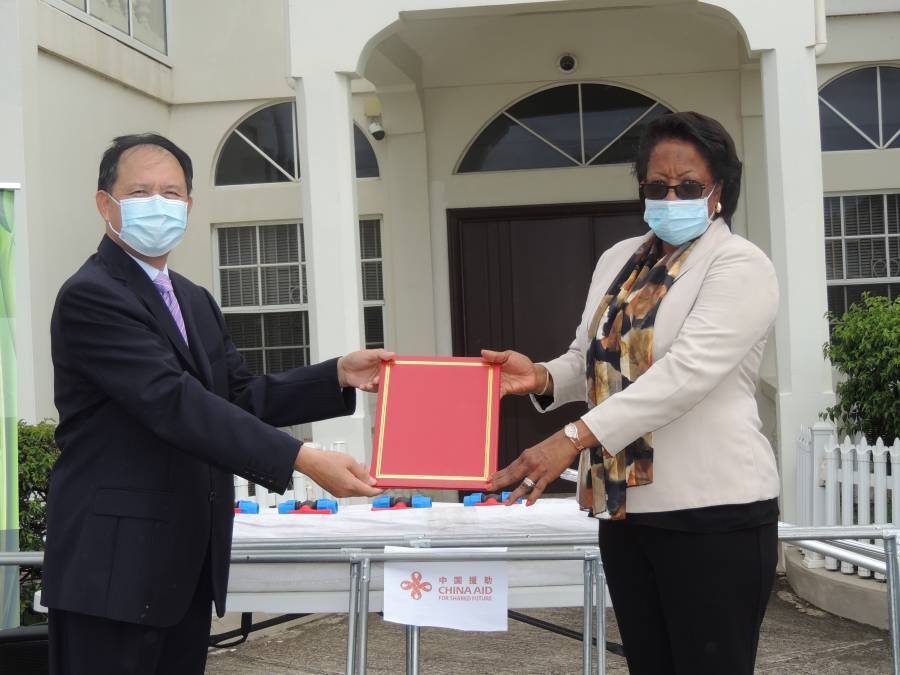 Donated greenhouses to be used in Protective Culture Technology Initiative