This story was posted 7 months ago
in Business
3 min. read 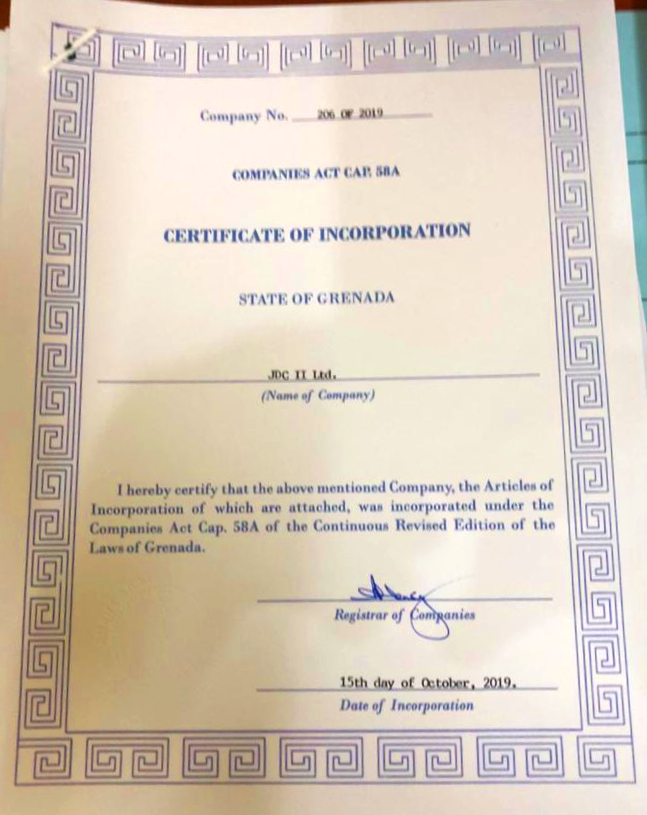 JDCII registered in Grenada as mandated in the Companies Act
Share

Public records have contradicted the claim made by a lawyer that the company which purchased the surplus land that is part of Mt Cinnamon Hotel development, is not legally registered in Grenada as mandated in the Companies Act.

“The company that they said purchased this land is literally non-existent in Grenada,” LaFeuille told journalists in a virtual news conference in which her client listened but was not allowed to answer any questions. “We sought to do a thorough search of the records, there were no records of this sale purchase at the registry, we did a thorough search, we went so far as to investigate if this company was set up as an international business company,” said LaFeuille, a lawyer at the firm Caricom Attorneys.

“We even went as far that, there were no records whatsoever, not on the computer system, not in the deeds acknowledgement book, nowhere. Furthermore, we went as far as the Corporate Affairs and Intellectual Property Office (CAIPO) to do our searches. The corporate registry came back empty,” she said, confirming that the searches were done during the month of May.

However, a search conducted at the CAIPO confirmed that JDCII is a legally registered company that was incorporated in October 2019 under the Companies Act Cap 58A of the Continuous Revised edition of the Laws of Grenada.

The Articles of Incorporation were filed, according to records at the CAIPO’s office, on 15 October 2019. The incorporator is listed as James A L Bristol while the appointed director is businessman Naguib Sawiris, the person behind SilverSands, a 5-star tourism property on Grand Anse beach. The classes and any maximum number of shares that the company is authorised to issue is 500,000 ordinary shares.

It must be noted that in December 2018, Grenada’s Houses of Parliament approved legislation to repeal its International Business laws and as a result, all companies registered under those laws must wind up by 31 December 2020.

Since the passage of that law, the Grenada Authority for the Regulation of Financial Institutions (GARFIN), which is the registry for international business, ceased to register any new company. Also, during the month of May, government offices did not function as normal with onsite staff, and the CAIPO office was one affected. However, lawyers’ requests for information were accepted and answered via email.

LaFeuille did not say if her search was conducted in person or via an email request. The public records at the CAIPO are not available online.