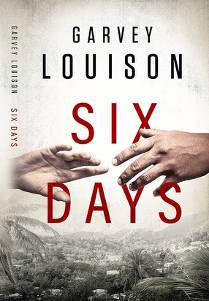 Set in Grenada, Garvey Louison’s new book, Six Days, is a work of fiction that spins a tale of intrigue, romance, psychological trauma, loyalty and betrayal.

In Six Days, Prime Minister Maxim Archer and his education minister, Janis Cudjoe, return to Grenada from a meeting in Cuba, only to be placed under house arrest by the security forces.

Six Days is a moving and traumatic account of the collapse of a people’s revolution and the destructive end of a progressive process of change in a society.

Thirty-eight year old Maxim has held the reins of leadership in Grenada for 5 years, but this is now threatened by domestic and foreign forces. The people’s revolution and Maxim’s vision for the future are in jeopardy by the treachery of his friend and colleague, a devious career politician, Barry Boca, who in turn is surrounded by apostles whose pockets are lined by the CIA.

Maxim’s trusted comrade, Levi, visits Maxim and Janis, and negotiates with Barry Boca for a peaceful resolution. During negotiations, Levi realises that he has only 6 days before violence rages in the city of St George’s.

During the 6 days, Maxim and Janis, while in the depths of their secret romance, battle for deliverance beneath the shadow of the soldiers and guns outside their window.

Time is against Levi as he fights for Maxim and Janis’ release from house arrest and the restoration of Maxim as prime minister.

Six Days is Garvey Louison’s second published work of fiction. His collection of short stories, Out of the Blue was released in 2018. Those stories are also available individually as Tales from My Caribbean Crypt on Kindle. Six Days is available at Art and Soul Books in Spiceland Mall in Morne Rouge, St George’s, and on Amazon.

Garvey’s catalogue of writing includes numerous unpublished short stories, fiction and screenplays. He is currently working with editors on his 2 forthcoming novels. He believes that one doesn’t write for fame or fortune. “It may or may not happen. That is not an objective. I write for posterity. The people who come after us must know what happened in times past.”

NOW Grenada is not responsible for the opinions, statements or media content presented by contributors. In case of abuse, click here to report.
Tags: garvey louisonrevolutionsix days
Next Post