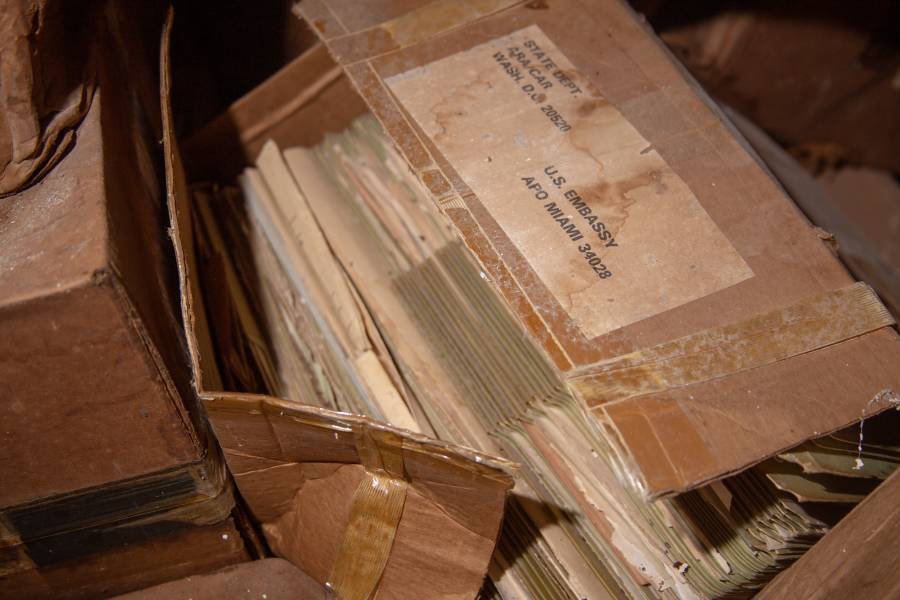 This story was posted 1 year ago
in Education, History, Politics
3 min. read

PRG state documents removed from by US military forces during Operation Urgent Fury returned to Grenada in 1985. Photo taken in 2019, and used with permission
Share

State documents of the People’s Revolutionary Government (PRG) seized by United States military forces during the October 1983 Grenada intervention, were returned to the country more than a decade ago, and are under the protection of the Royal Grenada Police Force (RGPF).

“I will be very honest, my understanding is, yes during the intervention we did seize documents and we kept them for a period of time, but every piece of paper that the United States Government seized was turned over to the Government of Grenada,” US Ambassador, Linda Taglialatela, said in an interview on 21 October 2020 while on an official visit to Grenada.

“So whatever documentation is out there, the Government of Grenada has them. It is up to them if they are willing to share with their citizens and that is all I can say,” she added, in response to a question which focused on the status of the documents that were removed from the island by the military forces during Operation Urgent Fury.

The documents seized 37 years ago include minutes of meetings of the decision-makers by officials of the People’s Revolutionary Government and the Revolutionary Military Council, as well as letters of concern from Grenadians residing in United Kingdom and the USA, addressed to then Prime Minister Maurice Bishop.

“You have them all,” Ambassador Taglialatela said. She was unable to immediately recall which ruling administration received the boxes of documents. The boxes are presently in a storeroom at Police Headquarters, Fort George and are treated with a powdered pesticide from time to time to avoid a termite infestation.

A search of articles on National Archives of Grenada shows that some of the documents were returned in 1985.

Current Tourism Minister Dr Clarice Modeste, and Minister Peter David who served as a tourism minister for a period during the National Democratic Congress-Tillman Thomas administration (2008 to 2013) and is presently the Minister for Agriculture, Lands and Labour, have both confirmed that the documents are assigned to be digitised as a project for Grenada under the OECS Regional Tourism Competitiveness Project.

“The documents are being removed box by box as a project activity of the OECS competitiveness project and be digitised to protect them,” said a senior government official who is associated with the project. The person was not in a position to say if the public will have access to the documents upon completion of the digitised process, and whether or not the police will continue to be to the custodian of the documents.

The objective of the OECS Competitiveness Project is to facilitate access and movement of travellers through a pilot ferry service, rehabilitate select tourism sites such as Fort George in Grenada, Fort Charlotte in St Vincent and the Grenadines, and Castries in Saint Lucia, and help position these countries as one multi-island travel destination. Through the project, Fort George, which is presently the headquarters of the Royal Grenada Police Force, is scheduled to become a major tourist attraction and the police headquarters be relocated.

Some of the state documents of the People’s Revolutionary Government (PRG) seized by the United States military forces during the October 1983 Grenada intervention are available online at: Grenada documents an overview and selection September 1984. See also the CIA Status of efforts to exploit Grenada documents.