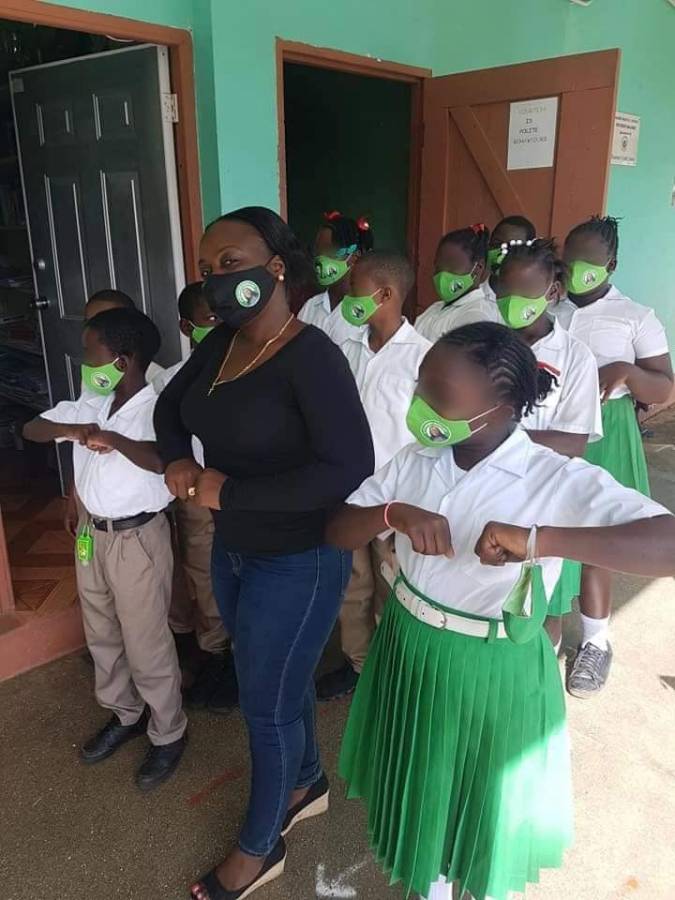 This story was posted 1 year ago
in Education, OPINION/COMMENTARY, Politics, Youth
3 min. read

For most of last week, social media in Grenada was abuzz with expressions of disappointment about the initiative undertaken by Kate Lewis, Minister for Youth, to provide face masks for students, followed by photographs with students on school compounds published via Facebook.

The backlash from this should be a wakeup call for all politicians who believe that children should be used as billboards, flyers, and other forms of branding avenues in their quest for majority votes on polling day.

“Children need to be protected from all forms of abuse” is a mantra for all child rights advocates, and this initiative is clearly one that borders on the “exploitation of minors” for political gain.

I hate to believe that this initiative was all her idea from conception to photo opportunity with the young minds. There must have been someone along the way who had to see that the final step was bordering on wrong.

If no one did, then at least the teacher in the class should have protected her students by reminding the minister about the Education Act. If that teacher did, then I apologise to him or her. I, therefore, ask why Minister Lewis felt so emboldened to “distribute, pose and publish” knowing fully well that she was violating an act that is not accepted by the ministry.

Whoever advised Minister Lewis to engage in such “planting of the seeds” initiative should not only be terminated from any arrangement of “image-building” with her but should also be made to personally apologise to the students who were innocently caught up in the excitement of “meeting the minister or the Member of Parliament.”

I will venture to say that all those behind this initiative are apparently not aware of common decency and moral considerations when it comes to the protection of children, who by our law are citizens under the age of 18.

This entire stunt not only violated the Ministry of Education’s legislation about distributing products or services on school compounds without authorisation, but also the United Nations Convention on the Rights of The Child. This initiative is not in the best interest of the child.

Children need to be protected from all politicians whose sole intentions are undertaken with a certain agenda that is not based on humane genuine concern. Lewis could have given out all the face masks in the world and children could have displayed them publicly, if only she had a more informed unbiased advisor or team guiding her social responsibility initiatives.

Did they all fail to attend political ethics sessions? There are many creative ways in which this good initiative could have been implemented without the political branding that compromised students and the school.

General Secretary Roland Bhola, during a New National Party virtual news conference on Thursday, emphasised and at the same time reminded listeners that there is a line of separation between Government and Party.

Minister Lewis’ distribution of face masks and publishing of photos with students who are clearly minors crossed the line separating Government and Party, and crossed the lines between good judgment, political ambition, and personal achievement.

NOW Grenada is not responsible for the opinions, statements or media content presented by contributors. In case of abuse, click here to report.
Tags: campaignconvention on the rights of the childcoronaviruscovid-19governmentkate lewislinda strakermaskministry of educationnew national partynnpoffice of the prime ministeruncrcunited nations
Next Post