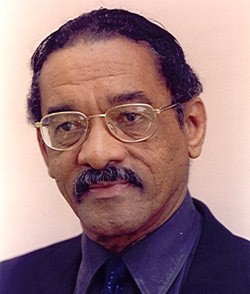 This story was posted 1 year ago
in Lifestyle
2 min. read

He was born in Grenada in 1937 but he is also a national of Barbados, and for the 54th Anniversary of Independence on 30 November, Tony Gibbs was awarded the Companion of Honour of Barbados – that country’s second-highest honour.

The award was in recognition of his sterling contribution in the field of Engineering in Barbados and the Caribbean. He is the first engineer to receive the Companion of Honour of Barbados.

Tony Gibbs is an alumnus of Presentation Brothers College in Grenada and a founding member of the Grenada Institute of Professional Engineers.  He was the first Caribbean person to be elected a Fellow of the Royal Academy of Engineering.

The Honourable Tony Gibbs continues his professional work throughout the Caribbean with current assignments in Guyana, Grenada and Belize. Gibbs is a pioneer in developing buildings in the Caribbean and elsewhere to withstand natural hazards such as hurricanes and earthquakes. He was the OAS consultant to develop Grenada’s building Code.

Other interests of this civil engineer involve working with architects and other professionals to create innovative designs for hazard-resistant buildings using a variety of high-strength concrete forms. He has worked in every country in the region and was personally responsible for over 1,600 building projects of his firm over a period of 35 years. In addition to designing buildings to withstand natural hazards, he has taken a keen and practical interest in the interrelationship of engineering and insurance.

Gibbs played a critical role on the Caribbean Uniform Building Code committee and he has held top positions at The Institution of Structural Engineers in The United Kingdom, and the American Association for Wind Engineering.

NOW Grenada is not responsible for the opinions, statements or media content presented by contributors. In case of abuse, click here to report.
Tags: barbadoscompanion of honour of barbadosengineergrenada institute of professional engineerslinda strakertony gibbs
Next Post