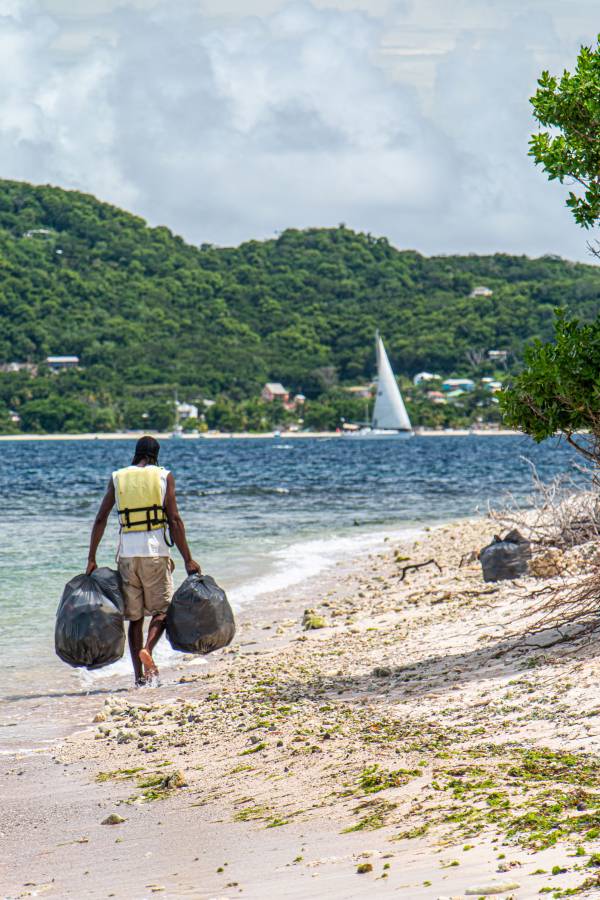 This story was posted 1 year ago
in Environment, PRESS RELEASE
3 min. read

A volunteer carries bags of collected litter to load onto a boat for proper disposal. Photo: Devon Baker
Share

As part of its commitment to reducing man-made threats to seabirds and other marine and island biodiversity, the organisation Environmental Protection in the Caribbean (EPIC) has sponsored coastal litter cleanups on several uninhabited seabird breeding islands of the transboundary Grenadines, namely Mabouya, White, Sandy, and Petit Rameau.

To date, hundreds of pounds of garbage have been removed by volunteers, consisting primarily of plastic water bottles and other single use plastics, pieces of fishing nets, ropes, or foam. On one single island volunteers collected 28 large garbage bags. On another they gathered 1,174 plastic bottles and 165 shoes.

Unfortunately, the efforts so far have only skimmed the surface of the problem. While main islands have been receiving enhanced attention to marine litter on their shores in recent years, it continues to pile up on offshore islands where it either washes up on shores or is carelessly left behind by persons who visit these islands. On the islands frequented by people for recreation such as barbeques and day-trips, glass bottles, food cans, cling film, plastic utensils, Styrofoam containers and plastic wrappers were common.

The cleanups, which began in September as part of the International Coastal Cleanup, are being carried out by EPIC and local partner Ocean Spirits, through funding from the US Fish and Wildlife Service (USFWS), USAID, and the Specially Protected Areas and Wildlife for the Wider Caribbean Region (SPAW-RAC). Activities are being conducted in coordination with the Grenadines Seabird Guardians, a local group of citizen-scientists trained and mobilised by EPIC to monitor seabird colonies and reduce threats to wildlife at remote, uninhabited islands. Volunteer organisations present at cleanups included Kipaji Inc. (Carriacou), Dr Carter Vet (Grenada), Carriacou Animal Hospital (Carriacou), Tobago Cays Marine Park (Union Island) and Sustainable Grenadines Inc. (Union Island).

The main purpose of the cleanups is to protect the regionally and globally significant seabird nesting colonies that can be found throughout the transboundary Grenadine islands and endangered wildlife, such as the critically endangered hawksbill and vulnerable leatherback sea turtles. Many species of seabirds and all species of sea turtles are known to accidentally ingest and become entangled in marine litter, which can lead to injury and even death.

Seabirds and sea turtles are among the most threatened wildlife groups on earth and difficult to protect due to their wide-ranging behaviour and use of remote areas. Global seabird decline is estimated at more than 70% over the past 70 years, while the loss in tropical regions, such as the Grenadines, is believed to be much higher. Of the 7 sea turtle species worldwide, 6 are currently listed as vulnerable, endangered, or critically endangered. In the Grenadines, seabirds and sea turtles face many threats, including illegal harvesting, by-catch in fishing nets, habitat destruction through development, the negative impacts of invasive mammals such as mongooses and rats, and natural hazards. Pollution, mainly marine debris, is increasingly being encountered in our oceans and on many of the remote Grenadine islands, which forces seabirds and sea turtles to nest among trash. The Brown Noddy seabird was also recently observed in the Grenadines incorporating plastic into nests.

EPIC and Ocean Spirits thank our local volunteers and the Grenadines Seabird Guardians, supporters, and friends for helping to reduce this and other threats through their continued commitment to conserving seabirds, sea turtles and their offshore island homes.

NOW Grenada is not responsible for the opinions, statements or media content presented by contributors. In case of abuse, click here to report.
Tags: environmental protection in the caribbeanepicgrenadinesgrenadines seabird guardiansocean spiritssea turtles
Next Post