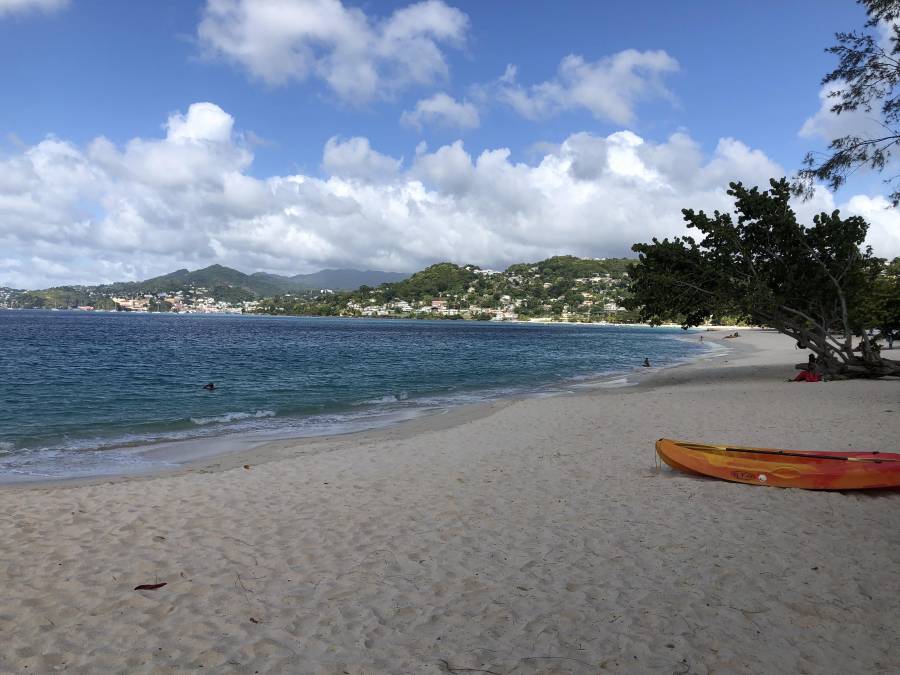 This story was posted 2 years ago
in Agriculture/Fisheries, Environment, Watersports
4 min. read

Marine Scientist and Divemaster Christine Finney said shark sightings in the marine environment of neighbouring Eastern Caribbean islands should not lead sea goers to panic in the wake of a reported shark attack in St Kitts.

According to the report, a female student from Texas attending Ross University School of Veterinary Medicine in St Kitts sustained injuries from a shark attack on Saturday, 9 January 2020, near Booby Island in the Narrows Channel, between St Kitts and Nevis.

The reported shark attacks prompted regional fisheries departments to issue advisories cautioning the public to remain vigilant when venturing out to sea.

Finney, who heads ECO Dive dive shop, assures the public that there is no real need to fear since shark sightings near Grenada’s coastline are extremely rare. “When we are scuba diving, there are what we call ground sharks or the nurse sharks we will see on a fairly regular basis. They are like a big catfish; they sleep during the day and feed at night, but they are not interested in people at all. We can get them about a mile or two off the coast of Grenada, but they don’t come in nearshore, and they are not a threat to people,” Finney said.

In the unlikely event that a shark is sighted near the coastline, Finney urges people to remain calm, exit the water safety and report these sighting to the authorities.

Data from the International Shark Attack File (ISAF) show that only 9 people were killed in some 60 shark attacks worldwide in 2020. Statistically speaking, more people have died as a result of falling coconuts as opposed to shark attacks. Data shows that falling coconuts kill at least 150 people annually.

“It’s statistically more dangerous to sit under a coconut tree than it is to swim in the sea in terms of injury. There are more injuries from coconuts and champagne corks, drastically more than there are from sharks. Now, it doesn’t mean that we should get complacent. It doesn’t mean that we should snuggle a shark or try to pet a shark because they need respect,” Finney said.

So why are people more inclined to fear sharks rather than falling coconuts? The marine scientist said the answer lies with Hollywood movies such as JAWS and The Meg which have painted sharks in a bad light by portraying them as vicious creatures. This she said is far from reality as the bigger threat to sharks comes from commercial fishing. “Sharks are endangered, and there is a lot of them critically endangered that might not actually exist in our waters in my lifetime which is terrifying because they are being so overfished.”

There are typically 5 shark species a diver is likely to encounter while scuba diving in the Caribbean Sea. They include:

Director of the Grenada Lifeguards and swimming instructor Deb Eastwood, who also spearheads a swimming programme called ‘Get Grenada Swimming’, has noticed a decline in beachgoers since the release of the advisory.

As one of the Grenada Lifeguards’ directors, Eastwood understands the fear and concerns that citizens would have, but she also reassures people that there is no need to panic. She indicated that her lifeguards have been alerted and that there will be an established protocol in place for handling the unlikely event of a shark coming near shore.

“If we do have a shark sighting, first of all, we must make sure that it is a shark sighting because sometimes people think there are sharks in the water, but we have lots of species that have fins that resemble a shark’s. Now if there are any issues then our lifeguards will go out on the kayaks or they will partner with one of the dive shops to use one of their rescue boats to go out and attempt a rescue if it’s needed, but they need to be safe themselves and then we will be alerted, and then we will alert the Ministry of Tourism and the Fisheries Division,” Eastwood said.

Marine scientists who study shark behaviour attest that most so-called “attacks” are primarily sharks simply being curious by attempting to ascertain what unfamiliar objects are in the water. Because biting is the only way a shark can do so, sadly for humans, this can result in serious injuries.

NOW Grenada is not responsible for the opinions, statements or media content presented by contributors. In case of abuse, click here to report.
Tags: christine finneycurlan campbelldeb eastwoodinternational shark attack fileshark
Next Post