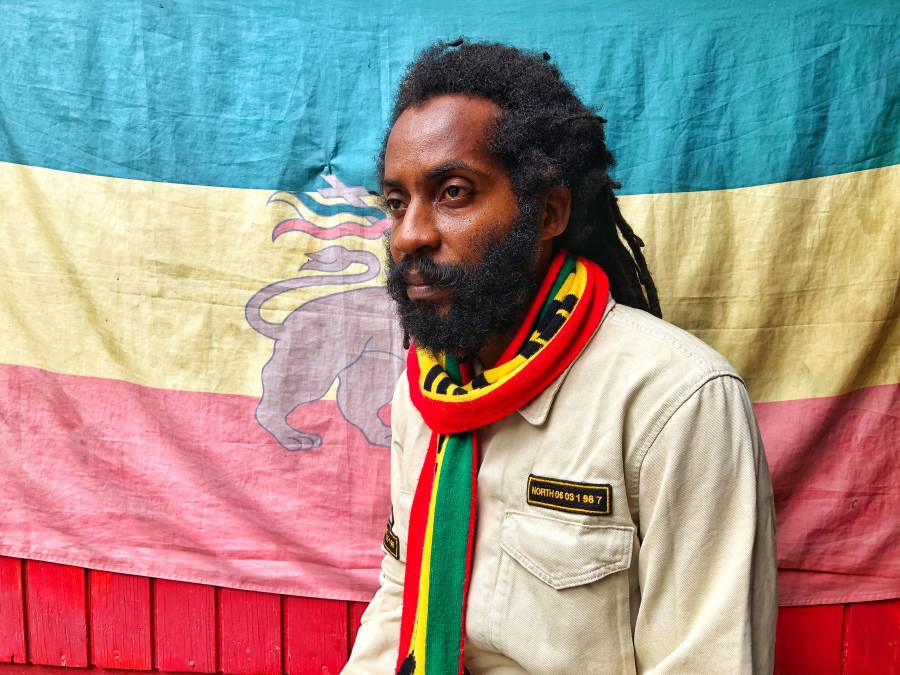 This story was posted 9 months ago
in Health
4 min. read

Lower St John Street resident, reggae musician and member of the Rastafarian faith, Johnnie “Black Iron” Williams, said although he is not anti-vaccine, he is sceptical about allowing his family – his wife and 5 children – to become vaccinated against the coronavirus. If vaccination is made mandatory, he is prepared to have his children homeschooled.

The Prime Minister stated during a press conference that it is not the intent of his administration to force anyone to take the vaccine, although he strongly recommends they do. He said that he and his cabinet colleagues are prepared to lead by example and receive the vaccine once it becomes available.

Disinformation surrounding the coronavirus vaccine has certainly created panic around the world, including the Rastafarian movement in the Caribbean. The religious movement known to be quite vocal about the downfall of the oppressive “Babylon” system, believes this is just another attempt at total global domination targeted at systemic extermination of non-white people to curb population growth.

“I am not against vaccine, because in some cases, vaccine has proven to be effective, but in other cases, vaccine has been proven to be used for biological warfare especially against the black race.” Williams referred to the Tuskegee Syphilis Study, formerly called the “Tuskegee Study of Untreated Syphilis in the Negro Male” carried out in 1932 by the US Public Health Service (PHS), where 600 African American men were told they were being treated for “bad blood.” The objective was to study the disease’s natural progression and the men did not receive proper treatment needed to cure their illness.

Williams believes that not enough information about the side effects of the coronavirus vaccine and its ingredients has been given to the Grenadian public. “I do not know of any pharmaceutical product that does not come with side effects, so we must never ignore the side effects. If there are side effects, then there should be exemptions for people like myself, whose vegan dietary lifestyle is a part of my way of life. One of my main concerns is the ingredients used to create the vaccine and from my investigation, I became concerned that one of the ingredients in the vaccine is MRC5, which is tissues from aborted foetus.”

According to a Reuters Fact Check article, a Facebook video discussing the Oxford AstraZeneca vaccine for Covid-19 has falsely claimed it contains tissue from an aborted human foetus. The article notes: “It is not accurate to say MRC-5 cell lines are the same cells from an aborted foetus. They are cell lines that have been grown in a laboratory from a primary cell culture originally taken from a foetus.”

Vaccine manufacturers like Pfizer and Moderna have been apparently granted immunity from liability in the unlikely event that people decide to sue after experiencing adverse side effects from taking the vaccine. The most common side effects of the vaccines are:

These side effects usually start within a day or two of getting the vaccine, but are expected to go away within a few days.

Also of concern to Williams is that ordinary poor people will have no legal recourse of attaining compensation in the unlikely event that they experience adverse side effects. Williams has advised that government should be advocating for boosting one’s immune system through healthier food intake, rather than focusing on vaccination. Williams also said based on his research, the abbreviation for Covid-19 is Certificate of Vaccination Identification by Artificial Intelligence, an agenda pushed by the Bill & Melinda Gates Foundation to acquire a digital certificate of vaccination records.

There is no evidence to support this claim, which has been fuelled by social media. Covid-19 is the abbreviated name given to the coronavirus disease 2019 by the World Health Organisation (WHO) abbreviated the name in February 2020, where ‘CO’ stands for ‘corona,’ ‘VI’ for ‘virus,’ and ‘D’ for disease, and ‘19’ for 2019.

Speaking on the subject, Dr Sonia Nixon, Senior Medical Officer in the Ministry of Health stated that it is quite common for people to be sceptical about being vaccinated, especially in an age where social media has given a platform for the spread of disinformation presumable from credible sources. She said that over the years, anti-vaccine people have benefitted from herd immunity, which is indirect protection from an infectious disease that occurs when a certain number of the population becomes immune either through vaccination or immunity developed through the previous infection. While understanding that there are sectors of our population that reserve the right not to be vaccinated, it is of paramount importance that other people acquire the correct information before making a decision.

With the ever-increasing number of Covid cases and deaths throughout the world, the urgency for a vaccine is evident. In Grenada, while the recorded cases of the virus remain relatively low with one recorded Covid-19 related death, health officials are preparing to acquire its share of vaccines and have informed the nation that information on the rollout will be provided.

Attempts to get feedback on the subject of Covid-19 vaccination from the leaders of the Nyabinghi order and Twelve Tribes proved futile.