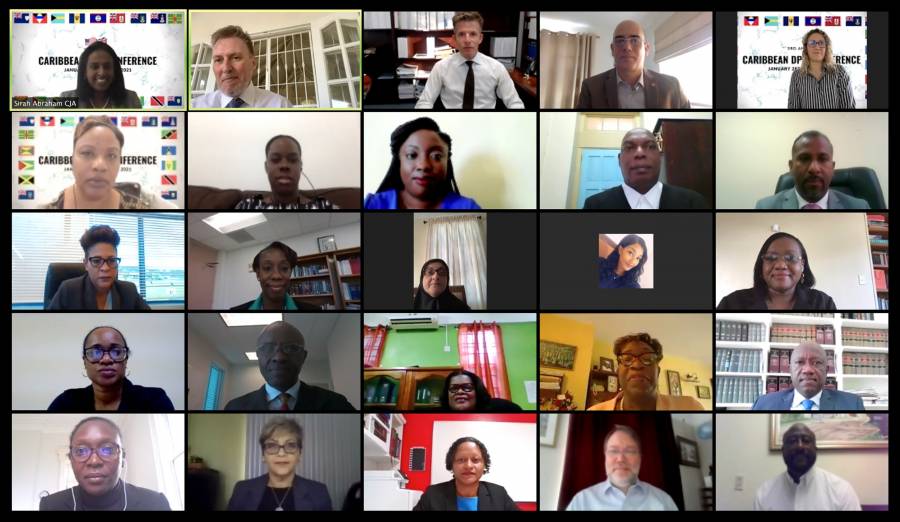 This story was posted 2 years ago
in Law, PRESS RELEASE
2 min. read

Directors of Public Prosecutions (DPPs) from 18 Caribbean islands came together at a virtual conference 28-29 January to discuss some of the current difficulties and challenges they collectively face, as organised crime groups exploit structural vulnerabilities and benefit from the ongoing Covid-19 crisis.

Barbados, the OECS countries of Antigua and Barbuda, Dominica, Grenada, St Kitts and Nevis, St Lucia and St Vincent and the Grenadines, Jamaica, Guyana, Trinidad and Tobago, Bahamas, Belize and the British Overseas Territories were all represented.

Conference delegates heard from regional and international experts on a range of issues, including the resumption of trials after Covid-19 and vulnerable witnesses in serious crime and sexual exploitation cases, recognising the impact on children as online and offline sexual abuse increased.

Justice of Appeal of the Supreme Court of Trinidad and Tobago, Lisa Ramsumair-Hinds and Cheryl-Lynn Vidal, Director of Public Prosecutions from Belize presented and led a discussion on trials held with judges alone, in the light of the ban on jury trials during the pandemic.

DPPs were treated to a wellness session on productivity and managing stress by Mathew Brown, productivity ‘Ninja’. Legal and administrative issues faced by DPPs were the subject of a roundtable discussion led by Donna Babb-Agard, QC, DPP Barbados, including appeals on points of law during trials and sentencing guidelines.

UK Chargé d’Affaires Craig Fulton in opening the conference recognised that the last year had presented challenges which significantly affected DPPs. Noting the importance of the conference, he said, “My hope is that DPPs can identify some of the regional best practices in the fight against serious organised crime and explore the potential for a collaborative approach in policy-making in these areas in the Caribbean.”

Matthew V Cassetta, Director INL at the US Embassy, noted that the conference themes echoed the Joint Action Statement of the 9th Caribbean-US Security Cooperation Dialog. He mentioned the increased attention paid to protecting the rights of vulnerable populations, such as youth, women and minorities and said that these were topics of striking relevance to all at this moment in history.

Criminal Justice Adviser to Barbados and the Eastern Caribbean Sirah Abraham, whose post is funded by the United States of America and the United Kingdom, lauded the conference as yet another demonstration of the US’s and UK’s commitment to supporting the role of the DPP, especially in the context of the challenges posed by the Covid-19 pandemic.

NOW Grenada is not responsible for the opinions, statements or media content presented by contributors. In case of abuse, click here to report.
Tags: british high commissioncoronaviruscovid-19director of public prosecutionsdpporganised crime
Next Post

Statement on the passing of Levi Benoit