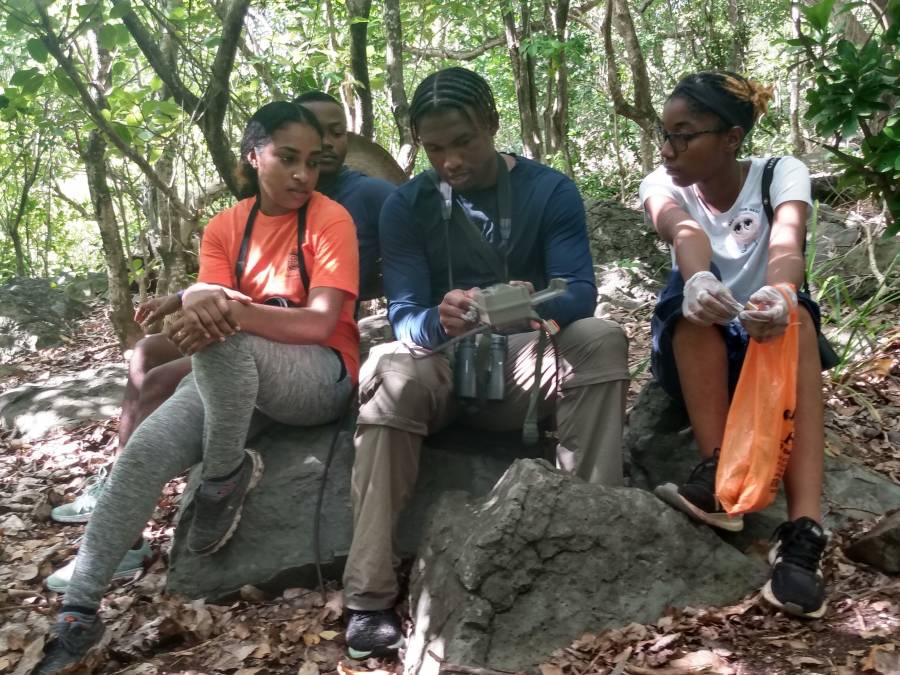 Members of the research team learn how to use a motion-triggered camera which can be left to record observations in remote areas. Photo: Kate Charles
Share

Throughout 2019-2020 Environmental Protection in the Caribbean (EPIC) has focused efforts to build upon previous investigations in the Grenadines island chain to document invasive mammal species presence at offshore Grenadine islands.

The uninhabited islands of the Grenadines are globally important for nesting seabirds and host regionally endemic and endangered reptile species, such as sea turtles, all of which are known to be especially vulnerable to invasive mammal species where they occur.

Invasive species are organisms that are purposefully or accidentally introduced to areas beyond their native ranges, where they establish and become harmful to the local environment, oftentimes with negative consequences for local economies and even human health. Their role in extirpations and extinctions of native species is well documented worldwide.

Introductions of non-native mammal species to the Caribbean region coincides with arrivals of human inhabitants. Domestic animals were often brought along as a source of nutrition and companionship, while others such as rodents were unintentionally introduced. One of the more well-known invasive mammal species in the region is the mongoose, existing on many Caribbean islands, including mainland Grenada and St Vincent. While mongooses were purposefully introduced to control burgeoning rodent populations, they have been especially detrimental to native reptile and bird populations throughout the region, including the critically endangered Grenada Dove.

Introduced mammals known to exist on the uninhabited islands of the Grenadines consist of grazing and predatory animals, including goats, sheep, cows, dogs, cats, rats, mice and opossum. While predatory animals can directly injure or kill native species, livestock can trample nests, cause disturbance and significantly reduce plant cover, contributing to erosion and smothering of adjacent coral reef and fisheries habitat.

Between 2019-2020, the “Grenadines Seabird Guardians” citizen scientist group visited 37 offshore islands in Grenada and St Vincent and the Grenadines, conducting land and boat-based observations of wildlife, which included documenting the presence of non-native mammals. The most frequently detected non-native mammals were feral goats, with populations confirmed on at least 16 of the islands visited. Other species observed included sheep, cats and dogs.

In December 2020, EPIC and Ocean Spirits Inc. joined efforts to conduct land-based surveys focused on detecting rodents with baited tracking tunnels and trail cameras. These investigations targeted seven offshore islands in the Grenada Grenadines, with field support from Dr Kenrith Carter (Grenada), Kendon James (Grenada), Vaughn Thomas (Carriacou), and Rene Isaacs (Carriacou). These surveys contributed to the current knowledgebase of rodents on at least eight uninhabited islands, with suspected presence at additional sites. Rats, in particular, are known for their strong swimming abilities between islands, and although they were not detected at some sites, the lack of detection is not proof of their absence.

Despite legislation prohibiting the release of domestic animals on Crown land and in protected areas in Grenada and Saint Vincent and the Grenadines, research has shown that they regularly occur in such areas with minimal to no intervention. Feral goat populations are prevalent in Wildlife Reserves, in International Bird Areas (IBAs), occur on islands in the Tobago Cays Marine Park (TCMP), the Sandy Island Oyster Bed Marine Protected Area (SIOBMPA), and in several proposed marine protected areas. While landholders may graze animals on privately owned islands outside of protected areas, their negative effects on flora and fauna at these sites remain uninvestigated and unregulated.

Efforts to remove or manage harmful invasive mammal species in other areas have proven to recover native biodiversity; however, without outreach and education on their negative effects, the likelihood of reintroductions to Grenadines islands is high. A Working Group of local stakeholders has been established to address the impacts of invasive mammals and other issues as part of the Grenadines Seabird Conservation Management Plan. With the support of communities and management agencies, reducing the negative impacts of invasive mammals is feasible.

Funding for this research was provided by the US Agency for International Development (USAID), US Fish and Wildlife Service (USFWS) and the Specially Protected Areas and Wildlife (SPAW-RAC).