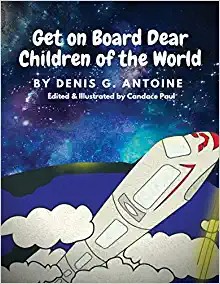 The United Nations, the Center for SDGs Global Education, libraries, and many retailers around the world have featured the book which has amplified our message.

“The message in this book is a simple truth: aimed at inspiring and inviting children to get on board as changemakers, problem solvers, and the ones that will ultimately shape the future, but it all starts with the decisions they make today. However, children are not the only ones with that responsibility. Intergenerational engagement is promoted to safeguard and make a way for the incoming generations. Thus, we all play major roles; in a collective undertaking because we are all in it together,” Antoine said.

The success of this book is due in large part to Global Partners. They are the people and organisations that understand the vision and want to provide substantial support. The books are available on Amazon.

NOW Grenada is not responsible for the opinions, statements or media content presented by contributors. In case of abuse, click here to report.
Tags: denis antoineget on board dear children of the world
Next Post