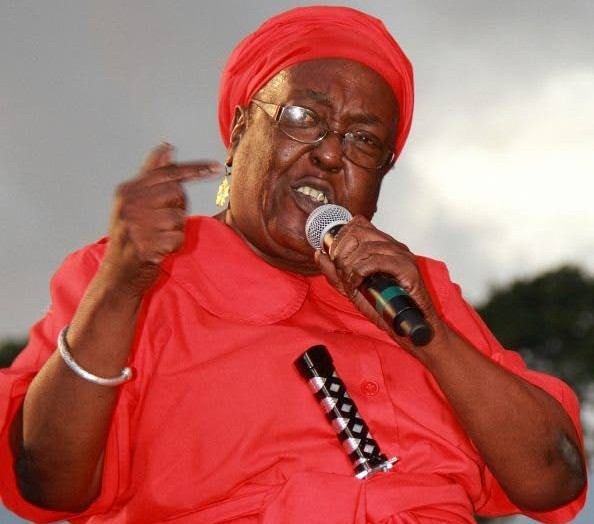 This story was posted 2 years ago
in Arts/Culture/Entertainment, OPINION/COMMENTARY, Tribute
6 min. read

Singing Sandra — what a lady! An iconic calypsonian! A staunch defender of women’s rights! A beautiful Caribbean soul! A phenomenal Caribbean woman.

The last time I saw Singing Sandra, it was 2019 at Coconut Beach restaurant situated on the world-famous Grand Anse Beach. I did not know then that it would be the last time we would be together. Coconut Beach restaurant is operated by Uncle Scratch and Aunty Pat, bona fide culture lovers. At that time, a group of calypso diehards gathered to reason. I recall that we spoke at length about Black Stalin, his expansive discography and his health.

Whenever Singing Sandra visited Grenada, she always made a lime before heading back to Trinidad and Tobago. She was proud of her Grenadian heritage and specifically her family roots grounded in the town of Gouyave.

I was introduced to Singing Sandra’s calypsoes by the legendary Grenadian broadcaster, Troy Garvey. Garvey hosted his famous Saturday morning programme dedicated solely to calypso. It was a programme for “full-time Kaiso lovers” but part-time lovers were welcome.

At that time, there was only one radio station in Grenada and, every Saturday morning, classic calypsoes from across the Caribbean region would take over the airways. It was on one of those Saturday mornings that I first heard, “The War Goes On” — a standout song from Singing Sandra’s discography. Singing Sandra reminded us that, “nobody really wins a war.” As a young boy growing up in revolutionary Grenada, I always thought that the victors always win wars. “The War Goes On” was one of my first lessons in critical thinking.

“Die with My Dignity” cemented Singing Sandra’s place as a strong supporter and defender of women’s rights — and a feminist without ever laying claim to that role. “Die with My Dignity” exposed the chronic problem of sexual harassment and exploitation in our society. A problem that is oftentimes ignored, covered up and even accepted.

Singing Sandra’s social commentary on sexual harassment was a forerunner to the Anita Hill and Clarence Thomas sexual harassment hearing in the United States. She was a woman ahead of her time and very much in tune with the social and political conditions she was witnessing at the time. Through her songs, Singing Sandra elevated and amplified a Caribbean taboo and admonished our women and girls to stand up, speak up and never compromise their self-worth — to die with their dignity. The song’s lyrics carefully described the plight of Caribbean women:

As a boy, I wondered what type of man would want to do more than the woman’s doctor or husband? Singing Sandra raised my consciousness in my childhood innocence. “Die with My Dignity” is classic kaiso music.

“Cupboard always bare and scanty;
Ten people in a one-bedroom shanty;
Forced to sell on the pavement;
No vacancies, no employment;
Can’t tell firecracker from gunshot
Blood does flow when things get hot…”

And the powerful message continues…

“Mothers does just hold their head and bawl;
And then woman stronger than a wall;
A big pusher eyeing she daughter;
Son in jail for manslaughter…”

How many Grammy-winning songs create such imagery? Written with such beauty? I would argue that only Singing Sandra could sing that song! If you’ve ever seen Singing Sandra perform that song, you would understand what I am talking about here.

Singing Sandra — a clear and powerful voice in calypso music! She is the finest exemplar of rendition and performance. Her voice intonation, the way she used her eyes, hands and body made me wonder, did she really need a voice to sing? Her body told the story. Singing Sandra mastered the art of singing and performing calypsoes.

Another of Singing Sandra’s classics is, “For Whom the Bell Tolls”. This song amplified the violence and other social ills plaguing her community. She always called a spade a spade and in “Ghetto of the Mind”, Singing Sandra addresses issues affecting poor people living in the “ghetto”. She also used that song to speak directly and forcefully to her own people. She gave them a good “piece of she mind.”

Similarly, in “Women is Their Own Worst Enemy”, she admonished her fellow sisters to be mindful of their treatment of each other. She encouraged them to support and uplift each other; and, more importantly, to look out for other women who may have lost their way. And, in “Caribbean Man Part 2”, she addresses Caribbean men — the “worthless” ones, that is. It was their turn to check themselves and do the right thing.

It is no wonder Singing Sandra was called “mother”. She was a mother to young and aspiring calypsonians — to that I can attest. She was also a cultural mother to the Calypso sorority and fraternity, as well as the broader Caribbean society. The late Singing Sandra championed strong family values and responsibilities.

Hers was a caring and loving voice — a voice of conscience and conscientiousness. Through her music, she has contributed to Ministries of Gender and Women Affairs by affirming and defending the rights of women and girls. Her legacy is in the power of her social and political message in her music.

Additionally, Singing Sandra’s message was, in many ways, inspired by her religion. She was an Orisha, a Yoruban priestess. Although, the Spiritual Baptists in Trinidad have a different origin than Spiritual Baptists in Grenada, having grown up in a Spiritual Baptist home it allowed me to understand a few things about Singing Sandra. The way she dressed — always regal. Her many different gelees or head wraps; her African attires — including flowing gowns — are all synonymous with her religion and her love for her culture and African traditions. The drums, the way she danced, the hums, groans, the deep guttural sound — all bring out the depth of her message: it was coming from deep down; her religion and culture merging to create beautiful music.

I am not sure of her vision on the “mourning ground” but, I reasonably suspect that her vision may have revealed something at least close to motherhood. The loving, caring and maternal characteristics she displayed may have been her spiritual calling.

Fondly, I remember her days as a member of the United Sisters. I vividly remember, “Whoa Donkey.” In those days, I had all the dance moves for all the hit songs. I did the “donkey dance” well — at least, I thought, I did it well. However, “Ambataila Woman” is my all-time favourite United Sisters’ song. I love that song! “Ambataila Woman” too, is a celebration of our Caribbean women.

Singing Sandra, following the footsteps of Calypso Rose, is undoubtedly a pioneer for women in the calypso industry. Calypso is still very much a male-dominated industry. Singing Sandra made a significant contribution to the art-form by opening doors for women, who are making a name for themselves in the calypso and soca industry today.

Singing Sandra, we need your vision, your voice and your message, now more than ever. We mourn for you today. You left us many valuable lessons — lessons that will last many generations. The songs and memories given to us by Singing Sandra will never die.

So, as we bid farewell to this legend of calypso music, let us celebrate her life and contributions to our society. Singing Sandra will forever live on in our hearts. Rest in power, you champion. Mother! Thanks for everything you did for us! We will always be your children. May your soul Rest in Peace.

NOW Grenada is not responsible for the opinions, statements or media content presented by contributors. In case of abuse, click here to report.
Tags: calypsocalypsoniansalimbi gillsandra desvignes-millingtonsinging sandra
Next Post