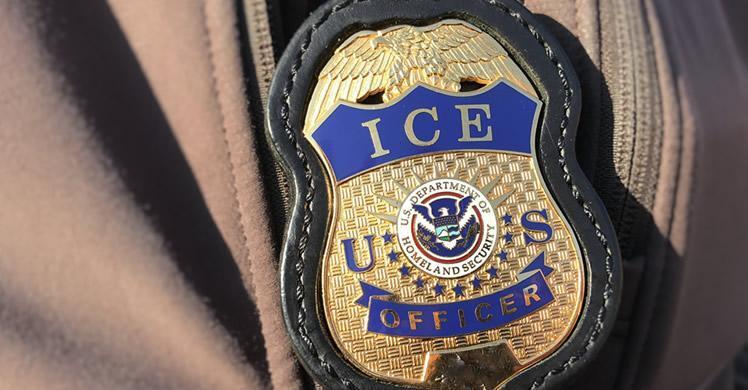 This story was posted 12 months ago
in General News
3 min. read

Badge of a US Immigration and Customs Enforcement officer
Share

6 of the 17 people deported to Grenada during 2020 were criminal deportees from the USA who were the subject of the US Immigration and Customs Enforcement (ICE) agency.

The others are from different islands within Caricom and other international partners with which Grenada has bilateral deportation agreements.

The 2020 deportations were the least number to have returned from the USA since 2018 when 9 people were deported. 13 were deported in 2018. Special permission was given to a US plane to land at the Maurice Bishop International Airport (MBIA) when 2 of the 2020 deportees arrived in May.

Special permission had to be given because at the time the country’s ports of entry were closed because of lockdown measures enforced by Government as part of its strategy to contain and control the spread Covid-19.

An ICE removal is the compulsory and confirmed movement of an inadmissible or deportable alien out of the United States. Immigration and Customs Enforcement (ICE) Enforcement and Removal Operations (ERO) shares responsibility for administering and enforcing the nation’s immigration laws with ICE Homeland Security Investigations (HSI), as well as other Department of Homeland Security (DHS) component agencies, including US Customs and Border Protection (CBP) and US Citizenship and Immigration Services (USCIS).

ICE ERO is responsible for protecting the homeland through the arrest, detention, and removal of aliens who undermine public safety or the integrity of United States immigration laws, and its main areas of focus are interior enforcement operations, management of the agency’s detained population nationwide, and repatriation of aliens who have received a final order of removal. The removals include both aliens arrested by ICE ERO in the interior of the country and aliens who are apprehended by CBP and subsequently turned over to ICE ERO for removal.

All persons deported to Grenada are required to register with the police under Grenada’s Deportation Registration Act which came into effect on 31 October 2003. The legislation requires the Royal Grenada Police Force (RGPF) to have a registry of all deportees. Some can be designated as restricted persons “once the Minister for National Security may, by order, upon application by the Commissioner and upon being satisfied that it is necessary to do so in the interest of public safety or public order.”

The Ministry of National Security has also confirmed that Grenada deported 9 persons during the year 2020.

NOW Grenada is not responsible for the opinions, statements or media content presented by contributors. In case of abuse, click here to report.
Tags: deporteesenforcement and removal operationseroiceimmigration and customs enforcementlinda straker
Next Post