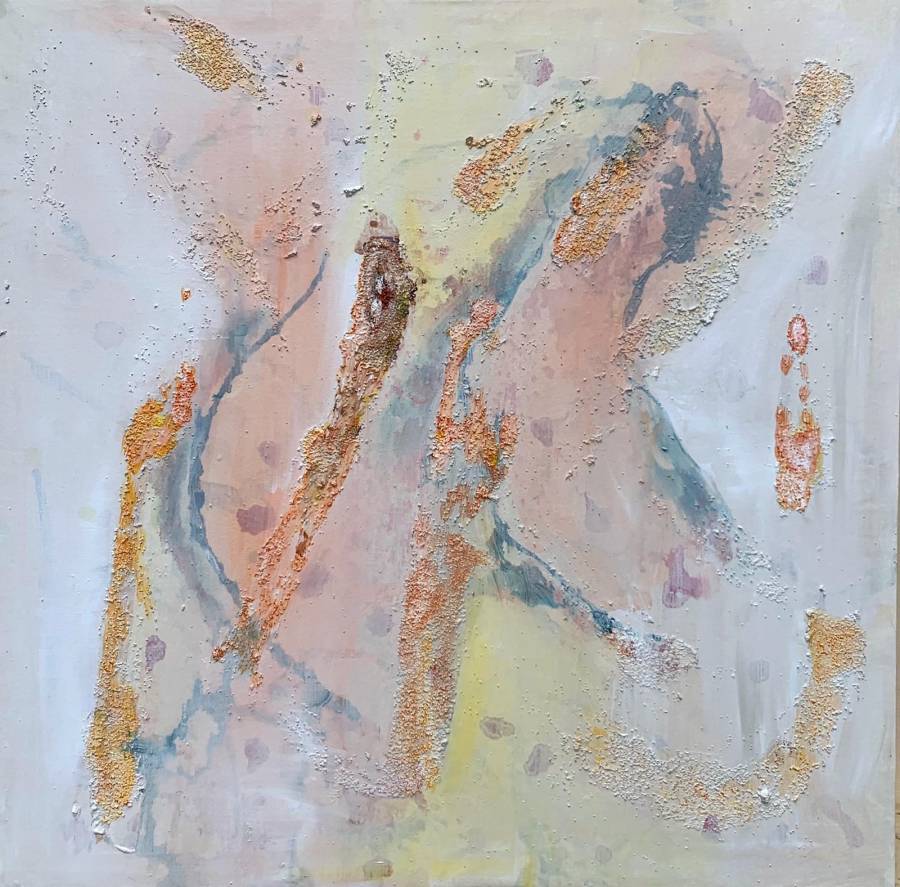 This story was posted 1 year ago
in Arts/Culture/Entertainment, PRESS RELEASE
4 min. read

by Dr Susan Mains, past instructor of Visual Art at SGU

When art carries history forward, the result can be arresting. Dr Oliver Benoit, sociologist and professor at St George’s University (SGU) in the School of Arts and Sciences for some 15 years is one of those artists whose work is never easy.

While visually compelling, his abstractions on canvas often cover the intended meaning in many layers of media. The late art critic Richard Buchanan of Art Grenada would say of Benoit, “He obfuscates.” Once you have become familiar with his style, his work is easy to pick out in an array — as much as he tries to make his own identity the least important part of his expression, it clearly asserts itself.

As a sociologist/artist Benoit never works alone. He often includes his SGU students in his research and also in the production of his work. He views it as an opportunity to educate, to expose them to different ways of thinking and communicating.

Over the past few years, Benoit has extended his painting practice to include installations, which further enhance the effectiveness of the communication in his work. In 2017 at the Grenada Contemporary Exhibition he offered a sound installation that was reminiscent of a religious confessional booth. When the viewer stepped inside the darkened structure, instead of confessing their sins, they listened to the voices of women speaking about their own trauma of childhood sexual abuse. The close confines further added to the level of discomfort experienced. It was disturbing — many came out with tears in their eyes. It was true — these were the actual experiences of real people.

The Grenada Revolution has been an underlying theme of Benoit’s work almost from the beginning. On 12 March 2020, he opened an exhibition at Art House 473, a newly established venue for contemporary art in Grenada. This was an all-encompassing work of paintings and sound that Benoit had spent 2 years completing. The many abstract paintings filled the room, and as the viewer passed them, the voices and stories of people’s own experiences formed a cacophony of sound. It was confusing (much like the end of the revolution itself)—one had to lean in closely to hear individual voices. The emotion in the recorded voices provided a history that had the personal imbedded. This was no dry reading of a chequered history, this was real and raw.

The paintings at first glance were deceptively sweet. Soft pastel colours punctuated by surface texture — without closer inspection, one could have imagined them hanging as pretty decor in one of the new “foreign investor” hotels that are now dominating the tourism scene in Grenada.

Upon closer inspection, one could see words inscribed in the texture — words that were some of the slogans of the Revo. Tiny streams of red paint became the blood that was shed, and the visual disorientation the crushed dreams of a people who only wanted better for their country.

Sadly, the opening day of the exhibition was also the last day, for Grenada had just started its shutdown due to the worldwide pandemic of 2020. SGU was preparing to send its non-national students to their respective countries. It happened quickly, and art was and is, at the lowest rung of the ladder of things to be concerned about.

Hopefully at some time in the future, when we can once again congregate, the installation could be put up again, to allow more people to interact and learn of Grenada’s history. Ideally, this would first happen on the SGU campus, so the students of the School of Arts and Sciences, as well as the Vet and Med School, could easily access this very important, landmark work of art.

SGU is truly fortunate to have this socially engaged artist interacting with the students. His art practice strengthens both the documentation of history and culture as well as critical thinking in the community. It is academic research in its purest form, and indeed makes an indelible imprint.