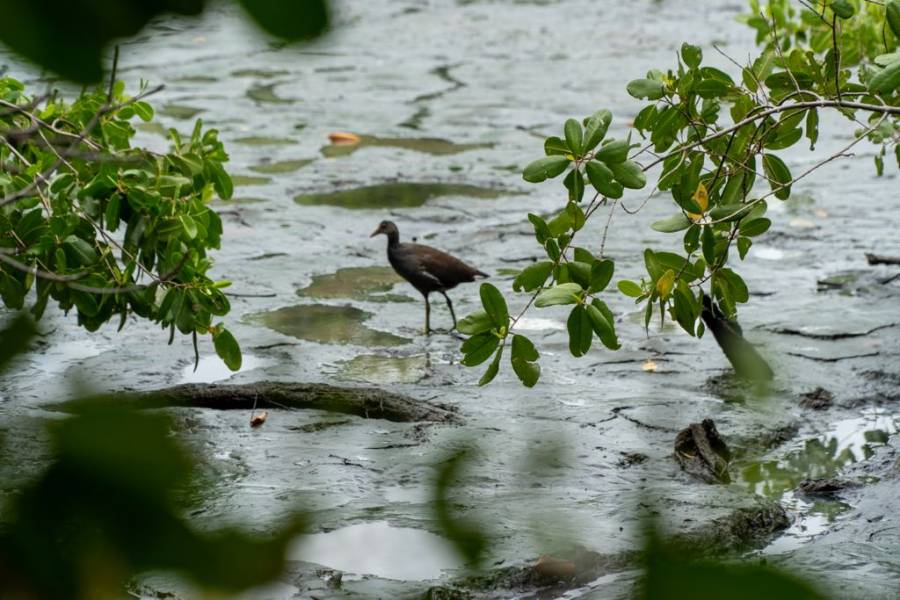 This story was posted 9 months ago
in Environment
5 min. read

Increased predator presence in wetlands areas threatens migratory bird populations. This comes as a consequence of continued human activities, which can have unforeseen consequences if left unchecked.

Invasive predators like the Small Indian mongoose (Herpestes auropunctatus) and Brown rats (Rattus norvegicus) have been seen in and around wetlands in Levera and Mt Hartman with increased frequency. A predator introduced to a new ecosystem — by accident or deliberately — can offset the natural balance of organisms that provide sustenance to each other by destroying native plants, eat native animal populations and introduce diseases. They often eradicate native birds and mammals as they are more proficient predators.

As part of her honour’s thesis, Marine & Wildlife student Brittney St Clair looked at the occurrence of these mammalian predators in Mt Hartman and Levera. Marissa Cornwall, a student in St Clair’s programme who also completed her honour’s thesis, conducted similar work at a significant wetlands in Conference, St Andrew.

St Clair explained that migratory birds inhabiting the wetlands act as a bio-indicator of the ecological stability of these areas, and they influence nutrient dynamics of mangroves by aiding in their pollination. These birds are being affected by these invasive species and must be protected. The mongoose and rats prey on almost every bird species that inhabit these wetlands, including species like the Grenada Flycatcher, Lesser Antillean Bullfinch, and Yellow-bellied Seedeater.

Assisted by a team of researchers, St Clair over 2 weeks, used non-intrusive camera traps to collect data in Mt Hartman, Levera, and Conference and identified threats linked to declining bird populations. “There were both similarities and differences observed at the three sites in regards to predator presence. At these sites, the probability of observing predators was 100%. Also, the majority of the predators observed were within the plots that (i) were closer to the edge of the wetlands; (ii) experienced higher levels of human activities, and (iii) experienced less flooding. St Clair observed rats and mongoose at both sites; cats present in Mt Hartman and dogs in Levera. In Conference, Cornwall observed only rats.

One of St Clair’s supervisors on this research, Dr Jody Daniel of Gaea Conservation Network, added that “Brittney and Marissa’s findings confirm what was already suspected based on the scientific literature – the loss of native vegetation puts birds at greater risk to predation in wetlands.” Dr Daniel stated the leading cause of bird mortality worldwide, especially in the nesting stage, is predation, with cats and mongoose as one of the largest offenders. “So, even if the core wetlands is intact, removing the vegetation around the wetlands leaves both our migrating and native birds at a greater risk to predation.”

From the perspective of the Vector Control Unit, the increase in the rat population and the spike in their sightings have been attributed to the disruption of surveillance and control methods, as a result of the coronavirus lockdown quarantine measures taken last year.

Senior Environmental Health Officer, Kenny James explained that as a result of coronavirus lockdowns and quarantine measures, “rodents have capitalised on the opportunity to increase their numbers due to the inactivity of the Vector Control Unit.” Similarly, pest control experts globally have linked the slowdown of human activity during the height of the Covid-19 pandemic to a spike in rat populations. Rats are heavily dependent on leftovers and discarded food waste from humans. During the Covid-19 lockdowns, inactivity resulted in a reduction in food waste that forced rats to venture further to find food.

James added that in Grenada, improper waste disposal, fruits left to spoil, vacant buildings, and reduced regular cleaning cycles of farm areas have created enabling environments for increased rodent reproduction. “Our [Vector Control Unit] effort is [focused on] control. We try to reduce the [rat] population, and if we are unable to do that at any given time, that will create a spike in terms of the population.”

James said prior to the lockdowns, the Vector Control Unit successfully controlled the rodent populations within the town of St George’s through their baiting programme. Key successes noted were the fish market on Melville Street and Market Square, which once housed derelict buildings (now demolished) that made managing it difficult. James explained that while most of the Vector Control Unit’s efforts to curb rodent populations have been focused on in urban communities, as it is more cost-effective, there is a need for persons from rural communities to play an active role in managing the rodent population. “Sanitation helps to reduce the availability of food for rodents because you dispose of your garbage properly, thereby cutting off their [rats] food supply. Constant de-bushing of your surroundings will also help to eliminate places where they can reproduce.”

St Clair plans to repeat the study and include more sites and for a more extended period to better understand if there is a change between seasons. Her recommendations after conducting this research are that (i) existing legislation needs updating to reduce loopholes for developers to practice unsustainable development since tourism and development-related disturbances tend to increase predator occurrence and their range within wetlands; (ii) increase enforcement to ensure persons adhere to these legislations, and (iii) increase community outreach aimed at educating the general public on the importance of these habitats and migratory birds, and how their actions, i.e. dumping, littering, unsustainable agricultural practices, within close proximity to the wetlands can contribute to its degradation.

While further research is needed to understand the effects of bird-derived nutrients on mangrove growth rates, and the mangrove’s association with fisheries, mangrove protection is of utmost importance in maintaining healthy biodiversity.

“There is little to no prior data or research on this issue locally, which is why my research is important as it will act as a baseline. We need to know this information because it can be used by our Forestry Department and other environmental organisations to advise their management plans aimed at improving habitat for Grenada’s birdlife, especially migratory birds,” St Clair said.