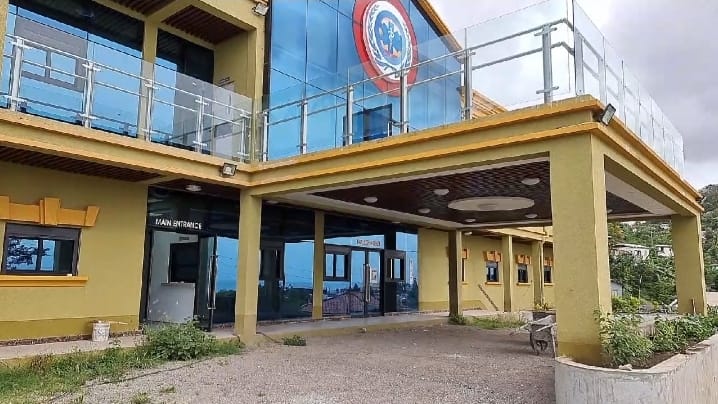 The building that will house the flagship, ultra-modern Gouyave Health Centre is now complete and it is anticipated that the facility will become operational in the next few months.

The new facility, constructed at the foot of Dr Belle in Gouyave, St John, boasts of diagnostic services such as x-ray, ultrasound and laboratory, pharmacy, dental, maternity, theatre, and an observation room for patients, to complement a host of other medical and public health services.

Senior health officials including the Minister for Health and Social Security Hon. Nickolas Steele as well as the project’s architect and contractors, toured the facility last week.

An excited Minister Steele expressed satisfaction with the work done and welcomed the completion of the facility, despite the setbacks brought on by the Covid-19 pandemic.

Minister Steele who described his visit as fulfilling, noted that with just minor work to be done, he is optimistically looking forward to the handover of the building within the next 3 months, followed by the occupation process. He said the Gouyave Health Centre is the first climate-smart health facility to be constructed on island from design upwards, while others like the Hillsborough Health Centre and Princess Alice and Princess Royal Hospitals, were retrofitted to be climate-resilient.

The new facility represents a significant level of investment with respect to primary healthcare. Minister Steele said the building speaks for itself in terms of the amount of time, thought and effort that went into having what he called the first polyclinic on island. He is confident that it will make a tremendous difference with respect to the delivery of primary health care services and addressing minor triage emergencies for the entire western corridor.

Lorna Charles the Grenadian architect who oversaw the design and construction of the facility said they have accomplished their goal, which was to provide a smart facility that has green architecture, natural lighting and is capable of withstanding natural disasters. Charles who is employed at the Ministry of Infrastructure Development, Public Utilities, Transport, and Implementation, said the Gouyave Health Centre is the most modern public facility on island. “We have incorporated modern building materials and technology in this medical facility never before used on the island of Grenada,” she explained.

Like Minister Steele, the female Grenadian architect is also hopeful that the facility would be operational before year end, and she identified parking lots, security and data systems as the only things left to be done.

NOW Grenada is not responsible for the opinions, statements or media content presented by contributors. In case of abuse, click here to report.
Tags: gouyavegouyave health centrelorna charlesnickolas steele
Next Post