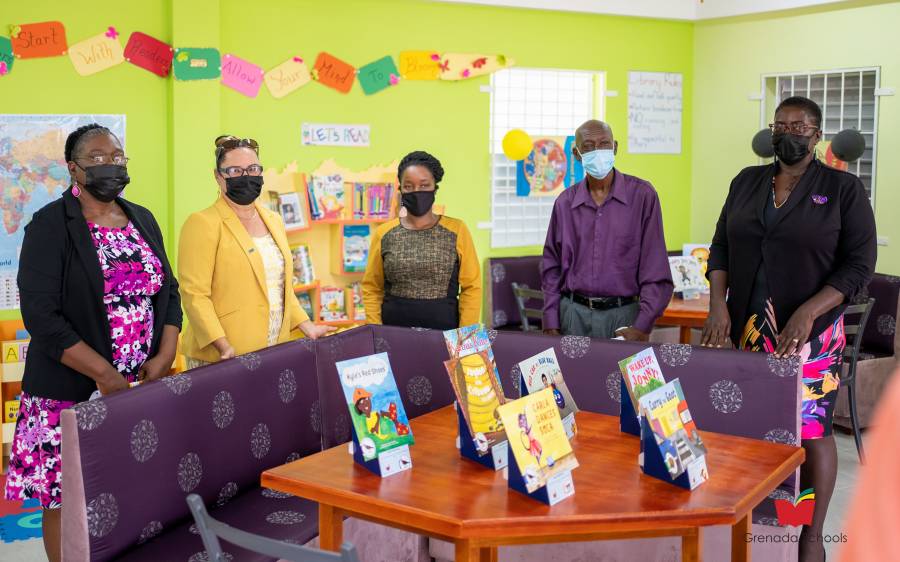 Harvey Vale and Hillsborough Government Schools in Carriacou officially opened the doors to their brand new libraries on Friday, 23 April 2021.

The 2 primary schools were the first to receive new libraries from GND Schools Incorporated (GSI) since the organisation resumed the rollout of its library development initiative. This is following a closure from March–October 2020 due to the impact of Covid-19.

The library at Harvey Vale Government School was accepted by Principal Thereia Lendore during the official handing over ceremony. She thanked GSI for the thoughtful gift, which she said will help the school to achieve its existing pledge, to develop good readers. Representing the Ministry of Carriacou and Petite Martinique Affairs, Senior Administrative Officer, Dr Vernesta Noel Smart, endorsed GSI’s initiative. She expressed that the new library will present an opportunity to foster a knowledge-driven community.

During the official handing over ceremony of the Hillsborough Government School Library, Principal Barbara Charles praised GSI for the addition of the valuable resource which she believes will become the cornerstone of the community and the surrounding villages.

District Education Officer for Carriacou and Petite Martinique Rosalina Lendore spoke at both launches. She extended heartfelt appreciation to GSI for its partnership with the Ministry of Education and for investing in the future of the nation’s children. Also applauding the efforts of GSI was Rholda Quamina Permanent Secretary in the Ministry of Carriacou and Petite Martinique Affairs. In her remarks on behalf of GSI, Denyse Brathwaite expressed well wishes from Chief Executive Officer at GSI Andrea Phillip who unfortunately, was unable to attend the events.

Recognition was also given to supporting donors, Dan and Jane Lazenby of the United Kingdom. They donated £20,000 which was used towards the Harvey Vale and Hillsborough Government School Library Projects.

The Library Development Programme is part of GSI’s continuing thrust to enhance the literacy development of the nation’s primary school students. This is being accomplished through its “BIG Vision” of Building Libraries, Increasing Educational Achievement and Growing Learners.

GND Schools Inc. is collaborating with the Government of Grenada, through the Ministry of Education, Human Resource Development, Religious Affairs & Information. Support is given by main donors Michael and Melanie Sherwood of the United Kingdom along with local trustees Leo Garbutt of the Calabash Hotel, Lyden Ramdhanny and Jason Roberts.