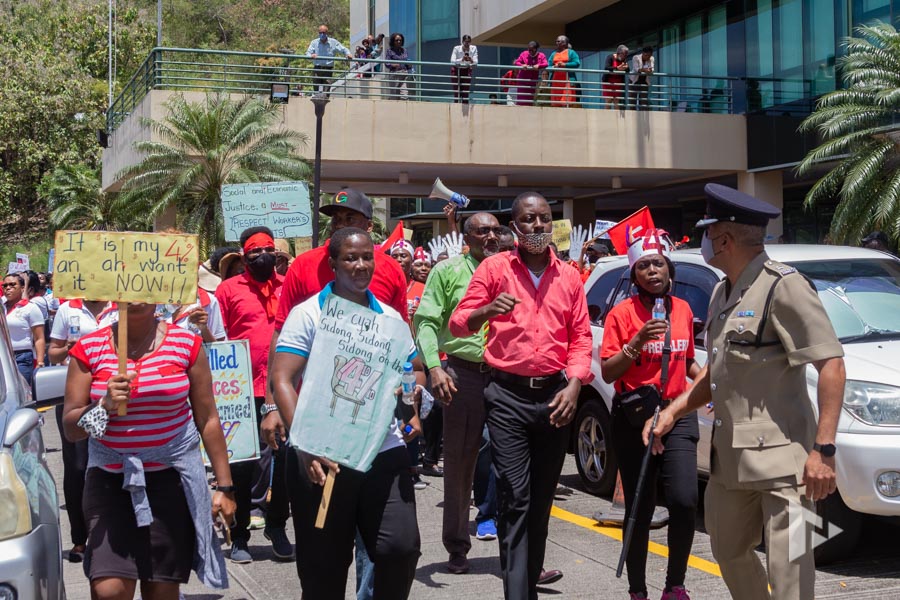 Jude Bartholomew, recently elected President of the Grenada Union of Teachers (GUT), said that he was not arrested last Saturday by the Police. He was questioned in relation to breaches allegedly committed by the Union and its members during the industrial protest marches/walks that occurred in April.

“I was not arrested; at no time was I under duress,” Bartholomew said during a news conference called by the GUT on Monday.

On Saturday evening, news broke that he was detained and arrested by law enforcement officials from the Criminal Investigating Department (CID), and was being questioned at the St David’s Police Station.

In a news conference called on Monday morning, the Police explained to the media that Bartholomew was interrogated about violations of the Covid-19 regulations under the Emergency Powers Act and that he was not arrested.

The Covid-19 regulations clearly state that “no person shall host or attend any event or gathering of any description except,” without permission from the relevant authorities. The Police are contending that the Union was never issued with formal permission from the Police nor the Covid Advisory Committee through the office of the Chief Medical Officer.

“Mr Jude Bartholomew was asked to come into the police station pursuant to the noncompliance of Covid-19 regulations, because if you are an organiser of an event there are certain expectations with how this whole matter will progress,” said Deputy Commissioner of Police Franklin Redhead. He explained that the Union has hosted 3 events during the month of April without receiving written permission from the Police nor the Covid Advisory Committee.

Each event appears to be an accommodation from the Police.

Immediately following the first protest which was held on 7 April in which the traffic department and other departments of the RGPF accommodated the march, the Union’s leader was spoken with and the process for obtaining permission was explained. Marvin Andall at the time did confirm that the Union had violated the permission granted.

Two other discussion sessions were undertaken with the leadership of the GUT and Bartholomew, but no formal request was made to host the protest which is intertwined between being called a ‘walk’ and a ‘march.’

Redhead said, “In spite of those 3 interventions… we are disappointed with how the story has unfolded with some saying that the RGPF is on a path where people expressions are suppressed or violations of their rights are suppressed. This is totally false. We have been very patient; we have asked for forbearance.”

“We are in no position — and I want to state so very clearly — that we are in no position to prevent anybody from having their say or prevent anyone from exercising their democratic rights. However, these are not conventional times, and we have to ensure that within the frame of expressing those rights, we do not cause other rights to be violated as well, because we all live in a small society and everything is connected. What happens to one part of the system will naturally affect other parts of the system as well,” Redhead said.

The GUT and other unions representing public servants are in deadlock discussion over a 4% increase in salary which had to go into effect as of 1 January 2021. The government said it is unable to pay because of the slowdown in the economy but the Unions are demanding the payment and began industrial protest as of 1 February 2021.

The industrial action in the form of walks, marches and vigils have increased over the past 6 weeks, but because Grenada is under a state of emergency as part of its Covid-19 control strategy and the Emergency Power Act is enforced, the regulations explain that anyone organising a social gathering event must receive permission.

NOW Grenada is not responsible for the opinions, statements or media content presented by contributors. In case of abuse, click here to report.
Tags: coronaviruscovid-19emergency powers actgrenada union of teachersgutjude bartholomewlinda strakerpoliceprotestregulations
Next Post