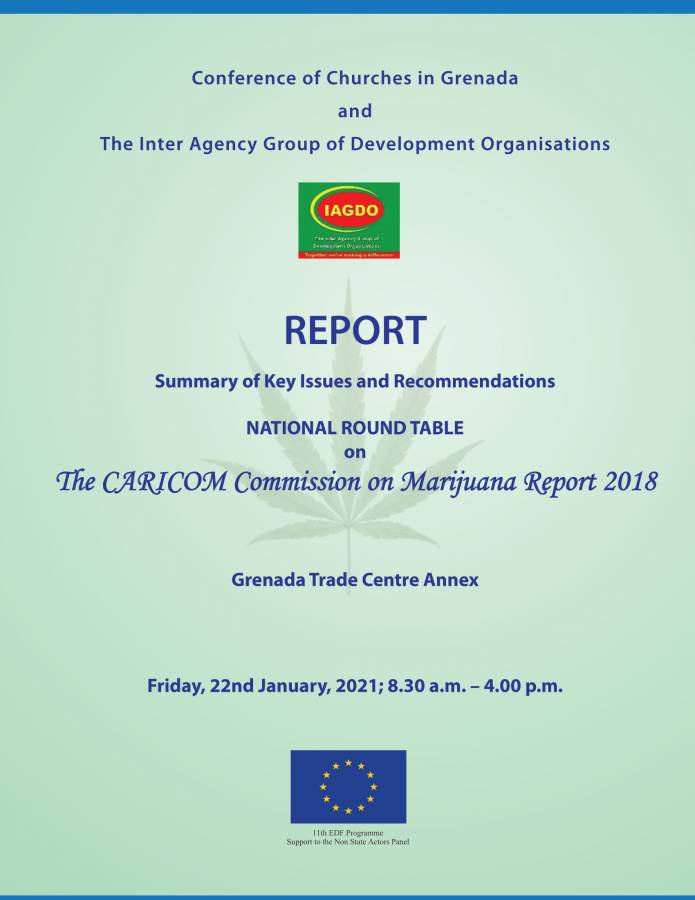 The Conference of Churches in Grenada (CCG) and the Inter Agency Group of Development Organisations (IAGDO), in collaboration with the Non State Actors Panel, hosted a National Round Table on the Caricom Regional Commission on Marijuana Report 2018 on Friday, 22 January 2021.

The National Round Table was undertaken in the context of announcements by government officials — Prime Minister Dr the Rt. Hon. Keith Mitchell and Hon. Peter David, recently reassigned to the Ministry of Agriculture — that Grenada would be undertaking consultations on the decriminalisation of marijuana. At a town hall meeting, Prime Minister Mitchell also advised that Government had “established a committee locally to review the Caricom Marijuana Commission Report that will guide the country to set the framework for moving forward with the recommendations.”

National consultations with the Caricom Commission were not accommodated by Grenada in 2018 due to its imminent general elections. While the Commission’s Report was launched since July 2018, the Report had not been publicised in Grenada nor had discussion and engagement taken place in respect of the findings and recommendations of the report. It was within this context that Inter Agency Group of Development Organisations proposed a National Round Table as a contribution to dialogue and informed, inclusive discussions on the Report. The IAGDO approached the Conference of Churches in Grenada to partner on the initiative and also solicited the support of the Non State Actors Panel. A positive response was obtained from both entities.

NOW Grenada is not responsible for the opinions, statements or media content presented by contributors. In case of abuse, click here to report.
Tags: caricomccgconference of churchesiagdointer agency group of development organisationskeith mitchellpeter davidregional commission on marijuana report
Next Post