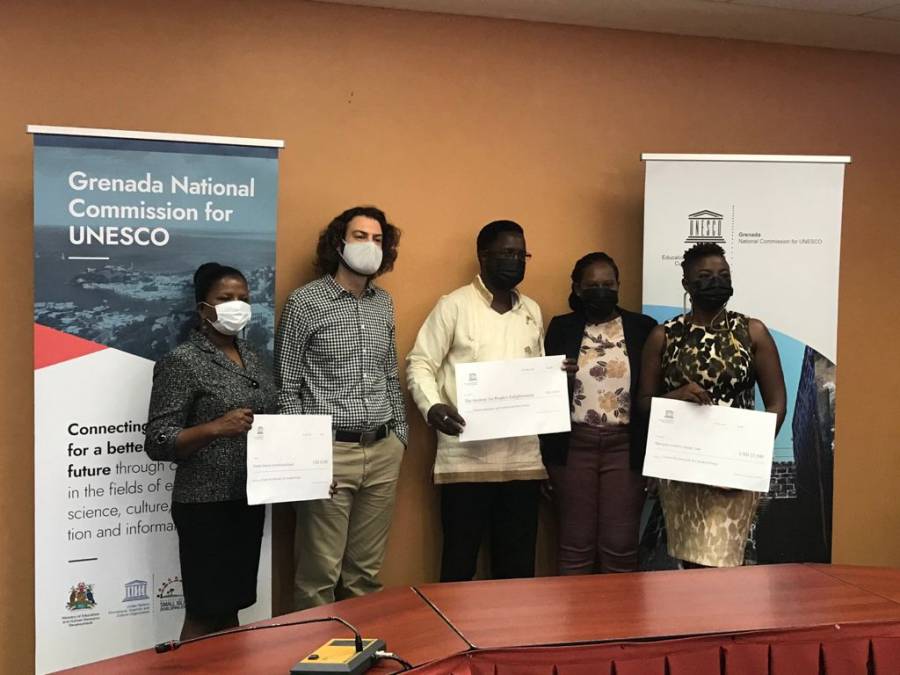 3 projects were recently awarded grant funds under the 2020–2021 UNESCO Participation Programme for projects that they developed, related to UNESCO’s core activities in education and culture.

Kisha Gellineau, Secretary-General, Grenada National Commission for UNESCO said, “The participation programme functions as a vital complement to UNESCO’s regular activities, by assisting with, and facilitating the implementation of national projects submitted by member states and NGOs, directly related to the activities of UNESCO, and which provides support to the benefit of all.”

Permanent Secretary with responsibility for Human Resource Development Norman Gilbert thanked UNESCO, at the award ceremony saying, “We must, of course, commend the support of UNESCO, through our local secretary-general national commission’s office, based at the Ministry of Education, for the work done to ensure that these persons are able to receive their funding.”

Simon Green Director of the Institute for People’s Enlightenment (IPE) and Jonathan Hanna PhD Lead Archaeologist of the Grenada Public Archaeology Network (GPAN) and Curator of the Grenada National Museum will implement the project titled Grenada Public Archaeology Network (GPAN) Establishment and Training, under the Institute for People’s Enlightenment. They received funding in the amount of US$13,830 from UNESCO.

Green said, “I would like to express our gratitude to UNESCO for this grant and also for having the vision and also for their passion.”

Hanna explained that there are several Amerindian sites to be explored and artefacts to be preserved, with an immediate focus on the Sauteurs bay. He said, “The area around Mt Craven and Mt Rodney has been heavily eroded. Many know, or maybe do not know, that there is a massive archaeological site there and there has been lots of burials falling into the sea, eroding into the sea. We’ve collected 40 individual human burials just in the last 2 years and then there were about 20 collected in another project in the 90s. So, we have about 60 burials from the site — all Amerindian — and there’s more eroding into the sea, as we speak, right now, every day. The site is very important. The radiocarbon dates start around 600 AD.” Hanna said this period continued until the Leapers Hill incident in 1650, marking 1,000 years of occupation for Amerindians at this site. The project will help to build public archaeology networks within the communities to engage locals in protecting and preserving these precious archaeological finds.

Gilbert expressed his support of this initiative, saying, “We expect that the Grenada Public Archaeology Network would be able to bring significant training and capacity development to our Grenadian people, so that we can be able to preserve our heritage.”

Shirleen Robertson, research officer at the Grenada National Accreditation Board received US$24,500 funding for her project, Developing a Qualification Framework for Grenada. “GNAB is extremely grateful to UNESCO and all the persons who have been instrumental in obtaining this grant under the UNESCO participation programme,” Robertson said. “A qualification framework is an instrument for the development and classification of qualifications, according to a set of criteria for levels of learning that would have been achieved.”

Robertson said this will make clearer, to both employer and employee, what tasks someone with a particular qualification can do. It will link Technical and Vocational Education and Training (TVET) to the general education system and also allow individuals with prior learning experience to be certified, continue their education or seek better job opportunities. Gilbert noted this as a critical move and noted the Ministry of Education’s support for the formulation of this national qualifications framework.

Yuri Peshkof programme specialist for culture at the UNESCO Kingston Cluster Office for the Caribbean detailed UNESCO’s focus in this endeavour. “The UNESCO Cluster Office for the Caribbean seeks to build peace through the international cooperation in education, social sciences, natural sciences, culture and communication,” he said. “We have a mandate to operate with 20 Caribbean Small Island Developing States.”

Peshkof also expressed his pleasure regarding recent grant awards, saying, “I am thankful for the fruitful collaboration with the national commission of Grenada for UNESCO.”