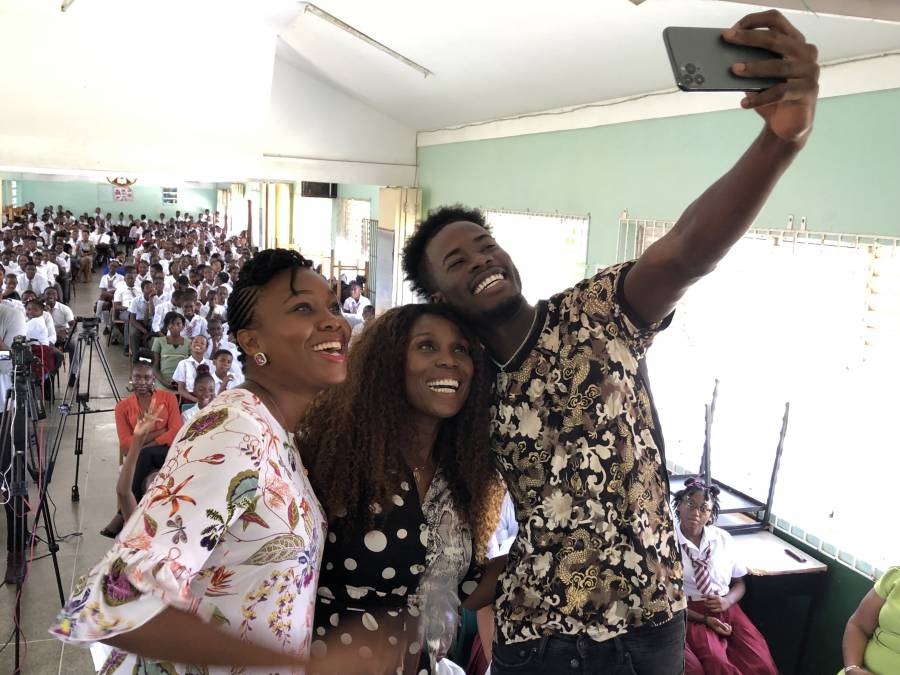 This story was posted 12 months ago
in Arts/Culture/Entertainment, Business, Education, Youth
4 min. read

Accompanied by Jevaughn “V’ghn” John (one half of Grenada’s Groovy King of Soca), Noel-Schure definitely made an impact upon students, imploring them to dream big despite their current predicament and to have their vision of a successful career in the entertainment industry that extends beyond the shores of Grenada. “There are a thousand careers behind an entertainer… there is management, there is marketing, publicity, touring and content creating. So, if you are not the best singer or dancer in the world, you can still have an amazing career in the entertainment business,” she said.

A former student of St Joseph’s Convent, Grenville, Noel-Schure knows the hardship faced by students. She endured being overlooked and bullied for her appearance and accent especially after migrating to the United States. She recalled that in the moment of her redemption, she found courage and acceptance of her identity to be able to triumph. “It was in the bullying process that I decided that I was not only going to stand up for myself but that I was going to stand up for every girl and boy that looked like me and sounded like me. I was going to stand up for every migrant that got to America that was pushed aside,” she said.

Noel-Schure related her experience of having to care for her mother who suffered from bipolar disorder and died in 2016. The students also got insight into the amount of dedication and hard work it took for her to be able to be recognised as among the world’s leading celebrity publicists. She worked with some of the biggest names in the business like Beyoncé, Prince, John Legend, and Chloe x Halle, and her own company, Schure Media Group, is an independent public relations agency that represents a diverse roster of musical and other entertainment talent and companies.

Noel-Schure recently received an honorary doctorate of humane letters honoris causa from St Peter’s University at their 128th commencement. Dr Noel-Schure believes that through attaining a proper education, students will be able to have the same opportunity that was afforded to her. It was at this moment that the celebrity publicist announced that she will afford that same opportunity to a successful student from Mac Donald College. Through the Oxford Advanced Study Programmes, Dr Noel-Schure promised that one student who exemplifies leadership qualities and a knack for learning, will travel to London for a chance to be included in Oxford’s summer programme. The programme offers high school students the unique opportunity to experience life in a historic Oxford college, including cultural visits to heritage sites, sightseeing visits to London and explore the campus with new friends.

She explained that Mac Donald College must first start by selecting their top 10 students based on their academic performance, after which they will then be further narrowed down based on certain criteria until one student is selected to represent the school. “That one student will be entered into my picks for Oxford. I will recommend that they get to Oxford first for the programme which is usually a summer programme where you learn your way around and then it very possible that you can study at Oxford University,” Dr Noel-Schure said.

V’ghn, a past pupil of St Mark’s Secondary School, addressed students at his former school on his life journey towards attaining success in the local music industry. He also spoke of the challenges he faced coming from a small community in Victoria, St Mark, and the daily struggles he witnessed his mother undergo to ensure that he got an education. He too encouraged students to work hard and chase their goals in life relentlessly.

Consulting Actuary Shontelle McGuire is the brainchild behind the staging of career days for students, and has so far worked with 4 schools including St David RC School and St Paul’s Government School. She was inspired by her interactions with students, where she observed that they are not being exposed to non-traditional career paths. She believes that schools must continue to take a creative approach to career counselling and through career days, students can get to hear from movers and shakers currently working in diverse unconventional career fields.

As someone whose career involves the measurement and management of risks and uncertainty for financial and insurance companies, McGuire understands the seriousness of this situation and is working to correct it. “I want to bring that type of awareness to students from an earlier age so people can open their eyes to what they could possibly do, to learn about what people do on a daily basis, what skill sets they have and what drives them, so that the motive behind the initiative,” she said.

Principal of Mac Donald College Carl Andall was rather pleased with the outcome of Tuesday’s career day. “My perspective on education is that every child has some talent or skill within them and I think it is time to get away from the conventional occupations so I think it is a wonderful opportunity and I will always support it,” he said.