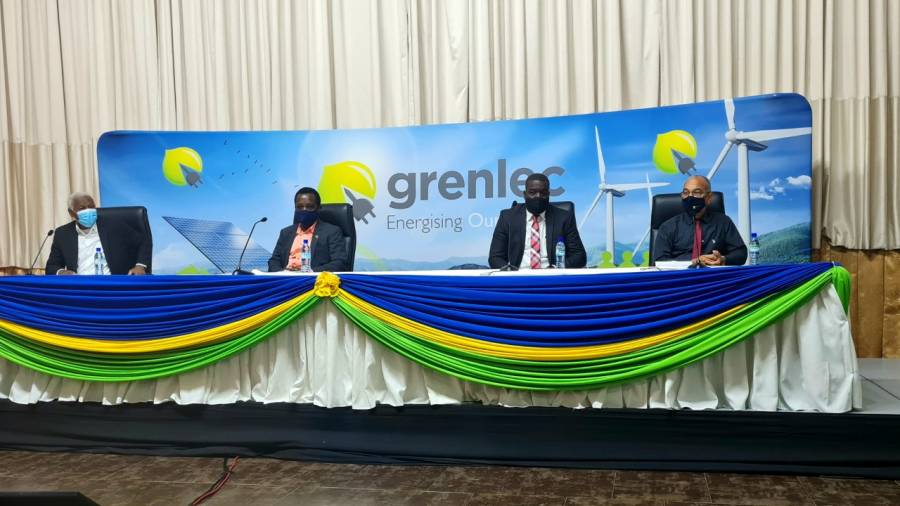 This story was posted 12 months ago
in Business, PRESS RELEASE
4 min. read

Dr Mitchell acknowledged the historic nature of Wednesday’s meeting in his remarks noting that in his 36 years of involvement in politics, this is the first occasion that such a meeting has taken place and he thanked the company’s management for arranging it.

The Prime Minister commended the workers for their stellar service over the years. He said, “Historically Grenlec employees have demonstrated that they are some of the most productive workers in the country. There is no doubt that the company has been successful and it is the workers who are responsible for the strength of the company today.vDr Mitchell noted too, “The Cuban workers, when they came after Hurricane Ivan, said some of the best electricity workers they have encountered are those from Grenada. Former Cuban President, the late Fidel Castro echoed that sentiment and you know the Cubans would not give that kind of credit lightly. The people of Montserrat too, will never forget the service you gave. In the aftermath of disaster, you are often called upon and that is based on the quality of personnel in the company.”

The Prime Minister identified some of the former Grenlec stalwarts including Bruce Bain and the late Wilfred Hayes, who both gave 50-years of service to the company; the late Raymond “Barrel” Lewis, a long-serving linesman and supervisor; the late Kenneth Edwards and Randolph Greenidge.

Dr Mitchell referenced the tremendous success of the rural electrification programme which was undertaken prior to the privatisation of the company and which resulted in a dramatic increase in the number of households which had access to electricity.

Since the Government repurchased majority shares in the electricity company, there have been concerns about job security and it was one of the discussion points at the meeting. Dr Mitchell gave assurances that here are no plans to change the status of workers. He said, “If we are convinced that these are some of the best workers in the country, it would not be in anyone’s best interest to change that.”

Energy Minister, Honourable Gregory Bowen, who previously held the portfolio of Public Utilities and was a former General Manager of Grenlec, was also high in praise for the workers at the electricity company. He made reference to the new energy environment, which places more emphasis on renewable energy. He said, “We have to be forward thinking in our approach and prepare ourselves for what’s to come. There will come a time when financing will be totally removed from fossil fuel and we will not be able to finance a diesel generated plant. The country could also be ostracised for not following international guidance as it relates to energy sector and the impact on the environment. We are operating in a new energy environment and we must work collectively towards the common goal of saving the planet.”

With an increasing emphasis on renewable energy, coupled with Government’s commitment to lowering the cost of electricity, there is concern about the potential impact of that on Grenlec’s finances. Though he affirmed that alternative energy will be the order of the day, along with cheaper electricity rates, the Prime Minister said it’s a fallacy that the salaries of workers would be negatively impacted.

The Prime Minister likened the situation to regional transportation, noting that if the cost of air travel went down, more people would travel, therefore the reduction in the cost per ticket would be offset by the increase in volume.

Dr Mitchell stated, “Similarly with electricity, as cheaper service becomes available, there will be more investment and expansion in various sectors including manufacturing, hotel and general business. So the cost will go down for individual users but the company will maintain its earnings because there will be more users. One of the key considerations going forward, will be ensuring that the company remains viable, we will not do anything to affect that.”

Senator Norland Cox who has current responsibility for Public Utilities, also addressed the workers, saying the company continues to play a critical role in the history and development of Grenada.

Minister Cox said, “The work ethic, professionalism, skills and talent of the workers continue to be widely recognised. Great opportunities lie ahead as the world continues to evolve. There will always be challenges, but working together, we can ensure that the desired results are achieved. I expect that we will have a strong and productive working relationship going forward.”

NOW Grenada is not responsible for the opinions, statements or media content presented by contributors. In case of abuse, click here to report.
Tags: gisgregory bowengrenada electricity services limitedgrenleckeith mitchellnorland cox
Next Post