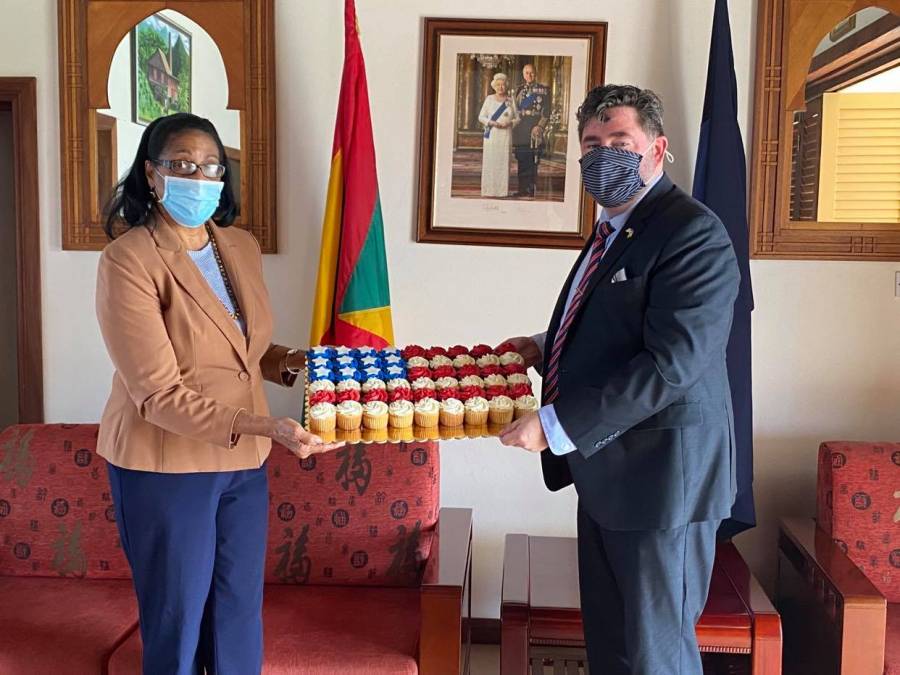 This story was posted 12 months ago
in Politics, PRESS RELEASE
1 min. read

Principal Officer Karl Duckworth paid a visit to Her Excellency Dame Cecile La Grenade Governor-General of Grenada to convey the best wishes of the American people on the 245th anniversary of their independence from Great Britain.

“The 4th of July is not only a celebration of our independence; it is a recognition of our shared democratic values of individual rights and equal justice under law,” said Principal Officer Duckworth. “The recent inclusion of Juneteenth among American holidays acknowledges that the right to ‘life, liberty, and the pursuit of happiness’ is fundamental to all people, and we value the partnership of the Grenadian people in working toward that goal.”

Principal Officer Duckworth shared that the United States is on track to complete the new emergency operations centre (EOC) and warehouse in Morne Jaloux and sister EOC in Carriacou this year, thanks to the US$6 million investment by US Southern Command. In tandem with these local projects, the United States has raised its climate response, rejoined the Paris Agreement, and set ambitious goals to reduce greenhouse gas emissions and slow global warming. This work by the United States, alongside its global Covid-19 response including more than 45,000 free vaccines for Grenada, demonstrates its partnership with Grenada for a more secure, prosperous, and democratic Caribbean.

NOW Grenada is not responsible for the opinions, statements or media content presented by contributors. In case of abuse, click here to report.
Tags: cecile la grenadeindependencekarl duckworthus embassy
Next Post