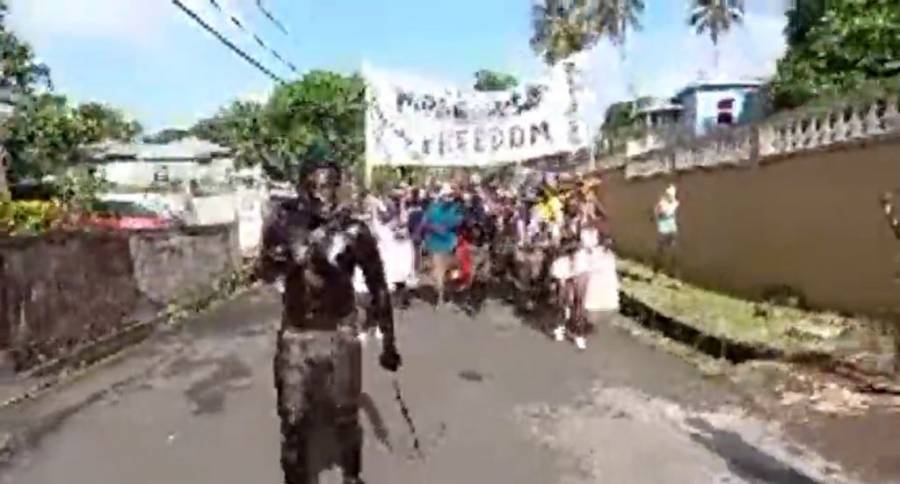 This story was posted 10 months ago
in Arts/Culture/Entertainment, Community, Health
2 min. read

Despite the Houses of Parliament approving the cancellation of Carnival Monday and Tuesday celebrations and the days to be observed as normal working days, hundreds of individuals from various communities across Grenada defied that order and were seen engaging in Jab Jab J’ouvert celebrations.

An official from the Ministry of National Security said that there were small pockets of jab jabs in different communities in particular St Paul’s and St Mark parish, with the largest gathering in St Andrew.

Beating drums and buckets along with blowing whistles, horns and other instruments, hundreds of jab jabs under a banner “More Jab… Freedom” chanted their objection to the cancellation of carnival, the current ruling administration as well as their opposition to Covid-19 vaccination, through their communities as they began a journey to the eastern town of Grenville.

“The mob is heading to Grenville,” said the narrator in a live feed transmitted on the Grenada Broadcasting Network (GBN) Facebook page.

However, as the jab jabs approached Paradise Bridge, a contingent from the Rapid Response Unit and other departments blocked the road with police vehicles and formed human chains, causing the revellers to abandon the journey.

The live Facebook feed showed a small number of revellers diverting to cross the river beneath the bridge to continue the journey. About an hour later, the revellers were diverted to the airstrip of the former Pearls airport in St Andrew. By midday, police were unable to confirm if there were any individuals detained or arrested.

The carnival celebrations cancellation was part of measures taken by the Government to contain and control the spread of Covid-19. In 2020 the Government also cancelled the traditional August celebrations. Covid-19 continues to spread throughout the world and there are currently different variants of the virus. Grenada, at present, has 11 active cases.

NOW Grenada is not responsible for the opinions, statements or media content presented by contributors. In case of abuse, click here to report.
Tags: carnivalcoronaviruscovid-19jab jabjouvertlinda strakerministry of national securityparadise bridgepolice
Next Post