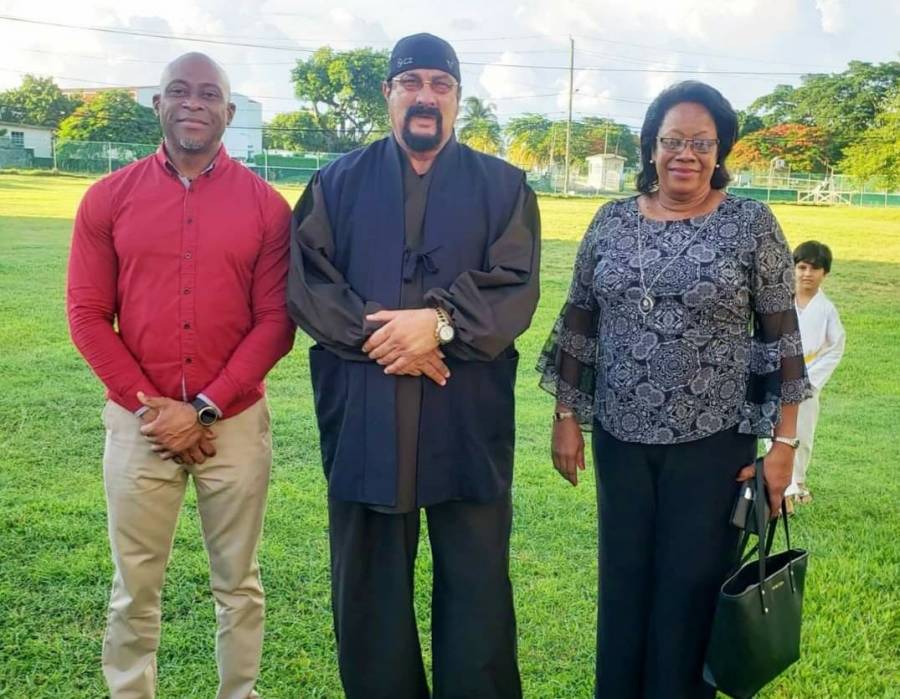 This story was posted 9 months ago
in Arts/Culture/Entertainment, Business, Politics
2 min. read

Steven Seagal, the American-born actor with Russian citizenship, is currently in Grenada in what appears to be business opportunities exploration in the areas of the performing arts and tourism.

His trip to Grenada comes weeks after attending a reception at the Grenada Embassy in Russia. It is not known who invited him to the reception, but photos of him at the reception are posted on his Facebook page. The reception held on 5 July 2021 was to celebrate the 48th anniversary of Caricom.

It’s not certain when he arrived or when he is expected to depart, but it is understood that the actor was invited to the island by Oleg Firer, Grenada’s Ambassador to Russia, who is also visiting the country.

Seagal received his Russian citizenship in 2016, and in 2018 was appointed an ambassador for humanities by the Russian Foreign Ministry. In June 2021, Seagal who is a musician and martial art expert officially joined the Russian political party “A Just Russia For Truth” which is a pro-Kremlin organisation.

Seagal so far has been photographed with Health Minister Nickolas Steele at the construction site of Six Senses La Sagesse — a Citizenship by Investment (CBI) tourism construction — and with Culture Minister Yolande Bain-Horsford and her Permanent Secretary Michael Stephens. According to a photograph posted on the Ministry of Culture and the Arts Facebook page, Seagal and his team met with the ministry “to discuss the performing art and possible plans for building a studio in Grenada.”

NOW Grenada is not responsible for the opinions, statements or media content presented by contributors. In case of abuse, click here to report.
Tags: linda strakernickolas steelesix sensessteven seagalyolande bain-horsford
Next Post