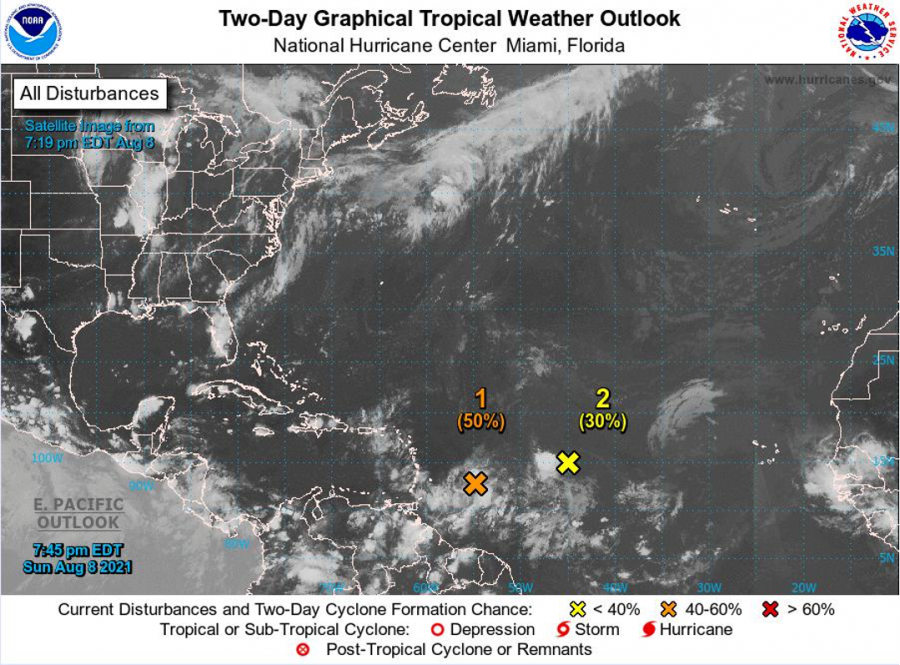 Tropical wave: The axis of a tropical wave is along 66° W, south of 21° N moving westward 10 to 15 knots. Despite the axis of the wave being to the west of Grenada, a band of trailing moisture is now sweeping across the Lesser Antilles. Radar imagery is depicting showers of varying intensity moving across the islands. There is also a medium chance of thunder. This activity is expected to lessen as the night progresses.

Low pressure system: A low pressure system located about 400 miles east-southeast of the Leeward Islands is producing disorganised showers and thunderstorms. However, environmental conditions are expected to be conducive for gradual development over the next few days, and a tropical depression could form while the low moves west-northwestward at about 15 mph. The disturbance is forecast to reach portions of the Lesser Antilles by late Monday, and then move near the Virgin Islands and Puerto Rico on Tuesday and be near Hispaniola around the middle of this week. Tropical storm watches or warnings could be required with shorter-than-normal lead times for the Leeward Islands, Virgin Islands, and Puerto Rico. In addition, heavy rains and flooding are likely for the Leeward Islands, Virgin Islands, Puerto Rico. Grenada can experience showery activity and a medium chance of thunder from Monday into Tuesday as moisture associated with this system moves overhead. There is also a medium chance of flooding and landslides in vulnerable areas. This system has a medium chance (50%) of becoming a tropical cyclone within the next 48 hours and a medium (60%) chance through 5 days.

Low pressure system: Disorganised showers and thunderstorms have changed little in association with an elongated low-pressure system located over the tropical Atlantic about midway between the Cabo Verde Islands and the Lesser Antilles. Although environmental conditions appear to be only marginally conducive for development, this system could still become a tropical depression later this week while it moves toward the west or west-southwest at around 10 mph. This system has a low chance (30%) of becoming a tropical cyclone within the next 48 hours and a medium (40%) chance through 5 days.

The Meteorological Service will continue to monitor these systems.

The next update will be issued at 2 am.

Register with Fisheries Division prior to setting up mariculture farms