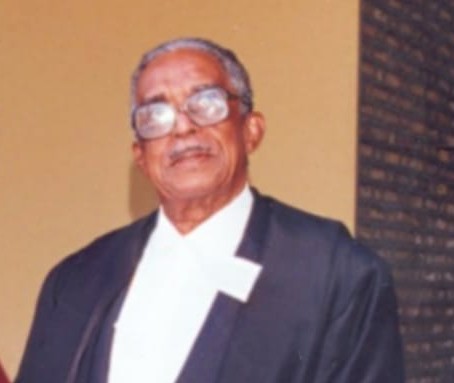 This story was posted 9 months ago
in Law, Tribute
2 min. read

Another legal icon has passed on, gone to the great beyond to meet, greet and brief other greats preceding him, including conveyancing gurus Ovid Gill (2009), Ernest Wilkinson QC (2012) and Carol Bristol QC (2014), and constitutional and other legal gurus like his close colleagues Derick Knight QC (2008) and Edwin Heyliger QC (2010).

Cosmo St Bernard CBE QC leaves us as arguably the longest-serving practitioner ever, not just in Grenada, but the OECS.

In June 2016, when he was an impressive and record-breaking 65 years at the Bar, the Grenada Bar Association honoured him as the “longest-serving practitioner”. Of his long and productive 96 years (only days shy of his 97th birthday), he has given a record-breaking 70 solid years of service to the Bar – no easy feat, if not unbeatable.

We salute Cosmo for his invaluable and dedicated service to the legal profession. His lines were always open to us to share his widespread knowledge and experience and to give guidance and advice.

The passage of time never dampened Cosmo’s enduring spirit and indomitable will to press on, determined to go with his “boots” on. He inspired all with his energy, enthusiasm, passion and love for the law, in particular conveyancing.

No doubt he will also be looking forward to meeting his GBSS schoolmate and lifelong friend Julius Alexander Isaac, great Grenadian and fellow St Paul’s man elevated from Chief Magistrate in Grenada to Chief Justice of the Federal Court of Canada (1991–1999), the first black man to ever achieve that honour – and another icon honoured by the Eastern Caribbean Supreme Court and the Grenada Bar/OECS Bar Association in March 2000.

A resilient stalwart in the law with a remarkable and enviable, unparalleled career of legal service.  He now joins the greats of that vintage lawyers’ row who have preceded him.

We extend sympathies to his children and colleagues, Deborah and Trevor on the loss of their dad, and to the wider family and also staff of Lewis & Renwick.

NOW Grenada is not responsible for the opinions, statements or media content presented by contributors. In case of abuse, click here to report.
Tags: cosmo st bernardgrenada bar association
Next Post