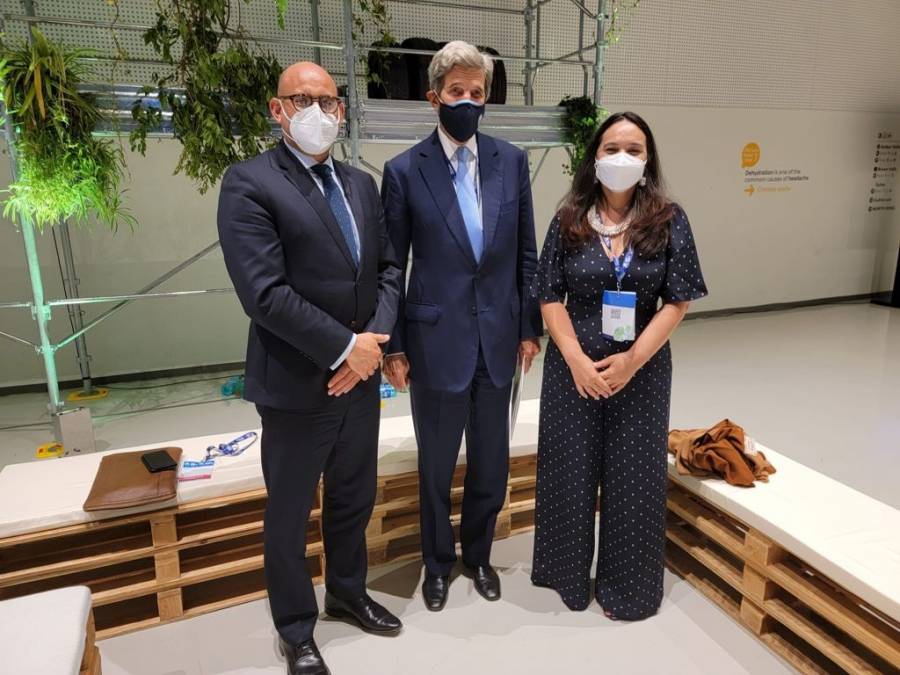 Ministry for Climate Resilience and Environment building momentum ahead of COP26

Ministry for Climate Resilience and Environment building momentum ahead of COP26

This story was posted 9 months ago
in General News
2 min. read

Grenada’s Ministry for Climate Resilience and the Environment is actively engaged in building momentum ahead of the United Nations climate change conference, COP26, taking place in Glasgow from 31 October.

In the last few weeks, Minister responsible for Climate Resilience and the Environment Senator the Honorable Simon Stiell participated in international meetings in the United States and Italy.

In New York, on the margins of the United Nations General Assembly, his itinerary included meetings with leaders from the Alliance of Small Island States, the United Nations Secretary General’s office, and members of the High Ambition Coalition (HAC), which the Minister is currently co-chairing with his counterpart Tina Stege, Climate Envoy for the Marshall Islands.

The Minister engaged with key international counterparts to push for the urgent action needed to keep the 1.5oC goal within reach, and to increase and improve access to finance for developing countries already struggling with the impacts of climate change.

During the pre-COP26 in Milan, Minister Stiell co-led a breakout group on how countries must take more action on climate change in line with the 1.5°C goal of the Paris Agreement. The group included ministerial representatives from China, the US, India, Russia, the European Union, and Japan, amongst others.

In the discussion, the gap between government’s current targets for 2030 emissions and where they need to be to halt warming at 1.5°C, was unanimously highlighted as an issue to be tackled ahead of COP26 and in the ensuing years as the 2030 deadline approaches.

The Minister’s summary of the discussion emphasised to all national representatives that those countries who have not yet submitted updated 2030 climate targets and plans, known as Nationally Determined Contributions (NDCs), should do so as soon as possible before COP26.

He also stressed the need for a paradigm shift in the global response to adaptation, and the importance of dedicated financing for loss and damage — those impacts from climate change that can no longer be avoided or reduced — given the grave risks that vulnerable countries are facing in a warming world.

The G20 meeting in late October was also acknowledged as an important opportunity for countries which have some of the highest historical responsibility for emissions, to announce more ambitious climate plans.

“As a small island, which is incredibly vulnerable to the impacts of climate change, it is really important that Grenada’s voice and perspective is heard in these international discussions,” Minister Stiell commented. He added, “In Grenada, we are already seeing devastating impacts of climate change at 1.1°C of warming — so the global effort to reduce emissions and keeping to the 1.5°C temperature limit is really critical for the protection of our environment and our economy.”

The Minister will travel to Glasgow, Scotland, in late October to represent Grenada at COP26 and further engage to push for more ambitious action on climate change.

NOW Grenada is not responsible for the opinions, statements or media content presented by contributors. In case of abuse, click here to report.
Tags: climate changecop26gisparis agreementsimon stiell
Next Post