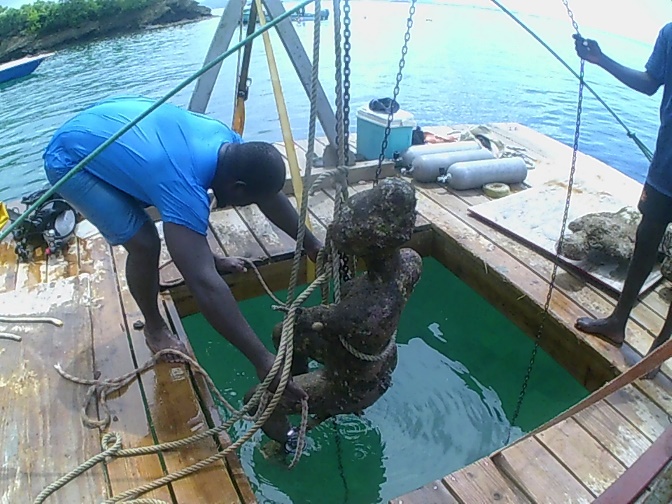 Sculpture brought to the surface for cleaning and repair
Share

The Grenada Tourism Authority (GTA) has announced that the renovation project for the Grenada Underwater Sculpture Park, located off the West Coast of Grenada in the Molinere Beauséjour Marine Protected Area, has been completed.

Heralded as one of the “Top 25 Wonders of the World” by National Geographic, the park was envisioned by British sculptor Jason DeCaires Taylor and is accessible to both snorkellers and divers. The Grenada Underwater Sculpture Park was opened in 2006 and was the first of its kind in the world. It has become one of the destination’s most beloved attractions.

The installation includes 82 life-size sculptures that reflect Grenada’s culture and are fashioned from a variety of media but predominantly from simple substrates including concrete. They create an ideal substrate, relatively fixed and permanent, on which marine life may develop.

One of the park’s most famous sculptures is the Vicissitudes, a circle of 28 figures cast from local Grenadian children linked by holding hands. Other notable pieces include the “Lost Correspondent,” a man working at a typewriter on desk covered with historical newspaper cuttings; “Sienna,” an elegant sculpture that depicts the graceful figure of a young skin diver from a much-loved local story; and “TAMCC Faces,” a series of life-sized faces seemingly moulded into the crevice of a large coral boulder which involved students of the local community college.

Over time, the sculpture park has been affected by natural environmental forces. Thus, to preserve its integrity, restoration efforts were initiated to maintain the environmental suitability and contribution to the vast marine life that it brings. These efforts varied from repairing and cleaning specific structures to removing and relocating others.

“The Grenada Underwater Sculpture Park is a national treasure and its maintenance is important to the upkeep of the pure allure of Grenada’s waters,” said Petra Roach, CEO, Grenada Tourism Authority. “Innovatively designed to act as an artificial reef, the park has attracted a stunning array of diverse marine life to the area since its installation and provided a surface for coral to grow, which is ultimately important to our ongoing preservation efforts and commitment to combat the ravages of global warming. We at the Grenada Tourism Authority will continue to advocate for and support such projects in order to ensure the destination’s viability and sustainable efforts.”

From colourful coral reefs, spectacular shipwrecks, to exhilarating drift dives and a unique underwater sculpture park, Grenada, Carriacou and Petite Martinique is a diver’s paradise. With more than 50 sites of intriguing underwater wonder to be discovered, it’s no wonder that divers of all levels from around the world are attracted to the destination.