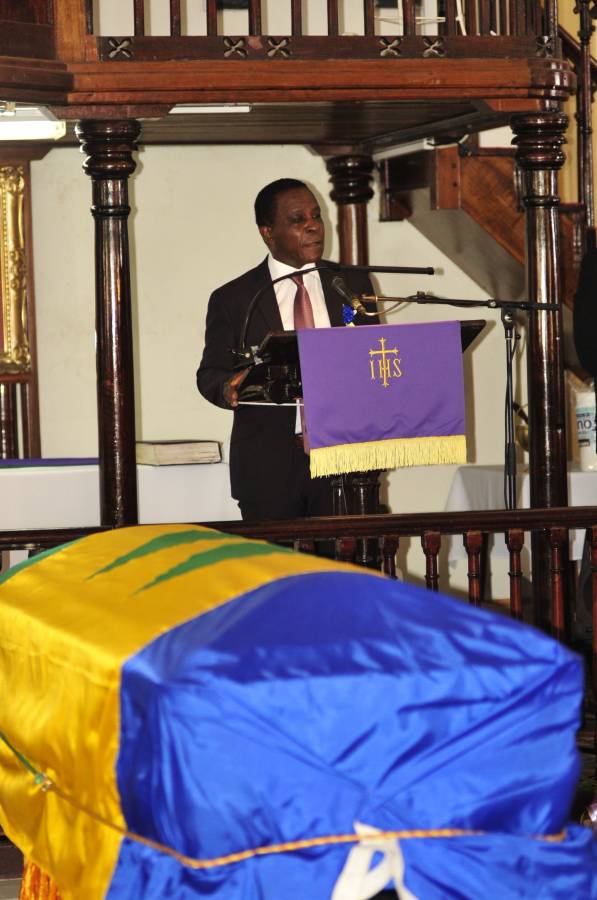 This story was posted 9 months ago
in Politics, PRESS RELEASE, Tribute
3 min. read

In a tribute delivered at the Kingstown Methodist Church, Dr Mitchell described Sir James as “an upstanding Caribbean national, greatly revered for his political acumen, his love for country, his humility in service to people and his commitment to regionalism.”

Sir James was a long-time friend of Grenada’s Prime Minister. In fact, Dr Mitchell credits him with being a central figure in his emergence as a leader and he commended his humility.

He said, “From humble beginnings in Bequia, Sir James maintained humility throughout his life and turned out to be a Caribbean leader of the highest repute. Humility and love for people are essential attributes of any successful politician or service-oriented person. And any display of arrogance is likely to undermine whatever goodwill is created among supporters. Sir James was the epitome of a good politician. He was not only well-respected at home, he also played a significant role in political and other developments elsewhere in the Caribbean.”

Dr Mitchell first met Sir James in 1972 when he captained the Grenada cricket team and they played against St Vincent. Years later, that relationship was rekindled when he became involved in politics and Dr Mitchell spoke at length about his gratitude for the guidance Sir James provided.

He said, “In 1995, when I became Prime Minister, Sir James was the first to reach out – and his advice and guidance were pivotal especially in those early days. And throughout my career, he always made himself available to give advice. Reflecting on this longstanding friendship, I can say in all honesty that Sir James is the one regional politician that I have had the closest relationship with. Our enduring friendship was also mutually beneficial to Grenada and St. Vincent, as we consistently forged united positions at various fora in promoting our joint interests and the interests of the sub-region.”

Legend, hero, stalwart, exemplary leader were some of the words the Grenadian leader used to describe Sir James, and he reflected on the many important lessons he learnt through his friendship with the former Vincentian Prime Minister.

Dr Mitchell said, “I have personally learned a lot from Sir James, including the endearing value of friendship, and the redeeming nature of political tolerance, something I believe is sadly lacking among many politicians today. We can be political opponents, but when it comes to matters of national interest, we must be able to put those differences aside and do what’s best for the country and our people.”

He added, “Sir James had many epic political battles at home against Brother Ralph Gonsalves – but I never ever sensed that he had any bitterness towards him. He highly regarded the skill and acumen of Prime Minister Gonsalves. His legacy is one of country above politics. Indeed, we all will do well to honour him by the way we show respect to our opponents; and to understand that political battles are not among enemies, but among patriots who are determined to promote their own vision for the development of their people.”

Sir James was laid to rest on 18 December, following a state funeral that began on mainland St Vincent and culminated on the sister island of Bequia.

NOW Grenada is not responsible for the opinions, statements or media content presented by contributors. In case of abuse, click here to report.
Tags: bequiagisjames mitchellkeith mitchellralph gonsalves
Next Post