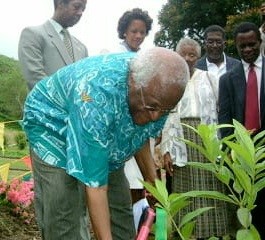 “I would forever remember the strength of character he displayed in molding South African society after the end of apartheid. Had it not been for his strength of character, and that of the late Nelson Mandela, what unfolded in the post-apartheid era could have been far different.”

The words of Prime Minister, Dr the Right Honourable Keith Mitchell as he reflected on the life of Archbishop Desmond Tutu who died on 26 December.

Dr Mitchell met Archbishop Tutu during his visit to Grenada in 2004 and was part of a tree-planting ceremony at the Sir Eric Matthew Gairy Botanical Gardens. In his remarks during that ceremony, the Prime Minister said, “We have much to learn from Archbishop Tutu who has demonstrated that embracing peace requires a strong will and unwavering faith.”

Now years later as he recalled that occasion, the Prime Minister said, “The Archbishop’s visit was a memorable one and he shared many stories which heightened my respect for him and the significant role he played in ensuring that South African society did not erupt into chaos. He demonstrated great strength of character and I admired that. He was a champion for peace and racial justice and advocated always for what was right. The world has lost a great man.”

NOW Grenada is not responsible for the opinions, statements or media content presented by contributors. In case of abuse, click here to report.
Tags: Botanical Gardensdesmond tutugiskeith mitchellnelson mandela
Next Post